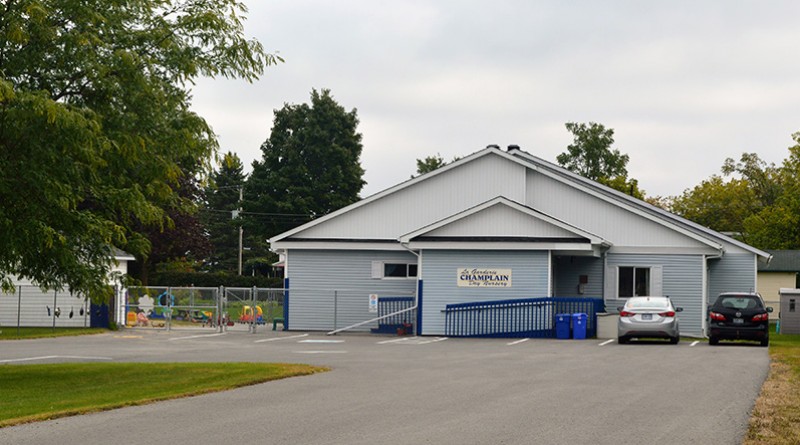 Champlain Township council has tabled a report which recommends relocating the township’s day care services to space at École élémentaire St-Grégoire in Vankleek Hill.
“I have concerns about this,” said Champlain Township Mayor Gary Barton. “I would like to put a hold on this until there is further exploration,” Barton added.
The report recommends relocating day care services at the end of June 2017.
The move is being considered after the township was approached by Conseil scolaire de district catholique de l’Est ontario Superintendant and Treasurer Martin Lavigne contacted the township about establishing a day care program at École St-Grégoire.

Currently, before and after-school day care programs exist at both École St-Grégoire in Vankleek Hill and at École St-Jean-Baptiste in L’Orignal (both of these schools are part of the Conseil scolaire de district catholique de l’Est ontarien. These services, which have been in place for the past 15 years, are coordinated and staffed by the Champlain Township day care department. The township pays 40 cents per square foot of space at École St-Jean-Baptiste for its before and after-school program; the annual amount is $1,037.

Benefits cited in favour of the relocation include reduced overhead costs, a “one-stop” service for parents who may already have older children attending École St-Grégoire and the potential sale or re-purposing of the existing building at 79 Derby Avenue in Vankleek Hill.

The Conseil scolaire de district catholique de l’Est ontarien (CSDCEO) has assured the township that it has sufficient space at École St-Grégoire to enable the township to maintain its enrolment and that services would continue to be bilingual. The school board would renovate and establish rooms within the school and space in the playground to accommodate day care needs. Any rental or lease  amounts paid to the school board would be placed in a reserve for use for building maintenance and equipment purchases for the day care facility. The township currently pays 40 cents per square foot for space at École St-Grégoire.

The estimated annual overhead for the existing day care facility is $40,400, according to the report provided to council. Relocating the day care to École St-Grégoire at the end of June 2017 would result in savings of $20,200 for 2017. But move-in costs and set-up expenses are estimated at $10,000.
Options also include selling the building, which would eliminate the $40,400 per year in maintenance, insurance costs, etc.
The building could also be re-purposed for use by the township.
The report also warns that École St-Grégoire “will most certainly be setting up a day care which will directly compete with our (the township’s) service and potentially reduce our enrolment and increase the cost to users.”
The Derby Avenue day care building received a major overhaul in 2013, resulting from an insurance claim when roofing contractors in the process of installing a new roof failed to secure the building and heavy rainfall infiltrated and caused extensive water damage. As repairs began, evidence of asbestos and mold was discovered and an environmental engineer was engaged; the township filed a claim with its insurance company. Ultimately, the cost of the renovations ($443,289) was almost entirely covered by the township’s insurance company.  The environmental clean-up, the purchase and installation of a new gas heating/ventilation system, the insurance deductible and the loss of revenue due to restrictions to the number of children at the day care’s temporary location at Knox Presbyterian Church were not covered; in the end, $17,670 was requested from Asco Construction.
It costs $30.50 per day to place pre-schoolers at the Champlain Day Care facility. The cost for non-residents is $31.65 per day. The cost for toddlers is $32.50 per day for Champlain Township residents and $34 for non-residents.
Recent enrolment figures were that 29 of a possible 39 spaces were filled at the day care facility.

louise has 1343 posts and counting.See all posts by louise