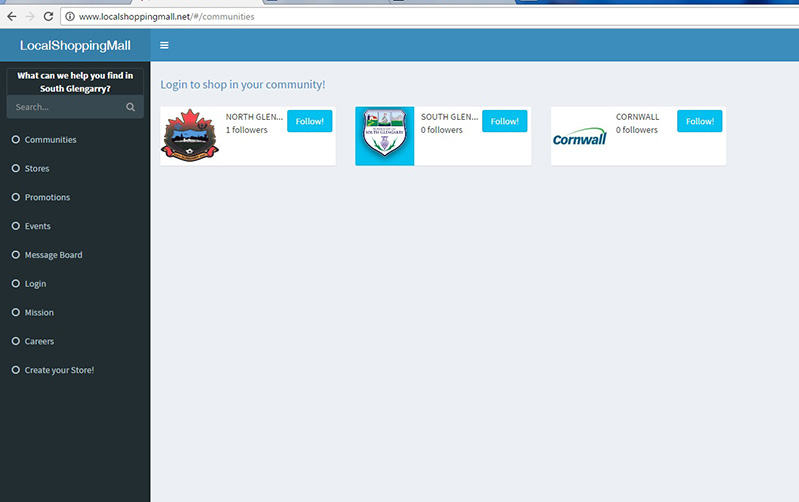 A business in Alexandria is hoping its new “Local Shopping Mall” website will appeal to local businesses across Ontario and Canada.

Michael Madden and his partner Alain Legault developed Local Shopping Mall as a way for small local businesses to advertise and sell products online. It’s organized by community, and businesses can cross-post to Facebook. Madden says he’s excited about the website’s potential. “Really from our perspective, it can apply for any and every business, and even not-for-profits,” he says.

The idea is to make all businesses in an area visible and accessible in one spot online. “The end goal is really to try and bring back communities to the way they used to be,” said Madden. “The little guys aren’t in any position now to compete against the big guys.” Visitors to the website can see all the stores in a community, and participate in discussions on a message board. You can also order products directly from a store on the website, and Madden said he and his partner are working on a shipping arrangement with Canada Post. The original idea was to promote a “pick-up in store” option, in the hopes of driving more customers into local shops, but Madden said businesses want to be able to sell to people who aren’t local, as well.

This summer, Madden started working with local businesses in Alexandria, who were offered a free membership in exchange for feedback. He says most participants were happy with the service, but the big challenge is getting people who aren’t already online to sign up. The real issue is “some people who are comfortable in how they exist now, and not necessarily comfortable with the internet and e-commerce,” said Madden. “The uptake is a little slower than we’d like.”

They hope to make using the website as painless as possible for internet novices: Madden says it’s been designed with some similarities with Facebook, so people who are used to using that service will be somewhat familiar with the interface. The company has also been offering workshops in Alexandria. He says for companies without a website, signing up for Local Shopping Mall will be cheaper compared with paying for an independent website.

The beta stage will be over in 2017, and Madden, who is the past president of the Alexandria Chamber of Commerce, says the next step is to approach the Cornwall Chamber of Commerce and the Ontario Chamber of Commerce. “That’s just the first half of next year,” he says. The network of chambers of commerce is “very large and very viable,” says Madden. When members of a chamber of commerce sign up for the website, Madden says a portion of the sign-up fee will be given to the chamber, creating a revenue stream.