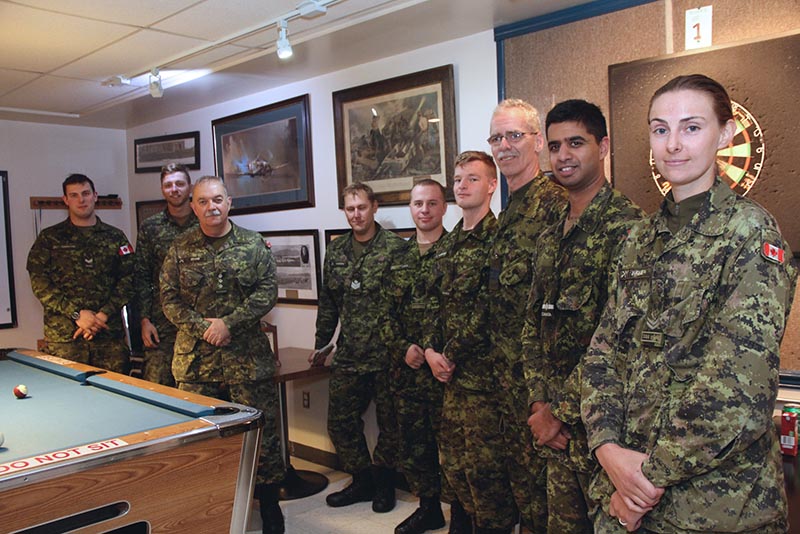 On Saturday, October 29, 15 infantry reservists from the Stormont, Dundas and Glengarry (SD&G) Highlanders unit marched through Alexandria as part of a training exercise. (Photo: Tara Kirkpatrick)

The rain was coming down in a steady drizzle on Saturday morning, as 15 reservists from the Stormont, Dundas and Glengarry (SD&G) Highlanders marched through Alexandria. The infantry reservists were carrying a minimum of 24.5 kilos (or about 56-pounds) of gear in their rucksacks. This didn’t include the weight of their rifles, which were not loaded for the exercise.

The march was part of a 13-kilometre load-bearing exercise, which fulfills an annual “individual battle task standards,” fitness requirement. 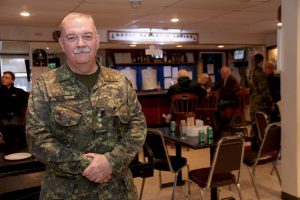 SD&G Highlanders Captain James (Jim) Devine, who is the unit’s operations officer, told The Review that the march went well. The soldiers got off to an early start and they finished the exercise in good time. He credits these physical exercises with keeping his unit battle-ready and in good shape.

“In the infantry, our feet are our transportation. Your trucks may not show up, your helicopter may break down, but you always have your feet,” said Devine.

Marching continuously for 13-kilometres, while loaded-down with gear isn’t a task to be taken lightly. Devine said that the best way to prepare is to just put on a rucksack and go. The trick is to make sure that you gradually increase both your weight and distance. Making sure your load is balanced is also important.

“We have a really good gym at the armoury and we have experienced instructors to train our reservists for a number of skills,” said Devine.

Justin Towndale is a Cornwall city councillor who recently joined the unit. He applied in 2013 and was sworn into the Highlanders unit last March. It was Towndale’s first load-bearing march and he said he was relieved it was over and eager for his next exercise.

“It’s something you need to prepare for,” said Towndale, who noted that it was a pretty extreme exercise for calve muscles. He joked that his fellow councillors should join him on the next march.

The SD&G Highlanders currently have 77 members and the unit is recruiting.

Devine joined the reserves in 1977 and he has spent nearly 40 years working for the unit as a part-time, fulltime and regular reservist. During his day job, Devine trains new agents for Canada Border Services, at its training centre in Rigaud.

“I’ve served all over Canada, the United States, Bosnia and Croatia. I’m one of the few Canadians who served in the Republic of Georgia, in 2002. Only 32 Canadians participated in that mission which was part of a NATO training exercise,” said Devine.

He says the biggest thing the military has taught him is that people underestimate themselves.

“I learned that there are no limits. People are capable of doing 90 per cent more than they actually think they can do. Military service, particularly the infantry and the combat arms units, will stretch your physical and mental limits,” said Devine.

He says that family is the backbone of a strong soldier or reservist. “For a reservist, the biggest challenge is balancing your two lives. You have the military and civilian life and on top of that, you have your personal life. You need to be able to balance your time and resources. With experience, it gets easier. If you don’t have the support of your family, it can be difficult,” said Devine.

Reservists train one night each week and one weekend each month. New recruits may train more extensively during the first year.

You can find out more about the SD&G Highlanders here.