“Save our Schools” movement sparked in Glengarry 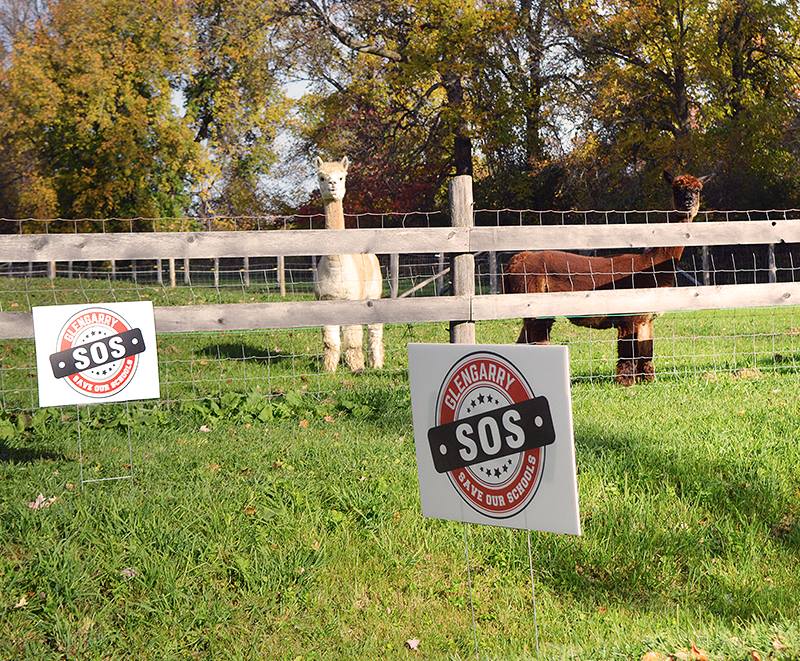 “Save our schools” lawn signs in Glengarry. (Photo: Facebook)

International students who’ve been studying at GDHS (Glengarry District High School) are not happy about potential school closures and neither are their sponsors.

Bob and Jackie Proulx of Alexandria are members of the Canada Home Stay Network, an agency developed to help young people from around the world discover a healthier social life while studying at Canadian high schools.

“The students we’ve hosted really benefit from their time at the high school,” says Bob Proulx who, along with his wife Jackie operate Touch of Dutch south of Alexandria, a country store now offering “Save Our School” T-Shirts for $10. The couple hosts students who stay with them for the entire school year while they attend GDHS.

Proulx explains that many foreign students, especially from big cities, benefit from the small town atmosphere and take home with them an understanding of what it’s like living and working together in a rural Ontario community, something very different from where they come from.

“We won’t be able to do that anymore if we become the mega schools the (Upper Canada District School) Board is suggesting.,” says Proulx, implying that this decision to close rural schools will likely not entice further foreign educational investment in small towns.

Students from as far as New Zealand have come to study at GDHS. “We need to find a solution to help keep our rural schools alive and keep foreign students coming back. It’s good for our community, it’s good for Canada and it’s good for these families from other countries,” said Proulx.

Proulx explains that the grade nine student from Mexico they now host is enjoying his life in Alexandria at the high school and is anxiously awaiting his family to arrive as soon as the snow comes.

“He can’t wait to see snow,” says Proulx who doubles as a school bus driver for Laggan Public School and GDHS students. “He’s never seen the fluffy white flakes and his family is so excited to arrive here to see it.”

Proulx describes how just the other day, the Mexican GDHS student was cutting their grass wearing a tuque in  anticipation for snow. The family plans to stop in Alexandria for a while and then go on to Tremblant if they can.

The host is concerned about school closures not just for the foreign students and the local community, but for the North Glengarry kids he picks up and drops off within the Laggan and Alexandria district.

School board communications director Cindy Peters agrees that more than one hour on the bus is not conducive to school board policy.“We’ll do everything we can to make sure kids are not on the bus for too long,” says Peters who could not confirm that bus rides would be less than one hour.

The school board (UCSBD) began a “pupil accommodation review” a few months ago. It was decided that 29 schools be slated for closure based primarily on, according to Peters, financial concerns. At the North Glengarry township meeting held October 13, a recommendation to establish a committee to assist with coordinating efforts by the committee as a whole was introduced to address the potential closure of six Glengarry schools.

The township agreed to commission a study to outline the negative economic impact of school closures on the area and municipal facilities including the indoor soccer dome, the Alexandria and Maxville arenas. It is estimated it will take three weeks and cost $4000.00.“Other businesses like Genuine Convenience and Quirky Carrot where high school students go for lunch will also be affected,” says Proulx.

Council members appointed to the committee were Jeff Manley and Brian Caddell. Both have been teachers in the area and have an interest in school life in Alexandria. “We hope we can keep the schools open,” reiterates Proulx. “They’re so important to our foreign students and to the life of our community.”