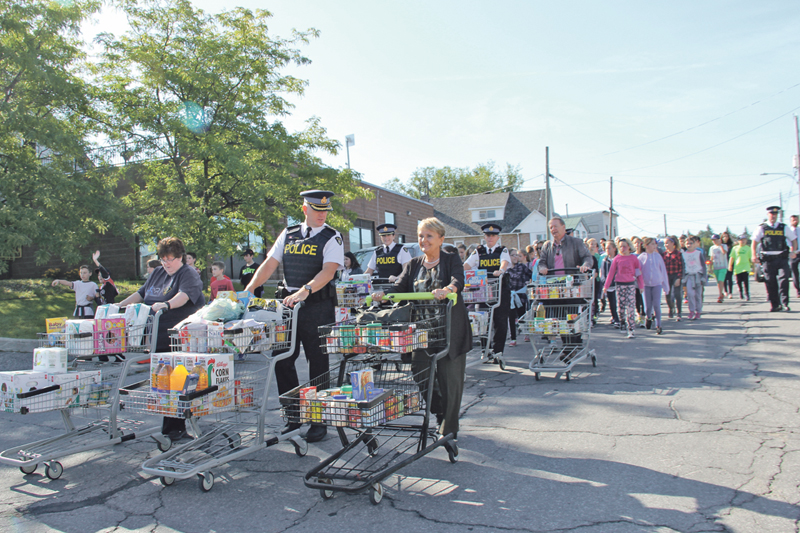 It’s not a crime to be hungry, but it’s a problem that Ontario Provincial Police (OPP) Constable Mario Gratton says needs to be addresses. Gratton is the community outreach officer for the Hawkesbury detachment of the OPP.
When he patrols through the community, Gratton says that he often encounters families in need. Many of them depend on food banks to survive.

“I’ve been told by members of the local food bank that September is one of the worst times of the year. Kids are returning to school and there are a lot of expenses associated with that. It leads to more demand at the food banks,” said Gratton.

In order to help raise awareness and to collect food for the local food banks, members of the Hawkesbury OPP Auxiliary Unit recently parked a police cruiser outside of a number of local grocery stores and they collected food donations. Members of the Smiths Falls Provincial Communication Centre also supported the cause, collecting funds, which they then used to purchase food to support the drive.

On September 16, more than a dozen police officers were joined by members of the Hawkesbury OPP Auxiliary Unit, local politicians and around 70 local school children. Together they marched from the Hawkesbury OPP detachment to the Hawkesbury Central Food Bank, which is located on Main Street. They pushed more than a dozen shopping carts loaded with food. On arrival at the food bank, the children helped to unload the donation. They had the chance to meet with the food bank volunteers and to learn about the needs of their fellow citizens.

The donation was delivered to the Hawkesbury Central Food Bank, but will also support food banks in Riceville, Alfred, L’Orignal and Vankleek Hill.

“I wanted to make sure to include all of the food banks in the area that our detachment serves… This initiative was intended to help our residents. It’s not the quantity of food that we collected that was most important. What we are trying to do is to raise awareness about the need to donate to our local food banks,” said Gratton.

Hawkesbury Central Food Bank Coordinator Suzie Hinson applauded the initiative, which she said would help many families in need.

“There are too many people who think the police are only there to arrest you. That they are doing something to help, while also involving the schoolchildren, is really wonderful. Many of these students may even come back after this to volunteer with us,” said Hinson.

The Hawkesbury Central Food Bank serves around 350 families each month. Demands are higher in the fall and at Christmas. With the return of school, there is a particular demand for school-friendly food items, such as juice boxes and snacks.

“Poverty is everywhere. The population of people in need depends largely on the size of your municipality. It’s everywhere and in a lot of instances it’s hidden. Hard times can happen to everybody and that’s why food banks are open to everyone,” said Reverend Robert Martin, of the Vankleek Hill Food Bank, which serves between 40 and 50 people on a regular basis.

Hinson said that the Hawkesbury Central Food Bank is supported by a number of local businesses. They supply the food bank with items that are still safe to consume, but which may no longer be perfect. This could include dented cans, or items nearing their expiry date. Local farmers and gardeners also donate fresh produce, which Hinson says is in particular demand and goes quickly.