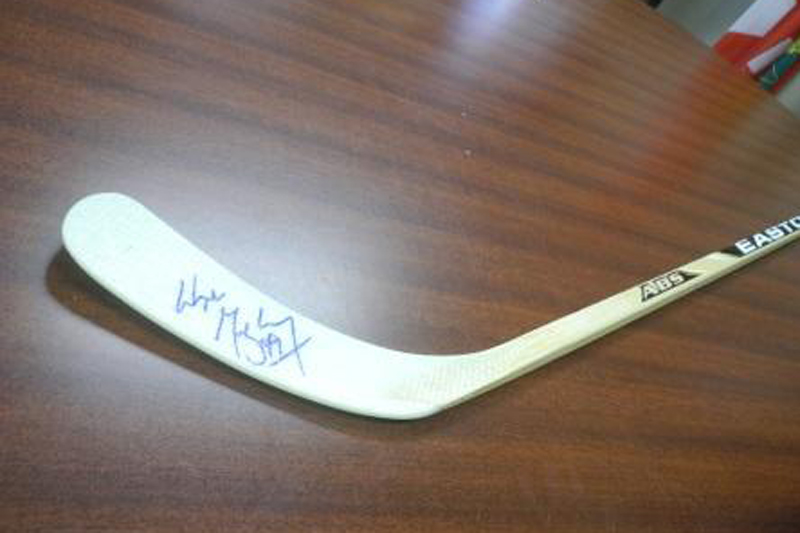 A hockey stick signed by Wayne Gretzky is one of many items to be auctioned at the Push for Change Charity Auction, which will be held in Hawkesbury on September 22.

Joe Roberts is a former street youth turned successful entrepreneur who is pushing a shopping cart across Canada to help end youth homelessness. He is raising money and awareness along the way for the “Push for Change” organization, which aims to prevent youth homelessness by making sure at-risk young people have support in schools.

On September 22, beginning at 11 a.m., hundreds of local high school students will be joining the walk. OPP spokesperson Constable Mario Gratton told The Review that Grade 12 students were asked to participate, because they represent an at-risk group of youth. They will soon be leaving home to embark on the start of their adult lives. Gratton said that this can be a fragile time for many youth who are unprepared for the responsibility. He said that it’s important to talk to youth about homelessness and to let them know that resources are available to help them.

Representatives of the Ontario Provincial Police (OPP), and “special guest” Walter Gretzky will also be joining the walk with Roberts from Confederation Park, in Hawkesbury to the Robert Hartley Sports Complex. Gretzky is the father of Canadian hockey icon Wayne Gretzky. There will be a ceremony beginning at 12:15 p.m. at the sports complex, and later, beginning at 5 p.m., a silent auction including sports memorabilia, entertainment and a cash bar at the Royal Canadian Legion in Hawkesbury (152 Nelson Street East).

The Rotary Club of Hawkesbury has partnered with the OPP to host the auction. Some of the items to be auctioned include hockey sticks and printed photos signed by Wayne Gretzky and an autographed book written by Bobby Orr. Tickets for the event are still available. They cost $25 each and can be purchased at the door.

On Sunday, September 30, Russell County Detachment of the OPP will be hosting a barbeque for Roberts at the Jean-Marc Lalonde Arena, located at 1450 Avenue du Parc, in Rockland. The barbeque runs from 10 a.m. until 2 p.m., with proceeds benefitting the “Upstream Project,” of “Push for Change.”