Joey Ladouceur comes back from crash to win at Oswego Speedway 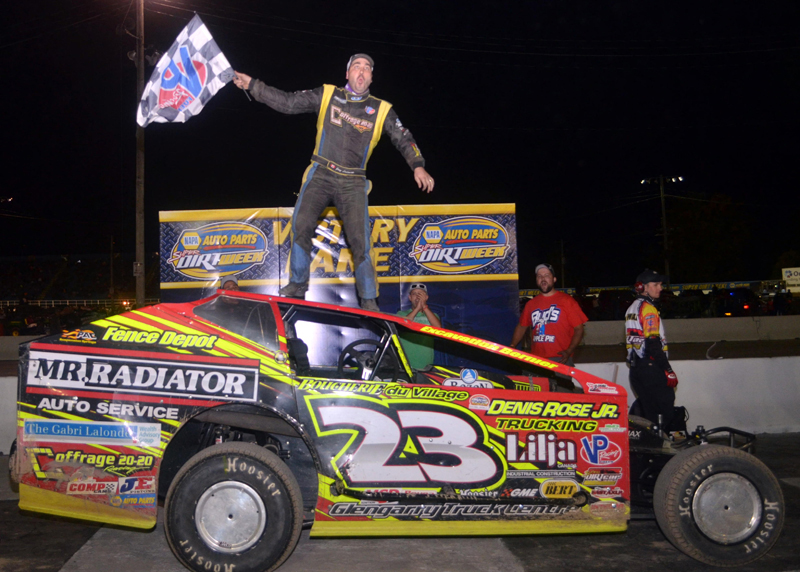 Super DIRT week at the Brewerton Speedway, in New York started off badly for Alexandria racer Joey Ladouceur. The DIRT Pro-Stock champion hit the concrete wall on Thursday night, making a hard contact that damaged his car, but left him without injury.

“With the precious help of Bicknell Racing Parts, we changed all of the car’s front clips and we managed to be ready just on time for Friday’s Futures race at Oswego,” said Ladouceur, who spent the week competing at the 2016 Super DIRT Week, which was held at various courses in New York State.

It was Ladouceur’s first time competing in the event with his 358-Modified machine. He was following in the footsteps of his father, Laurent, who spent decades competing in the #23 Mr. Radiator car, which is now driven by his son.

After his crash on Thursday night, Ladouceur came back to the track and dominated the 358-Modified Class Futures Race.

Ladouceur lead most of the 12-lap event but got passed at the checkered flag and was beaten by .006 second. After the winner’s car got disqualified during the post-race inspection, Ladouceur moved up to first place, winning the race.

Ladouceur said he felt pretty good after winning the race, particularly given that just 12 hours before the race his car had been involved in a crash.

“To come out here tonight and win a race is a pretty good feeling,” said Ladouceur in the winner’s circle.

The last Northeast DIRTcar event of the season will be held this coming weekend at the Fall Nationals, which will be held at the Brockville Speedway.