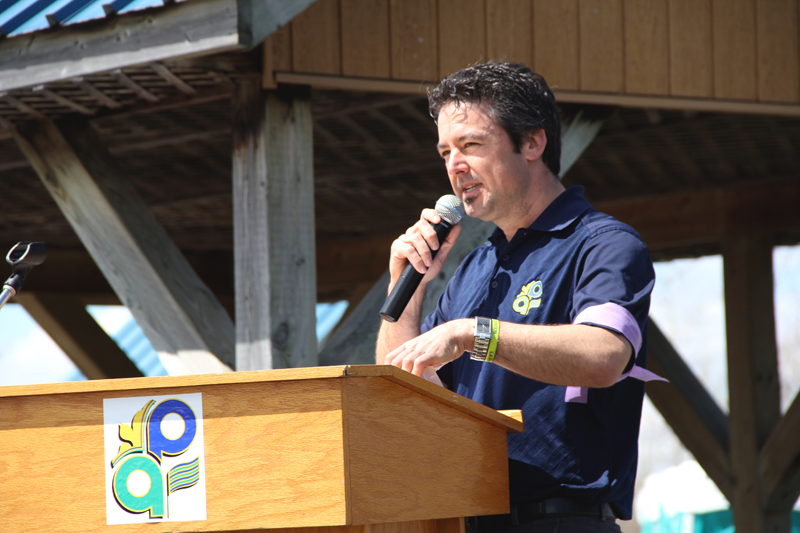 Alfred-Plantagenet Township Recreation Director Ken St-Denis is leading a project to build a new interior sports complex in the township. St-Denis is seen here at the Healthy Kids Community Challenge, which was held on the Prescott-Russell Recreational Trail earlier this year. Photo: Tara Kirkpatrick

Alfred-Plantagenet Township is researching the idea of building a sports dome. If funding and community support come together, they say that the $1.5 million project could be completed within the next three years.

Last January, Alfred-Plantagenet Township Recreation Director Ken St-Denis submitted a report to council recommending that they consider investing in the construction of a new dome.

Council favoured the idea, which is still in the early stages of planning. The first steps involve determining what type of facility to build. Then they need to figure out how to pay for it.

“The type of infrastructure we are most interested in is a dome or a sports complex. We are not looking at building an arena, because they are limiting in allowing for the use of other sports. We also want something that can be used year-round,” said St-Denis.

Designing options remain in the preliminary stages, but St-Denis said that they are looking for a construction plan that includes a walking/running track around the exterior of the field, which could be used for soccer, football, volleyball and other sports.

The Tim Horton’s Sports Dome in Alexandria is being used as a possible model. St-Denis has visited the site on a number of occasions and he said a similar structure would meet the needs of Alfred-Plantagenet’s population, which he said is similar in size and requirements to that of Alexandria. The Tim Horton’s Sports Dome was erected in 2010 and cost roughly $1.2 million to build. It was funded by the federal and provincial governments, North Glengarry Township and a considerable amount of local and corporate fundraising.

Alfred-Plantagenet Township is looking for partners to assist with the planning and financing of its own sporting facility and St-Denis said that extensive fundraising will be needed to get the project off the ground.
In August, Alfred-Plantagenet Township council voted on a resolution to apply a special tax to all new building permits, which will be used to specifically support the construction of a new sports complex.

In May, the Conseil scolaire de district catholique de l’Est ontarien (CSDCEO) school board sent a letter of support to Alfred-Plantagent Township, confirming its interest in partnering to construct a multipurpose sports complex in Plantagenet. The proposed site is located adjacent to the École catholique secondaire de Plantagenet high school, which is located along County Road 17.

“This would be an excellent location for a sports complex. It’s located in the centre of the township and would be ideal for both parties. It would help the school to be more competitive, allowing them to improve their sports programs. We think it would help them to increase enrollment in the high school, which currently has around 400 students,” said St-Denis.

The high school would be able to use the new sports facility for physical education classes and for extracurricular sports. Two elementary schools are also located in close proximity to the proposed site.

Soccer PRO17 is also exploring the possibility of a partnership. The soccer league was founded nearly eight years ago and serves residents in Alfred-Plantagenet and Hawkesbury. The league is growing every year and currently has more than 600 members. There is one adult team and close to 25 children’s teams in Alfred-Plantagenet, with an additional 20 teams in Hawkesbury. Soccer PRO17 is a house league, which focuses on fun. Most of the players are between the ages of four and 17, with three competitive teams that play in the Eastern Regional Soccer League. The league is currently hosting most of its home games on the soccer field located behind the Plantagenet High School and in the park behind Alfred College.

Soccer PRO17 Vice-President Christine Gascon told The Review that a new dome would make a huge difference in the competitiveness of the league and its ability to expand.

“Right now, we run the league from May to August. At the beginning of the season we need to wait for the fields to dry out and we rent gyms to host our trials in,” said Gascon. With an interior sports centre, she said the league could play year-round.

“There’s not only soccer that would benefit. I’m from the region and I would like to have a place to go where I could go running, play tennis and sign up for other classes. It would provide a place for our elderly to walk and for young moms and babies to gather,” said Gascon.

St-Denis agrees that there is a need to provide a space for all generations to gather and to participate in sports that are geared to different abilities and interests. He also thinks that the new sports complex would serve an important role in uniting the eight municipalities that make up the township, which was amalgamated nearly 20 years ago.

“We want everyone in the township to feel that this facility is part of their heritage and their shared community,” said St-Denis.

A new recreation committee has been launched by the township to provide planning recommendations for the new sports facility. The committee is open to all residents. In addition to providing suggestions for the sports complex, this committee will be tasked with planning for the Canada 150th Anniversary celebrations slated to take place next year. The next meeting of the Alfred-Plantagenet Recreation committee will be held at the Plantagenet Hall, which is located at 220 Main Street, in Plantagenet. It will take place on Thursday, September 22, at 7 p.m., and will include an overview of the sports dome proposal and an election of a new board of directors.

“Everyone has the right to join the committee. It is not closed and we want to hear from everyone,” said St-Denis.