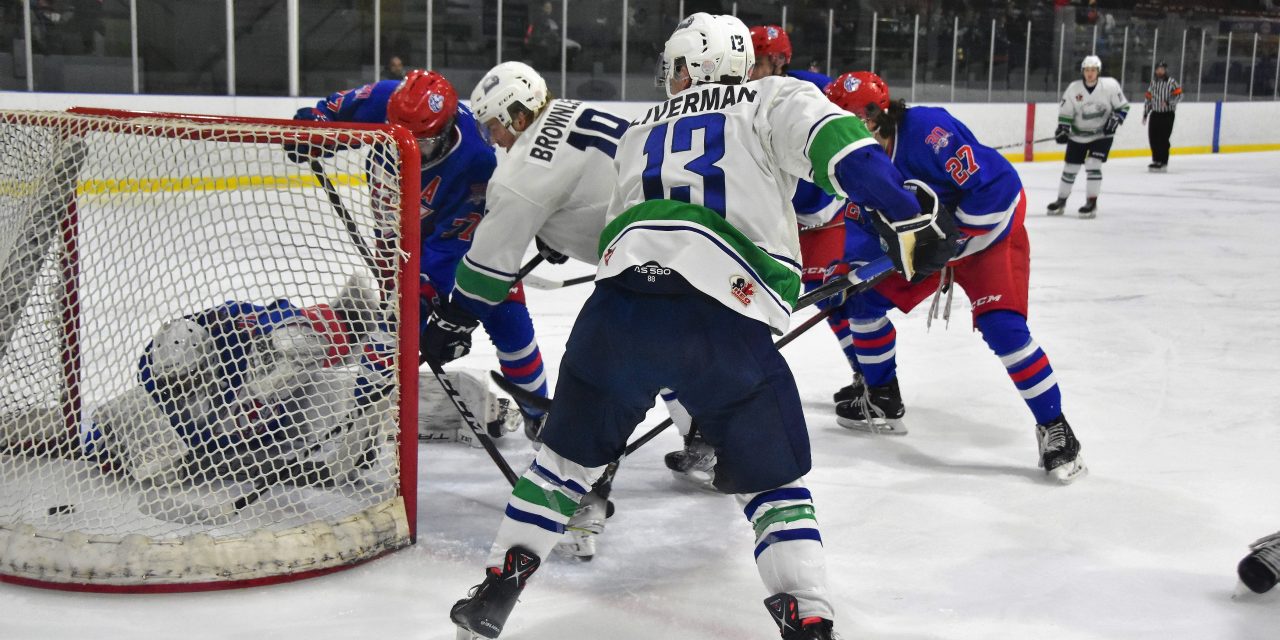 Hawks forward Landon Brownlee (19) jams home one of his two goals in the Hawks 4-3 shootout win over the Cornwall Colts on Friday, January 20. Ryan Liverman (13) also had a goal in the contest. Photo: Sylvain Lauwers

The Hawkesbury Hawks won their fifth straight game, with Jakson Kirk scoring twice in a 4-2 road victory over the Carleton Place Canadians on Sunday afternoon (January 22).

Sunday’s win in Carleton Place followed an exciting 4-3 shootout win over the Cornwall Colts on Friday night (January 30) at the Robert Hartley Sports Complex in Hawkesbury. Landon Brownlee was the hero on Friday night, scoring twice and adding the shootout winner.

“I’m liking the buy in by the players,” said a pleased Hawkesbury Hawks General Manager Marc Bernique, who took over the coaching reins of the team two months ago.

The Hawks coaching staff made some changes for the weekend games, moving Brownlee and Kirk to separate lines to balance out the team’s scoring. The move obviously paid off.

“I think the guys are gelling and the mood is good in the room,” Bernique said. “We’re showing the players different systems and we’re going to slowly add more. Hopefully we peak at the right time.”

With the two victories, Hawkesbury (20-11-3-3) extended its winning streak to five games and closed to within just five points of the Navan Grads in the race for second place in the Central Canada Junior Hockey League’s (CCHL) Yzerman Division.

Hawkesbury is at home this Friday evening for the first game of a weekend home-and-home series with the Pembroke Lumber Kings (8-23-2-1). Game time at The Bob is 7:30 p.m. On Sunday, the Hawks travel to Pembroke for a 7 p.m. rematch with the Lumber Kings.

Kirk scored the winning goal and added an empty net insurance marker to help lead the Hawks to a 4-2 road win over Carleton Place (21-12-0-2) on Sunday (January 22).

Brownlee opened the scoring in the first period with his 20th goal of the season, while Aiden Stubbings scored his fifth of the year to stake the Hawks to a 2-1 lead after two periods. Kirk earned the game’s first star for his efforts, while Antoine Dorion, with two assists, was the second star.

Brownlee scored twice and added the shootout winner, as the Hawks earned a hard-fought shootout win over Cornwall on Friday, January 20.

Ryan Liverman added a single goal, while Dimitri Pelekos made a whopping 52 saves, as Hawkesbury improved its season record to 19-11-3-3. Cornwall, which fell to a record of 15-18-1-1, had goals from Brayden Bowen, Nolan Gagnon, and Nathan Garnier. Cameron Hollands made 48 saves in the losing effort.