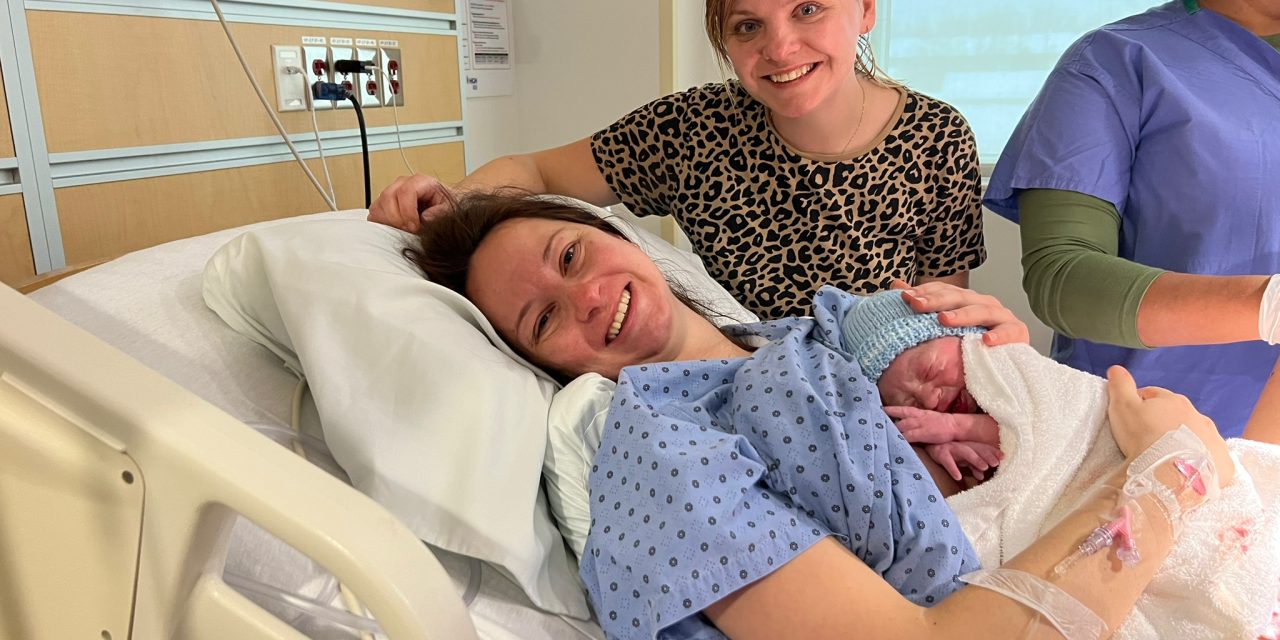 Damian Sorokin was born at Hawkesbury and District General Hospital at 9:09 a.m. on Tuesday, January 17. His mother is Maryna Sorokina who moved to Lachute in December. Also shown here with Damian and Maryna is Séminaire du Sacré-Cœur International Coordinator Anastasiia Lavrynets, who has been assisting Maryna with language translation during the pregnancy. Maryna’s husband and Damian’s father Yuriy Sorokin is still waiting in Odesa Ukraine for permission to join them in Canada. Submitted photo

Maryna Sorokina is not the only person waiting for her husband Yuriy to receive approval to join her in Canada.

The Ukrainian woman, who is living in Lachute, delivered a baby boy one month early. On Tuesday, January 17, at 9:09 a.m., Damian Sorokin was born at Hawkesbury and District General Hospital. Both Damian and Maryna are in good health.

Mother and child are now waiting on approval from the Canadian government to allow Damian to meet his father and Maryna to be with her husband again.

In the January 11 edition of The Review, we featured the situation facing the couple from Odesa, Ukraine, where life has been incredibly difficult since the invasion and resulting war with Russia began nearly one year ago. Joel Hay of Lachute met Yuriy and Maryna through international work his Morin Heights-based company TISEC was doing in Ukraine and is sponsoring the couple. Maryna relocated to Canada in mid-December and is living at the Médaillon d’or residence in Lachute. However, Yuriy’s application to move to Canada has faced a long delay and he remains waiting in Odesa.

According to Hay, Yuriy’s visa application status recently disappeared from Immigration and Refugees Canada’s (IRCC) web portal, which led him to panic. However, Yuriy made a very long-distance phone call to Ottawa from Odesa and was able to speak to an IRCC employee, who explained there had been a technical problem on the IRCC website and his application had not been lost. Efforts to expedite the approval of Yuriy’s application so he may join Maryna and his new son in Lachute continue, but with difficulty.

Hay has repeatedly contacted Argenteuil-La Petite-Nation Member of Parliament Stéphane Lauzon’s office for assistance but he said their “hands are tied.”

Meanwhile, Hay is seeking broader attention for Yuriy’s situation. Thursday, January 19, it was featured on the Andrew Carter Morning Show on CJAD 800 AM from Montréal.