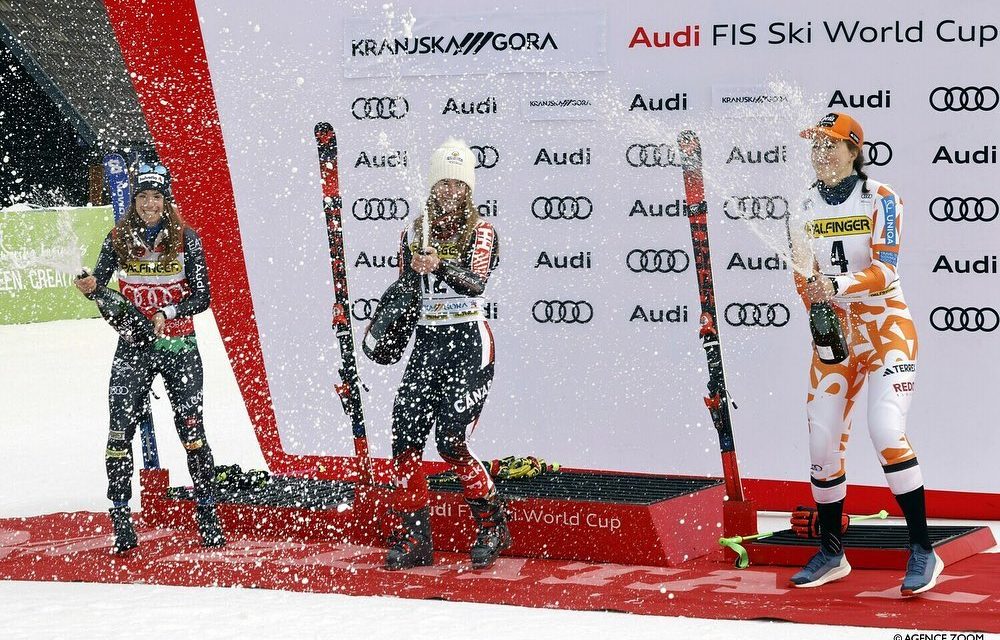 Valérie Grenier (centre) got to enjoy the celebration after her historic Giant Slalom win, but she couldn’t enjoy the champagne because there was a second race in Slovenia the foillowing day. Photo: Agence Zoom

Valérie Grenier was still in disbelief three days after she became the first Canadian woman to win a World Cup Giant Slalom race in almost 50 years.

Believe it she can. Grenier raced to the top of the podium, winning the gold medal in last Saturday’s (January 7) FIS Alpine Skiing Women’s World Cup Giant Slalom (GS) at Kranjska Gora, Slovenia. The local racer, who was raised in St-Isidore and now lives in L’Orignal, won both runs of the event, taking the overall win by .37 of a second.

Grenier made history with the win, earning Canada’s first women’s World Cup podium in giant slalom since 2006 and first World Cup GS win since Kathy Kreiner stood on top of the podium for Canada in 1974. In her 90th World Cup start, this the 26-year-old’s first podium and it did not take long for the interview requests to start pouring in.

A flood of media requests

“It’s been pretty overwhelming,” said Grenier of the attention she has received since the win. “I’m just trying to make time for everybody.”

As she crossed the finish line for Saturday’s second run, Grenier said she glanced at the scoreboard and just saw a large 1, indicating she had won. She was still trying to process the information when her teammates, Cassidy Gray (Invermere, BC), Sarah Bennett (Stoneham, QC) and Britt Richardson (Canmore, AB) ran up to embrace her.

“I think it’s my favorite moment ever. I crossed the finish line, saw I was first and couldn’t believe it – I had so many emotions,” Grenier recalled. “And then I saw the girls just run over and jump on me. That’s when it felt really real. I was so grateful that my teammates were there to celebrate with me.”

But the celebration was short. With a second GS event scheduled on Sunday (January 8) at Kranjska Gora, Grenier actually had a shot at winning twice on the weekend. She was third after Sunday’s first run, but a late mistake in the second run dropped her to sixth overall – still an outstanding performance.

“I was a bit all over the place,” Grenier said of her second run on Sunday. “Still, finishing sixth is a great result.”

The back-to-back races in Slovenia meant for a muted celebration on Saturday evening after Grenier’s win.

“We just took a moment for the whole team to sit down and have a small celebration,” Grenier said. “After that it was back to work. I did my prerace for the next day, and I had a lot of interviews. It was pretty overwhelming, because I felt like I really didn’t have much time. But that’s okay, it’s a part of the game.”

A boost of confidence

Grenier was scheduled to travel with the Canadian women’s alpine ski team to St. Anton, Austria, on Wednesday (January 11) where she will race in the Women’s World Cup Super G on January 15.

Grenier said last weekend’s victory in Slovenia has boosted her confidence and she is aiming for more top results in 2023.

“I think confidence is a really important part of ski racing,” Grenier observed. “If you feel confident and you trust yourself it makes a huge difference to how fast you can go.”

“I think it’s really going to help me for the next races, because I know I can trust myself and my skiing. I don’t have to do anything special, I just have to do my thing. I know I’m skiing fast and it’s exciting.”

In the meantime the local racer is still busy answering text messages and emails from well-wishers from back home.

“It’s amazing. I feel so loved. I hope everyone knows that I’ve seen the messages and I’m trying to answer every single one of them.”