Ukrainian couple waiting to be reunited in Lachute 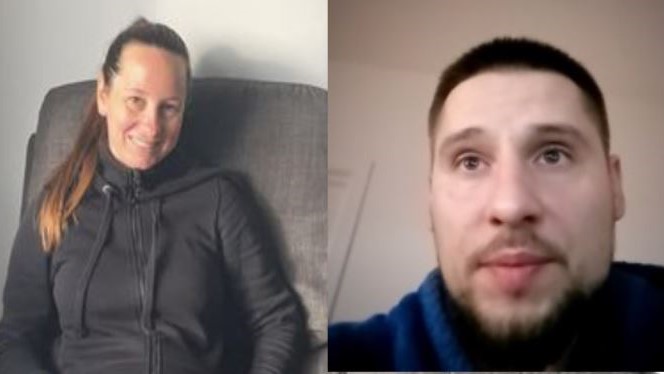 Together, again–for the birth of their first child. That what Maryna Sorokina and her husband Yuriy Sorokin are hoping for. The couple is from Odesa Ukraine, where an invasion and war with Russia has now been going on for nearly a year. Maryna is due to give birth in February. She has safely resettled in Lachute, but Yuriy is still in Odesa, awaiting approval by Canadian immigration authorities to come to Canada.

The couple’s resettlement in Canada is being sponsored by Joel Hay of Lachute and his Morin Heights-based company, TISEC. The company has clients all over the world, and it was through work with Ukrainian company Cryoin that Hay was connected with Maryna and Yuriy.

“In September 2022, I received an urgent message from my colleague Yuriy from Cryoin in Odesa to see if I could help him and his pregnant wife come to Canada,” Hay recalls. “I told him that he had our full support and I offered him work with our company,”

Maryna arrived in Canada in mid-December and was given an apartment at the Médaillon d’Or residence in Lachute, rent-free for one year. She is the youngest resident at a building normally reserved for retired people.

With the help of the Municipalité régionale de comté (MRC) d’Argenteuil, Hay was put in contact with Le Coffret in St-Jérôme and Séminaire du Sacré-Cœur in Grenville-sur-la-Rouge. Both facilities are assisting Ukrainians relocating across the Laurentides region of Québec.

Just two days after Maryna’s arrival, Séminaire du Sacré-Cœur International Coordinator Anastasiia Lavrynets, who speaks Ukrainian was able to set up various support services, including a doctor to oversee Maryna’s care and the delivery of her baby. Lavrynets is also providing translation of all medical correspondence for Maryna. Hay also appealed on social media for baby items and received an overwhelming response from across Argenteuil. Lydia Dupuis of Lachute volunteered to help set up Maryna’s new apartment.

Maryna is enjoying her new home in Lachute and appreciates having a safe and quiet place to live. Her English and French is limited, but she tries her best to chat with her neighbours.

“People are friendly there,” she says.

However, Maryna did say the circumstances are unusual.

“It’s unusual for me, not only for me, but for my baby,” she commented.

“I hope Yuriy arrives in Canada soon and we will be together,” added Maryna.

Both Maryna and Yuriy are 35 years old. The baby is due on February 12. Maryna previously worked in project management in Ukraine and hopes to eventually return to that profession in Canada. Yuriy works in logistics and has already been offered a position with Hay’s company once he is able to travel to Canada.

Yuriy and Maryna both applied to move to Canada in early September of 2022. Maryna’s biometric test was approved nearly immediately, which allowed her to apply for a visa, which was quickly granted so she could move to Canada. However, Yuriy’s application has taken much longer. He routinely, and anxiously checks online for progress with his application. Whenever the approval is granted, Yuriy will then have to apply for a visa through Canadian embassy in Vienna Austria, which will take another seven to 10 days. He is hoping it takes a maximum of two weeks from the time his application is approved until the visa is granted, and travel arranged so he can travel to Canada.

“I am hoping I will get a visa before the baby’s birth,” Yuriy told The Review on a Zoom link from Odesa.

“There is no certain date when I should receive this approval,” Yuriy commented. However, he did say statistics indicate he should receive a reply before the end of January.

If Yuriy is unable to be in Canada by the time the baby is born, Lavrynets will accompany Maryna at the hospital.

Hay contacted Argenteuil-La Petite-Nation Member of Parliament Stéphane Lauzon’s office and staff there provided paperwork for Yuriy, Maryna, and Hay to complete, with the hope it could expedite Yuriy’s application.

While Yuriy waits in Odesa, he continues to go about his daily life the best he can. He said working in logistics has become more difficult due to the ongoing war.

“Everything became more slow,” he said.

“Some countries don’t want to send any goods to Ukraine,” he added.

Yuriy explained many foreign delivery companies, such as Germany-based DHL, have stopped shipping to Ukraine. Instead, Ukrainian companies have had to reach supplementary contracts with those companies so goods can be delivered.

Nightly curfew due to Russian attacks

According to Yuriy, life in Odesa changes from night to day as far as safety hazards and the threat of Russian attack go.

“During the day, it is no problem in Odesa,” he said.

However, there is a nightly curfew where only police and military are allowed to be out in public because there is greater risk of Russian attack.

Yuriy is a Russian citizen, but he has lived and worked in Ukraine for 18 years. He said the couple chose to stay in Ukraine at their home as long as they felt safe there.

“It is always better to live in your own flat and in your own home than to be a refugee,” he said.

Yuriy said prior to the Russian invasion and war, Ukrainians and most Russians in the country got along well with each other.

The MRC d’Argenteuil has been part of an effort to help with Ukrainian resettlement across the region. According to Economic Development Commissioner Marie-France Larose, they have received several inquiries about assisting Ukrainians in recent months. However, an exact number of people assisted was not available. According to Lavrynets, at Séminaire du Sacré-Cœur, 12 other people from Ukraine, who are planning to resettle in Argenteuil, are currently living in the student residence at the seminaire or with local host families.