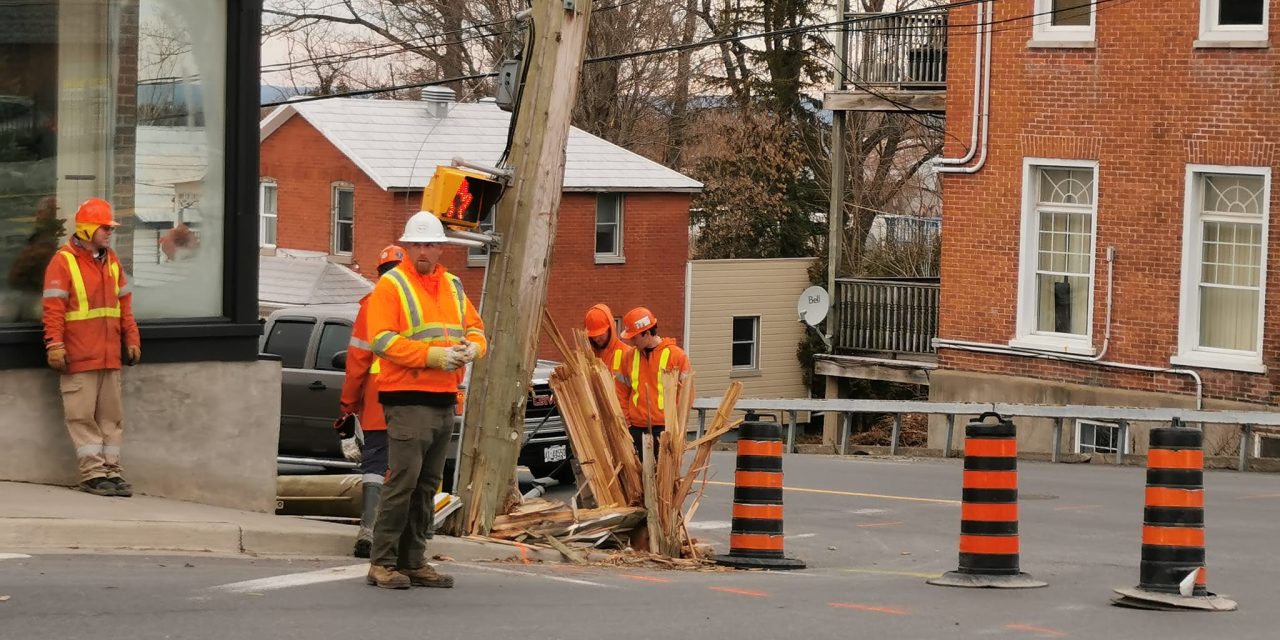 On December 5, 2022, a large northbound vehicle on High Street in Vankleek Hill made a left turn to go west on County Road 10 and struck the large, wooden pole holding power lines and traffic lights at the southwest corner of the intersection. The severed pole dropped down and landed immediately next to the stump which remained in the ground. Review file photo

Utility poles at Vankleek Hill’s busiest intersection took a beating during the past year. However, it is uncertain if changes will be made to improve safety at the corner of Main Street (County Road 10) and High Street (Highway 34).

In 2022, there were three collisions between trucks and utility poles at the intersection. The first one was on July 29, when a cement mixer truck struck and toppled the traffic light pole on the northeast corner beside the fire hall entrance. A temporary traffic light pole was installed, but exactly two months later on September 29, the new pole was felled by another truck. A new, permanent pole has since been installed, with new concrete on the ground surrounding it.

On December 5, 2022, a large vehicle struck the large, wooden pole which supports power lines and traffic lights at the southwest corner of the intersection. The severed pole dropped down and landed immediately next to the stump, which remained in the ground.

In addition to the three mishaps between trucks and poles, the wooden utility pole at the northwest corner of the intersection bears severe scrape marks. Chunks of wood are missing, steel covering for utility cables connecting the pole to underground lines is dented and twisted, and there are significant scrape marks on the pedestrian crosswalk control button.

The intersection predates the days of the automobile, let alone the tractor-trailer. The crossroads has existed since the early days of local settlement. Overhead power lines and traffic lights were unheard of in the early days of Vankleek Hill.

More than just roads meet in the centre of Vankleek Hill. It is an intersection of bureaucracy. It is where two municipal streets of Champlain Township, Highway 34 of the Ministry of Transportation of Ontario (MTO), and County Road 10 of the United Counties of Prescott and Russell (UCPR) meet. Add on Hydro One – which owns the wooden poles and power lines – and Bell Canada, whose telephone lines are carried on one of the poles.

“This intersection is under the jurisdiction of the UCPR and the MTO, so it would be more their responsibility to redesign this intersection,” said Champlain Township Communication and Economic Development Specialist, Zoé Fortin-Larocque.

She added that Champlain Township did contact Hydro One to see if the pole damaged on December 5 could be relocated, but the power company said it was impossible due to the proximity of the building located on the same corner.

According to Hydro One Senior Media Relations Advisor Tiziana Baccega Rosa, the utility is looking at ways to minimize future damage.

“We are looking at options to reduce damage to the local distribution system and prevent outages,” Baccega Rosa said.

UCPR Director of Public Works Jérémie Bouchard described the collision between the cement truck and the traffic light pole on July 29, 2022, as a “one off”, not influenced by the geometry (design) of the intersection.

“I’ve looked at the intersection myself,” Bouchard said.

However, he does want a guard rail reinstalled around the pole. The previous one was destroyed in the collision. As for the hydro pole on the southeast corner where the December 5 collision occurred, Bouchard is hopeful a change may be made there eventually.

“That hydro pole is kind of in the way also,” he commented.

The UCPR will work with its traffic consulting firm and Hydro One on a possible solution. But Bouchard said any changes are unlikely to be made in the next few months.

He further explained how the stop lines at the intersection are already placed in a way which allows large vehicles to have the space to safely turn.

The Review contacted the MTO with questions about the design of the High Street/Highway 34 and Main Street/County Road 10 intersection in Vankleek Hill but did not receive a response by publication time. Inquiries were also made with the MTO and the Ontario Trucking Association about truck driver training and safety, but no response was received from either organization.