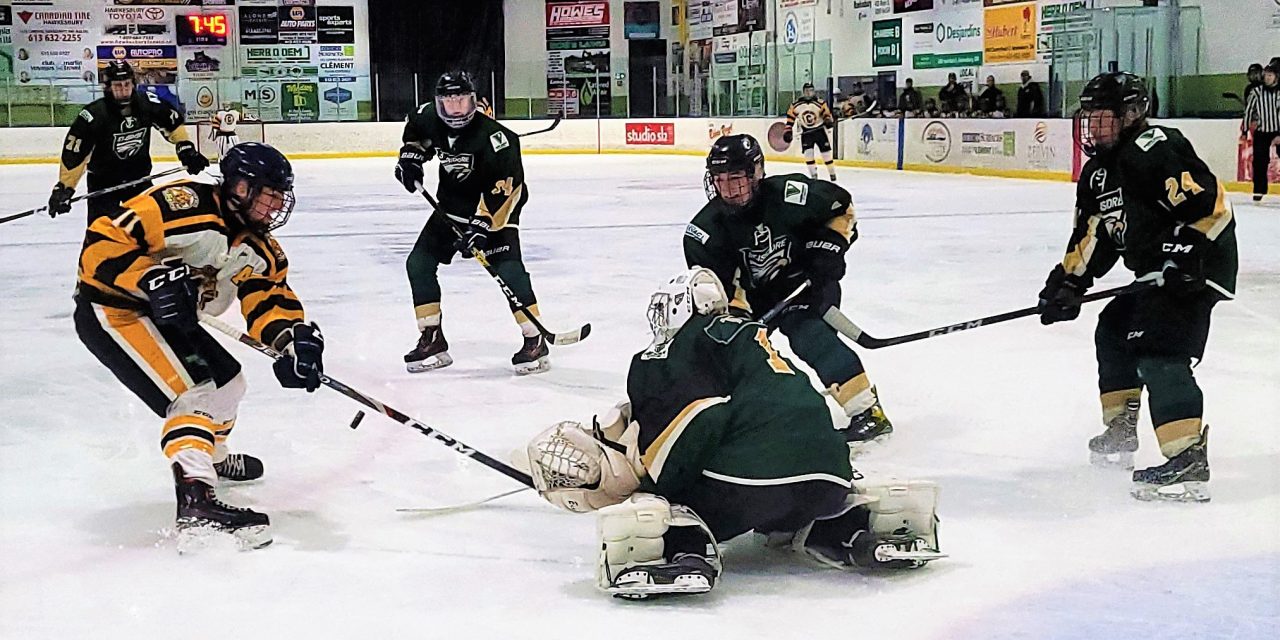 The Eagles got goals from Olivier Chagnon, Colin Leclerc and Tyler McBain in the win at the Robert Hartley Sports Complex in Hawkesbury. Alexandre Saul scored both goals for Vankleek Hill. Tristan Trudel was outstanding in the St-Isidore net, stopping 53 of 55 Cougars shots. Vankleek Hill’s Frederick Duroucher-Bourdon also played well, turning away 33 of 36 shots.

St-Isidore picked up another point on Sunday (December 11) at the National Capital Hockey League (NCJHL) Showcase in Westport, tying the Metcalfe Jets 3-3.

Vankleek Hill faced the 15-3-1-0 South Grenville Rangers at Sunday’s showcase with a shorthanded squad. The Cougars put up a strong effort against the league’s top team, but ultimately lost 4-2. Josh Desjardins scored both goals for Vankleek Hill, while Duroucher-Bourdon stopped 36 of the 39 shots he faced – the final goal being scored into an empty net.

“We had a really solid game,” said Cougars Head Coach Franky Dopelhamer of the effort put forward by his team, which was missing several players due to school exams and the travel distance on Sunday.

With the weekend’s results, the 12-6-1-0 Eagles moved three points ahead of the Cougars (10-6-0-2) to strengthen their hold on fifth place in the NCJHL. While he was hoping for better results on the weekend, Dopelhamer said the Cougars played well in both contests.

“Games like this weekend, even though we only got one point out of four, we are happy with the way we played,” the Cougars head coach said. “Did we try? Did we have chances, but just couldn’t put the puck in the net? The answer is yes.”

The Cougars will have have another tough test when they face the fourth place Clarence Castors (14-6-0-0) in Clarence Creek this Saturday, December 17. Game time is 8:30 p.m.