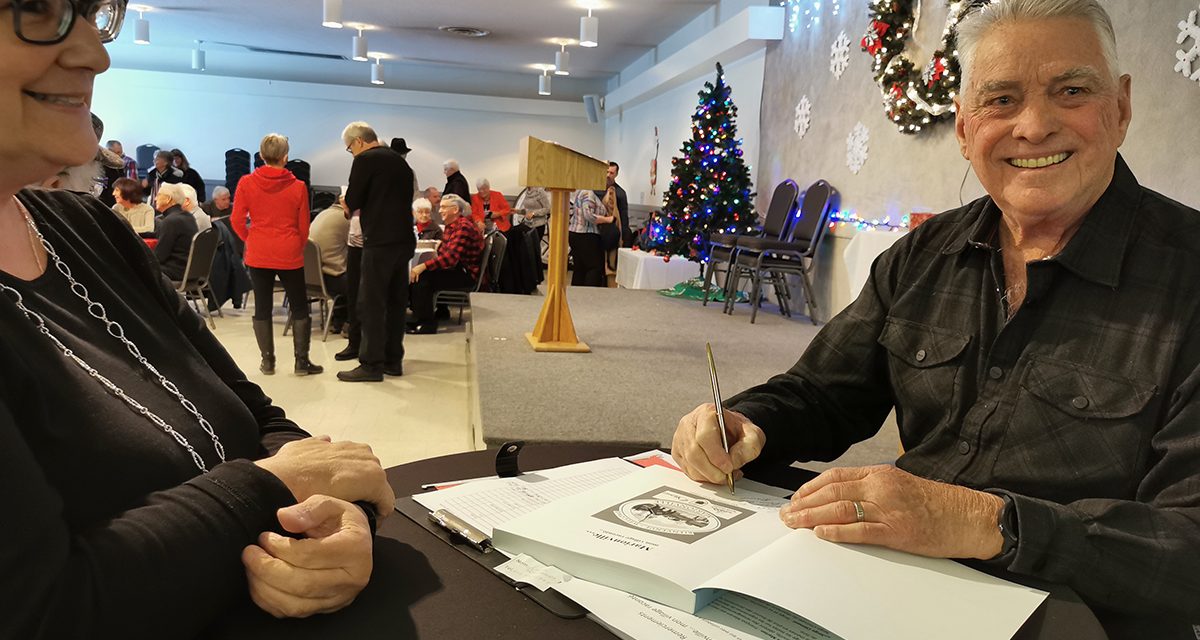 Author Marcel Clément (at right) autographed many of the 150 books that were pre-sold, telling the history of Marionville. A book launch took place Sunday afternoon at the Marionville Community Centre. Photo: Louise Sproule

But a new 300-page book, penned over the past two and half years, will also help people remember Marionville.

Author Marcel Clément, was born in Marionville in 1944 and is a direct descendant of one of the founders of Marionville. Although he now calls L’Orignal home, he visits his hometown regularly and has stayed in touch with friends over the years. He says the book began when he started making a list of the people he remembered from his years of growing up in Marionville.

Clément says he journeyed back in time and mentally visited the homes along the roads leading to Marionville. “I started making a list of the family names and the maiden names of wives to trace out who used to live there,” Clément explained, adding that in the end, he had come up with 350 families, after asking some friends for help with the names he could not remember.

Marionville was named after the Marion family, who had settled in the area and although they travelled to Embrun for a while to attend church, eventually worked with others in the community to bring about the building of a church in Marionville around 1904.

Clément’s book is a focus on the people and a way of life that for the most part–is gone.

“How did we live after the war, around the time that we were starting to have cars, but there were still horses doing the work?” Clément reflected.

From the families, Clément says that key areas of the community emerged, including sports, rural life, the three schools that existed there at one time, and how the seasons marked life in the community.

“One thing kind of led to another,” he explains. As he set to work to organize the book in themed chapters, he used social media to put the call out for family photos or other community photos. People came forward with dozens of photos and in the end, about 300 photos or images are contained in the book.

At the book launch at the Marionville Community Centre on Sunday, December 11, more than 100 people were present with several tables reserved for specific families. Clément says he recognized almost everyone, including people he had not seen for 50 years.

Clément says the rural countryside is changing, as development in the form of subdivisions is happening.

“When I was young, it took us a long time to get to downtown Ottawa. But now, Boundary Road takes you to the 417 and you can be downtown in 30 minutes,” he explained.

While the primarily English population became more francophone in the early part of the 19th century, he says that new residents are changing the balance yet again.

With three municipalities governing the small community, the need for a citizens committee emerged, Clément continued.

“It was felt that citizens needed to get organized to understand where to go when support was needed,” Clément said.

It is still a close-knit community and the Marionville Citizens Committee has done a lot of work, Clément said, including the recent installation of a historical plaque. “We have a beautiful park, a hockey rink, a beautiful ball diamond and we have a nice hall–we are fortunate,” he said, adding that it is not quite the community that he knew. “There used to be a store here, a cheese factory, a garage and gas station . . . . but that is all gone.”

‘Marionville . . . mon village raconté’ sold out its first 150-book print run. But a second round of books will be available to those who order by December 19. Delivery is expected in mid-January 2023. Anyone interested in ordering and pre-paying for a copy (books cost $40 per soft-cover copy) can contact Marcel Clément by calling 613-675-1841. Clément can also be reached by email: [email protected]