New council in La Nation gets to work at first meeting 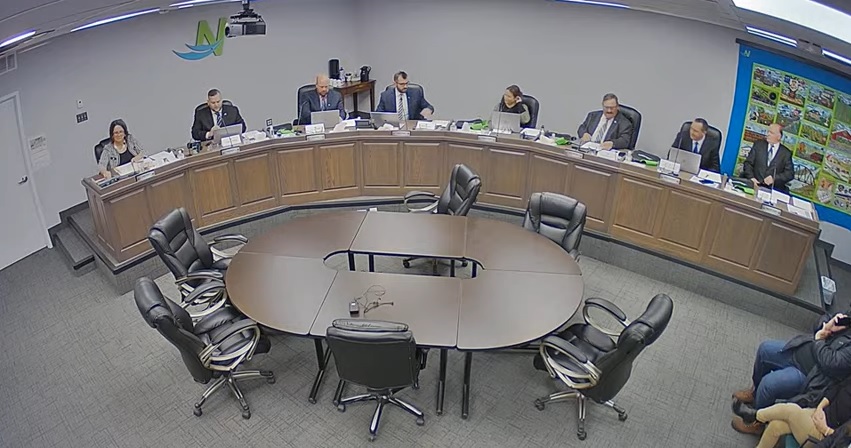 The new La Nation municipal council got to work right away on Monday, November 21, 2022, with a short inaugural portion of the regular council meeting held at the municipal building near Casselman.

Mayor Francis Brière was the first to make his declaration of office and oath of allegiance to The King, which was presided over by Clerk/Chief Administrative Officer Josée Brizard.

Wards 5 and 6 in the western part of La Nation are new and were created before the October 24 municipal election. Forgues and Mainville were re-elected. Brière formerly represented Ward 4 as a councillor.

Brière made few remarks after being sworn in, and councillors made no remarks at all.

“Welcome everybody to the first meeting of our new council and our new team. Let’s get this thing going,” Brière said as he took his seat.

Council got right down to business.

Knebel told council that operating and capital budget reports identifying priority projects have already been received from the heads of each department.

The municipality will be advertising its budget preparation process in local newspapers and on social media during the final week of November. Written requests from citizens regarding the budget will be accepted until December 23. The first draft of the 2023 budget will be presented to council on January 16 and 17 and the date for the final draft will be determined at that time.

The motion to receive Knebel’s budget report was moved by Boisvenue, seconded by Drolet, and carried by council.

When the new council adopted its schedule of meetings for 2023, Brière noted there are initially meetings on consecutive weeks, rather than the usual twice per month. He said more meetings are necessary because there are new councillors who need the extra sessions to become better informed.

“We’re going to have many meetings at the beginning, but then it will slow down as it progresses,” Brière said.

La Nation is transferring the ownership and operation of the electronic community message sign in Limoges to the Limoges Firefighters Association. Brière said he wants to be sure the association has a good of reserve funds available for any maintenance the sign requires. He proposed using about $3,000 remaining in his discretionary fund from when he formerly served as Ward 4 Councillor. The motion to approve the contribution of the funds to the firefighter’s association was moved by Mainville and seconded by Drolet before being approved.

There are two Christmas parades coming up in La Nation. The Limoges Firefighters Association and Limoges Optimist Club Christmas Parade is on December 3 at 6:30 p.m.

The Groupe Communautaire de St-Albert is organizing that village’s Christmas Parade for 3:30 p.m. on December 9.

La Nation council has approved the route for each parade.

“I can almost promise you, that’s the easiest one,” Brière joked to the new councillors after they voted to adjourn.