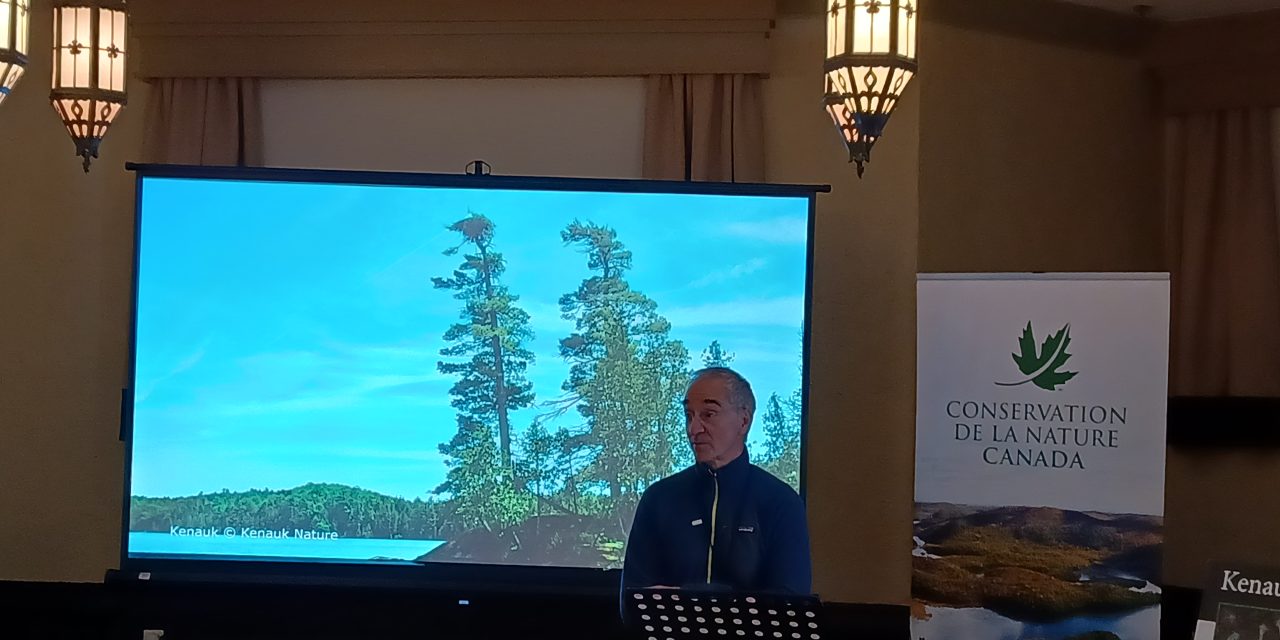 Patrick Pichette, one of the four Kenauk Institute founders and property owners, at the announcement in Montebello on November 16 of a partnership and fundraising effort to protect the territory under a partnership with the Nature Conservancy of Canada. Pichette is also an Associate of Inovia Capital and former CFO of Google. Photo: James Morgan

A plan is in place to ensure a large area of forest and lakes north of Montebello will be preserved forever.

On Wednesday, November 16, the Nature Conservancy of Canada (NCC) and Kenauk Institute (KI) announced a plan to conserve Kenauk: 25,000 hectares in the Outaouais region that harbours exceptional biodiversity, including rare and endangered plant and animal species.

The announcement was made amid the rustic elegance of the Fairmont Chateau Montebello resort. The Kenauk lands were originally part of the resort many years ago.

This partnership between the NCC and KI is intended to establish a permanent open-air laboratory in a temperate forest in Québec, dedicated studying climate change and educating future generations. The Université du Québec a l’Outaouais (UQO), Montréal-based environmental organization Age of Union Alliance, and Inova Capital are the other partners.

The NCC and KI and other partners have launched a $20 million fundraising campaign to complete the project. To kick-start the campaign, $30 million in funding support and land donations has already been raised.

The families of Doug Harpur, Dominic Monaco, Patrick Pichette and Mike Wilson — co-founders of KI — donated half of their lakeside properties to NCC to create a protected area with the 645-hectare tract of land. Pichette is an Associate of Inovia Capital and the former Chief Financial Officer of Google. The four property owners have pledged to donate the other half of their land to protect the territory in perpetuity.

The donation of 645 hectares was completed as part of NCC’s Projet de partenariat pour les milieux naturels, for which the Government of Québec provided $1 million and by the Government of Canada through the $1,010,000 Natural Heritage Conservation Program – part of Canada’s Nature Fund.

“We’re going to help the next generation,” Pichette said.

The United States Fish and Wildlife Service has also contributed $100,000 because of the importance of the Kenauk lands as a site for migratory birds whose habitat also includes the United States.

Kenauk’s old-growth forests and wetlands house exceptional biodiversity, including rare and at-risk plant and animal species, such as black maple – designated as a vulnerable plant species under the Québec Act Respecting Threatened or Vulnerable Species – and eastern wood-pewee – designated as a species of special concern under Canada’s Species at Risk Act (SARA). Kenauk’s Lac Papineau is the source of the Rivière au Saumon.

Jessica Turgeon served as a Senior Intern at the Kenauk Institute in 2016 while doing research for her master’s thesis on beetle and spider communities. She made significant discoveries while doing her work in the area.

“Some of the species had never been found before, in the region,” she said.

Other, completely new species were found for the first time.

“Nature conservation is more important than ever,” Ducharme stressed.