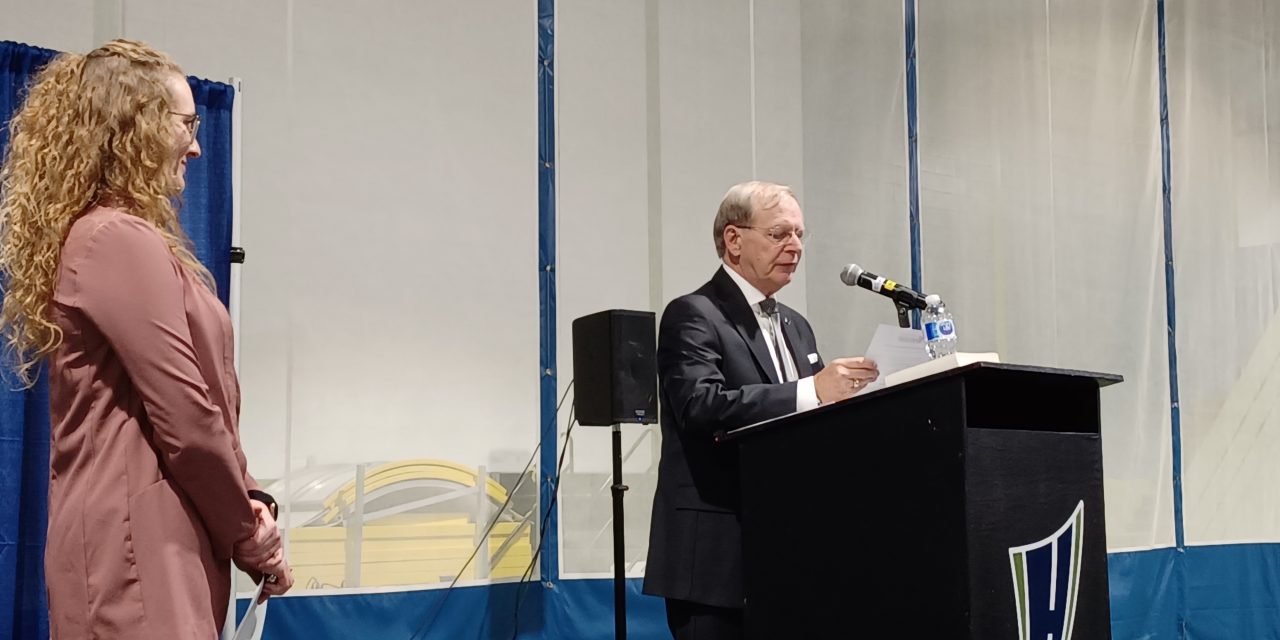 Hawkesbury Town Clerk Myriam Longtin looks on as Mayor Robert Lefebvre recites the declaration of office and oath of allegiance at the inaugural meeting on November 18. Photo: James Morgan

Mayor Robert Lefebvre and each councillor made their declaration of office, oath of allegiance to King Charles III, and signed the town’s Golden Book, before an audience of family, friends, and supportive citizens. The municipal election was held on October 24. Lefebvre was presented with the official chain of office by his wife Johanne Portelance, who is also a former councillor.

“My theme is communication, cooperation, and collaboration. Without these tools, we cannot be successful,” Lefebvre said in his inaugural remarks.

He added how the support of municipal staff and community volunteers will help make council’s decisions successful. Lefebvre described leadership as something where people work together to achieve results.

“I am truly humbled with the great honour the residents of Hawkesbury have bestowed on me by becoming their mayor,” said Lefebvre. He promised to serve all citizens of Hawkesbury.

“I will always attempt to earn your trust and respect,” Lefebvre said.

Councillor Jeanne Charlebois received the highest number of votes in the municipal election and as a result, will act as deputy mayor. Charlebois had served two terms as mayor before being defeated in 2018.

She was optimistic about the new council’s ability to get things done.

“I have confidence we will cooperate for the next four years,” Charlebois said.

Councillor Julie Séguin is the only new member of Hawkesbury council this term. She said her mandate is clearly to elevate and inspire the town currently, and in the future.

“We will work together for our town, our citizens, our children,” Séguin said.

On October 24, Councillor Yves Paquette was elected to his third term. He said working together as a team will be important during the next four years. Councillor Raymond Campbell, who is beginning his second term, made similar remarks.

“I am looking forward to working with the new council for the well-being of the citizens of Hawkesbury,” Campbell said.

Councillor Antonios Tsourounakis is beginning his second term and was optimistic about what lies ahead.

“There’s great things coming forward for Hawkesbury and I’m looking forward to making them happen with this council,” said Tsourounakis.

The inaugural meeting was the beginning of a fourth term for Councillor André “Cham” Chamaillard. He emphasized how council is always there for citizens and encouraged residents to contact councillors with any needs they have regarding town services.