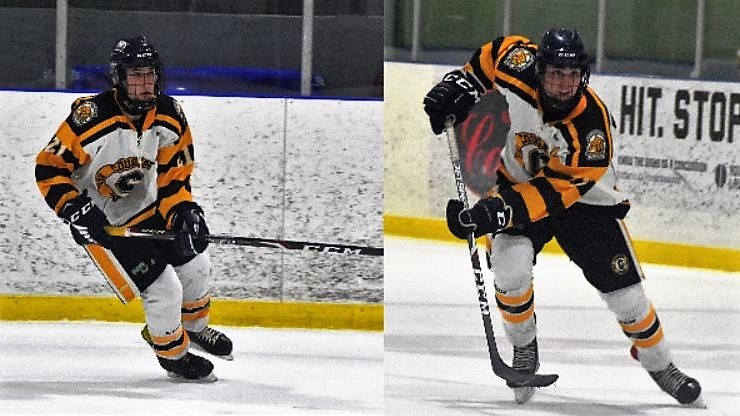 Hot goaltending declawed the Vankleek Hill Cougars on the weekend, as they fell 6-4 to the North Dundas Rockets at home in Hawkesbury on Saturday night (November 12).

North Dundas netminder Anton Moshchensky stopped 47 of 51 shots the Cougars fired his way at the Robert Hartley Sports Complex. The result kept the 10-3 Rockets tied for first place in the National Capital Junior Hockey League (NCJHL) standings. South Grenville, Gatineau-Hull, North Dundas, and St-Isidore are all tied at the top of the league, with 20 points each.

Vankleek Hill trailed 3-2 heading into the third period, but Alexandre Chenier and Eric Skyba each scored to put the Cougars up 4-3 by midway through the final period. But North Dundas goals six seconds apart with just under eight minutes left in the game restored the Rockets’ one-goal lead.

“It looked good for a while, but then they scored those two fluke goals,” commented Cougars Head Coach Franky Dopelhamer. “

Mikael Bissonnette and Maxime Lalonde added single goals for Vankleek Hill. Cougars netminder Frederick Duroucher-Bourdon, who has been solid all season, struggled against the Rockets.

“We missed a lot of chances and let in some really bad goals,” Dopelhamer observed. “It was not our best game in net on Saturday, but it happens.”

The Cougars record fell to 7-4, leaving the team in sixth place in the standings, with 14 points in 11 games. The 9-5 Clarence Castors sit in fifth with 18 points, but have played three more games than Vankleek Hill.

There is significant parity among the top six teams in the NCJHL this season and no runaway favorite for the league championship.

“I think anyone can beat any other team on a given night,” said Dopelhamer, whose squad will face two of the teams tied for first in its next two games. “The games this weekend are really big games for us.”

On Saturday, November 19, Vankleek Hill faces the South Grenville Rangers, in a home contest at The Bob in Hawkesbury. On Sunday (November 20), the Cougars will travel to face the Gatineau-Hull Volant at Centre Slush Puppy in Gatineau.