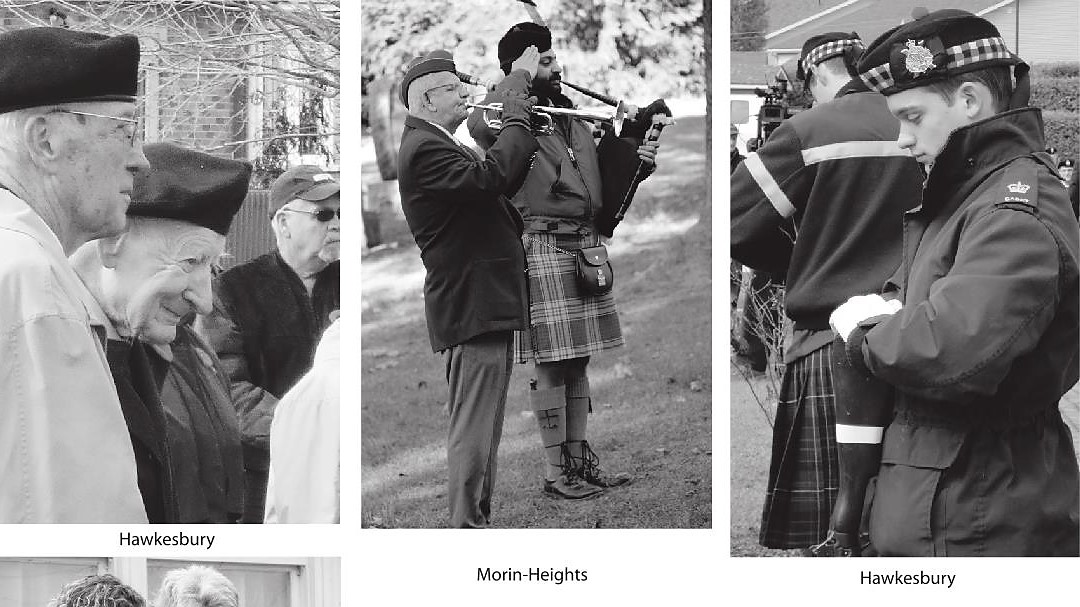 Remembrance Day photos from the region published in the November 14, 2012, edition of The Review. Photos: Review Archives

The Review, November 14, 2012 – ONTARIO – Talks have broken down between the provincial government and the Ontario Secondary School Teachers’ Federation (OSSTF) resulting in some public high schools taking strike action on Monday, November 12. Weekend talks left the province and the OSSTF without an agreement, which prompted union president Ken Coran issuing a statement that strike action would be taken at more than 20 school boards, including the Upper Canada District School Board.

The Review, November 12, 1997 – HAWKESBURY – The closure of the Canadian Uniform Limited plant in Hawkesbury reflects a disturbing pattern in the textile industry, says a local union representative. About 35 workers will lose their jobs when the company’s only manufacturing facility closes on December 18. “It is very unfortunate that corporate head office is no longer interested in having any manufacturing,” said United Steelworkers of America representative Dave Lipton.

The Review, NOVEMBER 7, 1972 – PLEASANT CORNERS – The 88 Grade 8 students of Prescott County Public School (PCPS) and their teachers are planning through raising funds, a six-day trip to Halifax in late May or early June of 1973. The trip would take them to Québec City, Moncton, Annapolis Valley, Halifax and back. The students are now engaged in collecting returnables such as soft drink bottles and will be visiting every home in Hawkesbury and Vankleek Hill during the next two weeks. Other fundraising activities will follow.

The Review, NOVEMBER 13, 1947 – HAWKESBURY – Hundreds of local citizens lined the streets, all wearing poppies and many carrying wreaths to be placed at the cenotaph in memory of loved ones lost in the war. Mayor Dr. C.E. Lafrance, addressing the gathering said in part: “The people of this town and community owe both the returned men and the heroes who did not return a tribute that will never be paid.” He urged people to practice the principals of peace and justice and to be ever mindful of ideals for which thousands are still suffering.

Cheapskates getting the news for free

The Review, NOVEMBER 19, 1922 – VANKLEEK HILL – Some subscribers inform us that they are bothered by neighbours borrowing their copy of The Review and the habit in some cases has become a nuisance. The Review costs less than four cents an issue so it is not as if the neighbours could not afford a copy themselves and there is no reason to borrow a paper from a current subscriber. Just forward the price and you won’t have to bother your neighbours for a whole year!

The Review, August , 1897 – VANKLEEK HILL – In the district there has been a bountiful rainfall, which will be of incalculable benefit to the country, not only in extinguishing bush fires and making fall ploughing possible, but also replenishing wells, which were in some districts exhausted, farmers having to draw water for stock, etc.