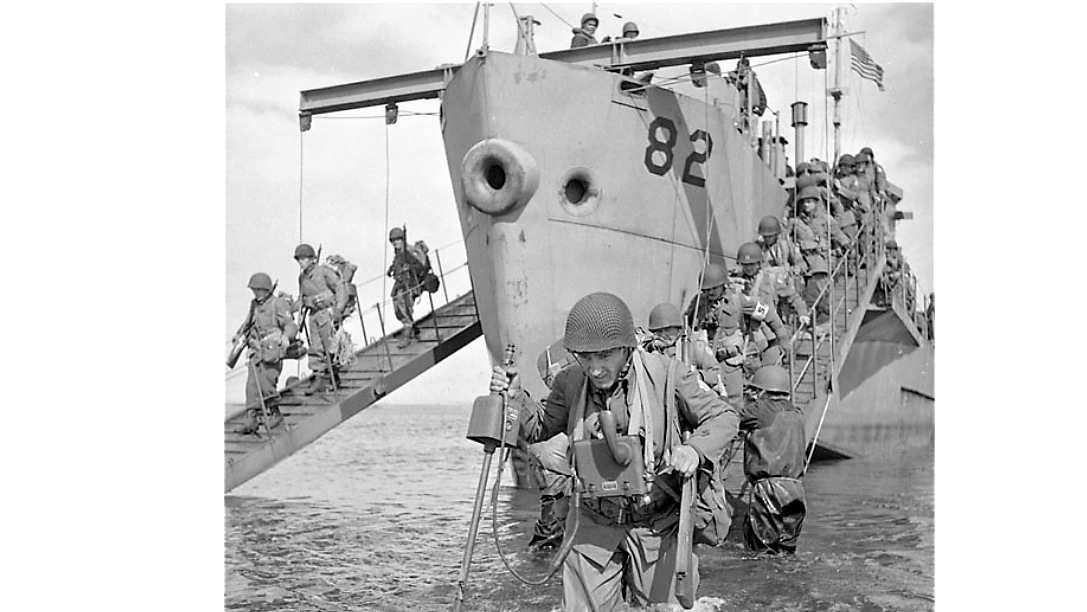 by Shawn MacWha, Special to The Review

During World War II, there were only two instances when Axis troops occupied North American soil. On the east coast, a small party of German sailors and scientists briefly landed at Martin Bay, Labrador, in October of 1943 to set up a small unmanned meteorological station. This site was so remote that the Canadian government did not learn of it until 1977. Japanese incursions in the Pacific, on the other hand, were much more forceful and required a large-scale military response, involving both Canadian and U.S. troops.

On June 6 and 7, 1942, just under 2,500 Japanese soldiers invaded and occupied the islands of Attu and Kiska, at the western end of Alaska’s Aleutian Island chain. These attacks were part of a broader strategy to extend the defensive perimeter around Japan following the Doolittle Raid of April, 1942, that saw American bombers attack Tokyo for the first time.

Seeking to push the Americans away from their homeland, Japanese forces targeted both the Aleutians and Midway Island, in a two-pronged attack to dominate the North Pacific. Unfortunately for the Japanese, the Battle of Midway was an unmitigated disaster that marked a turning point in the war. But in the far north their forces were much more successful. Not only did they take their objectives without significant loss, but they also managed to hold on to them until well into 1943.

The presence of Japanese troops in Alaska was of obvious concern to Washington and Ottawa. Even as the Japanese settled in and began building defenses, plans were being drafted to oust them from their newfound perch in America. The U.S. military originally viewed the problem of liberating the islands as being a domestic one, but following a series of discussions between senior U.S and Canadian officers in early 1943, both nations came to see the situation as a matter of continental concern that required a united response.

At the end of May, 1943, it was agreed that Canadian forces would assist the Americans with operations in the Aleutians, although as it turned there was not enough time for Canadian soldiers to join in the attack on Attu, which the U.S. Army had already launched a few weeks earlier. This was fortunate for the Canadians, as the Battle of Attu was a bloody affair that saw the Americans loose more than 500 men to enemy fire. The fight ended dramatically on May 29, when more than1,000 Japanese soldiers – out-manned and out-gunned – attempted a final, desperate bansai charge in an effort to break through the American lines. They failed, and by the end of the day, only 29 out of the island’s 2,350 original defenders remained.

With Attu back in American hands, attention turned to the island of Kiska, which was the militarily more important objective due to its superior harbours and landing fields. The Japanese garrison on this island was estimated to be between 9,000 and 10,000 strong, and these troops had more than a year to prepare the defensive positions that riddled the island. To overcome this challenge, the allies assembled a force of almost 34,500 men, of which approximately 5,500 were Canadian. The Canadians were organized into two main fighting formations; the 13th Infantry Brigade of the 6th Infantry Division and the First Special Service Force – a joint US-Canadian Commando Unit better known as The Devil’s Brigade.

At the time of the Battle of Kiska, the 13th Brigade was made up of soldiers from the The Canadian Fusiliers (London, Ontario), The Winnipeg Grenadiers, The Rocky Mountain Rangers (Kamloops, British Columbia), and Le Régiment de Hull. Augmented by an artillery regiment, a light anti-aircraft battery, a company of engineers, a company of New Brunswick machine-gunners and a medical company from Toronto, the brigade numbered 4,800 men. Fighting alongside of them were also 700 Canadian members of the First Special Service Force. These Canadians, supported by the Royal Canadian Air Force and the Royal Canadian Navy, landed on Kiska on August 16, 1943, alongside almost 30,000 Americans. 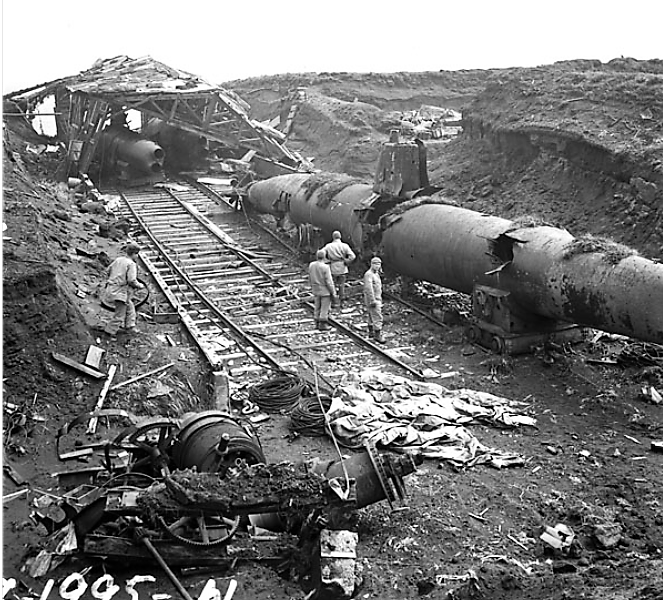 Canadian and American soldiers examining an abandoned Japanese submarine at Kiska, Alaska, in September of 1943. Photo: Library and Archives Canada

Shocked by the brutal fighting during the Battle of Attu earlier that that summer, the allies expected a tough fight, but none was forthcoming. The Japanese, realizing that their northern flank was no longer defensible, had sensibly evacuated their garrison from Kiska at the end of July of 1943. and when the allies landed on its beaches there was no one left on the island.

That is not to say that there were no casualties. Tense Canadian and U.S. soldiers looking for hidden Japanese fighters were often on high alert and this led to some tragic incidents when the two armies unexpectedly bumped into each other. Over the course of the unopposed landings on Kiska 28 Americans and four Canadians were killed by friendly fire when troops mistook each other for an absent enemy. Four others, including a Canadian, were killed by Japanese booby traps and 71 Americans died when one of their destroyers struck a mine off the waters of Kiska. In addition to these fatalities, more than 150 allied soldiers were wounded or fell ill during the reoccupation of Kiska – a high price to pay for an abandoned island.

While the liberation of Kiska cannot really be viewed as a major battle, given the absence of enemy forces, it was, after Canada’s doomed defence of Hong Kong in 1941, our largest action in the Pacific theatre during World War II. More importantly though it marked the first time in history when Canadian troops came to the assistance of our American neighbours on North American soil and helped them to reclaim territory held by a hostile power.

This week, as we mark Remembrance Day in Canada, the world faces the largest war in Europe since 1945. It is important to remember the brave soldiers who landed together at Kiska and to know that in the darkest hours friends will stand by friends. 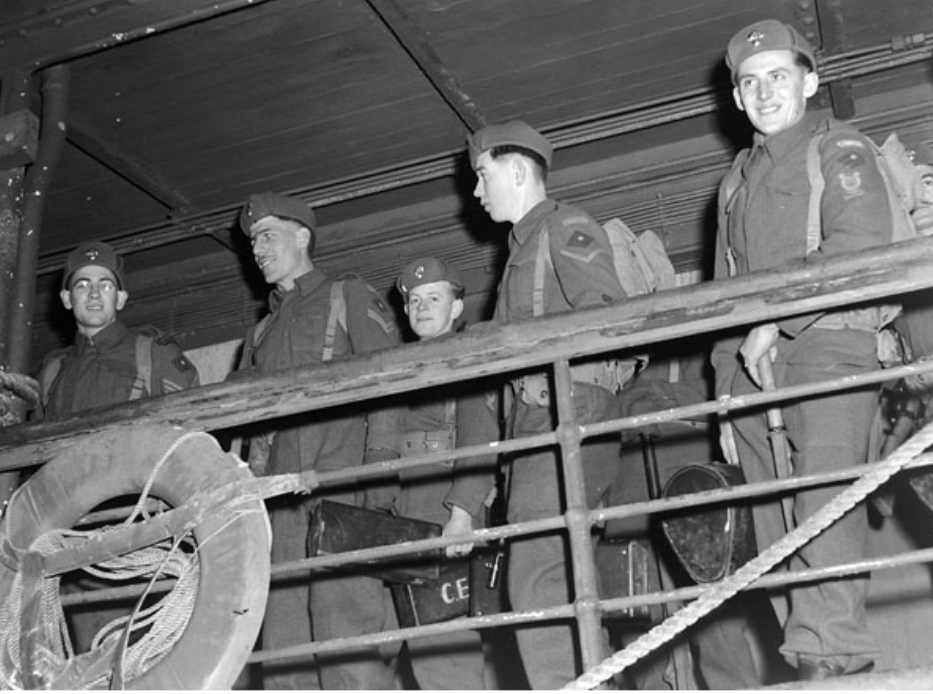 Canadian soldiers returning to British Columbia after the Battle of Kiska, Alaska, in November of 1943, Photo: Library and Archives Canada