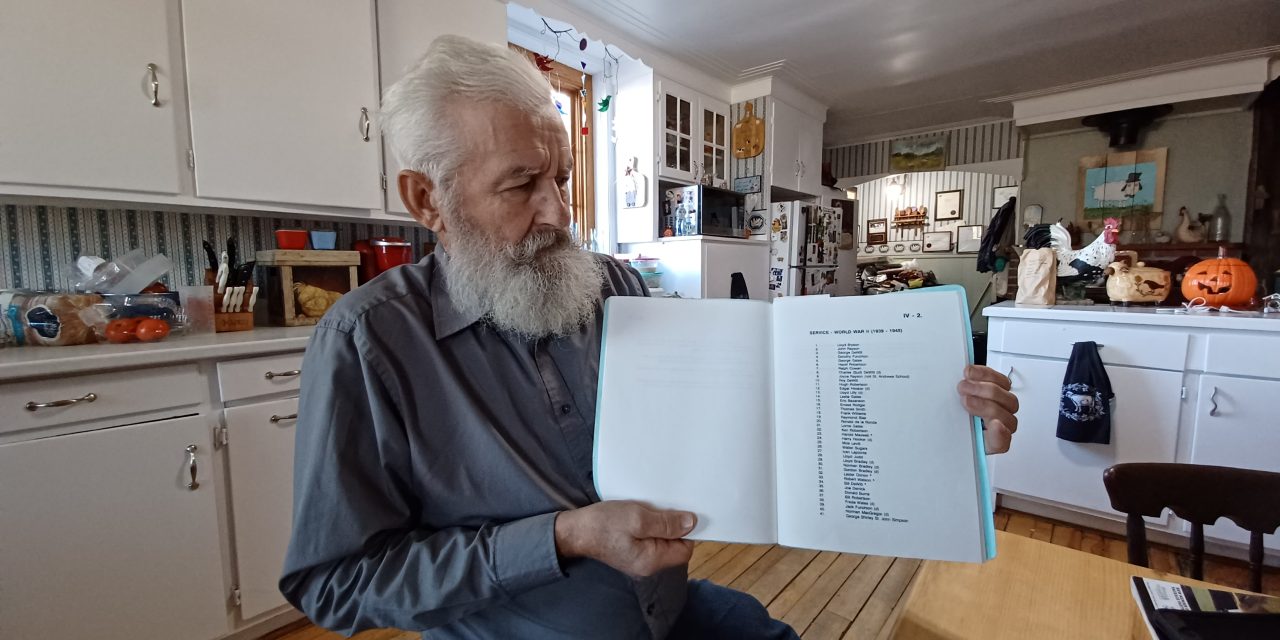 Robert Rodger of St-André-d’Argenteuil with a list of 41 residents from the community historically known as St-André-Est/St. Andrew’s East, who served in World War II. Four of the local men were killed. Photo: James Morgan

Robert Rodger is on a mission to have the wartime sacrifice of four men from St-André-d’Argenteuil publicly recognized again.

During World War II, 41 people, men and women from what was then known as St-André-Est/St. Andrew’s East and surrounding area served in various branches of the military. Bill DeWitt, Lester Dorion, Harold Maxwell, and Robert Watson did not return home. According to Rodger, a plaque honouring the four men used to be attached to the front of the local post office, but it was stolen a few years ago. Now, he wants a new plaque installed.

Rodger has contacted Argenteuil-La Petite-Nation Member of Parliament Stéphane Lauzon’s office and they are making efforts with Veterans Affairs Canada and the Department of National Defence to have a new plaque created.

The cause to have a new World War II memorial plaque installed in St-André-d’Argenteuil is a personal one for Rodger. He is named after Robert Martin Watson, one of the local men killed during the war. Watson’s family farm was directly across the road from Rodger’s family’s farm on what is today Route 327/Route des Seigneurs.

Watson was born on February 9, 1921, and died on October 4, 1943, while serving as a Sergeant in the Royal Canadian Air Force (RCAF) and attached to 76 Squadron, a bomber unit of the Royal (British) Air Force (RAF). On October 4, 1943, the RAF sent a letter to his parents, William G. Watson and Cecilia Mary (nee Albright) Watson, informing them their son had not returned from an operational flight and was presumed missing. Veterans Affairs Canada documents indicated he was later declared “missing, presumed dead,” and subsequently, “presumed dead.”

Watson is buried at a war cemetery in Sage, Germany, but his name and a brief explanation of his military service is included on the headstone in the St. Andrew’s protestant cemetery where his parents are buried.

“I was named Robert Rodger and got ‘Bobby’ right of the bat,” Rodger said, describing how he was named after his family’s neighbour.

Rodger said Harold Maxwell, another of the four local men killed during the war, lived near the Rodger and Watson families on Beech Ridge, also known as Coteau des hêtres.

Soon after Robert Watson was killed, his parents sold their farm and moved into Lachute.

He wants the four local men who did not return from the war properly commemorated again.

“My tribute to these guys is to get it back up on the wall.”

Rodger also remembers from his youth, two respected army officers who lived in St. Andrew’s East. One was Major General Frederick Ross Phelan (1885-1970). Phelan served in World War I and was appointed Staff Captain of the 11th Canadian Infantry Brigade in 1917. When the war ended, he was appointed Deputy Assistant Quartermaster General at Canadian Corps Headquarters with the rank of Lieutenant-Colonel. During World War II, Phelan served as commander of all Canadian Infantry Reinforcement Units in the United Kingdom, commander of Canadian forces in Newfoundland, and Director General Reserve Army before retiring as a Major-General in 1945.

The other prominent officer Rodger remembers living in St. Andrew’s east is Duncan Stuart Forbes (1889-1965). Forbes was awarded the Military Cross for his service in World War I. An accomplished athlete and academic, he was appointed Director of Athletics at McGill University in 1923 and served in that role for 17 years. He returned to military service during World War II, becoming senior machine gun officer for Canada.

Forbes was a Lieutenant Colonel at the end of the war and was awarded the Order of the British Empire for his service. He retired as athletics director at McGill in 1946. Forbes held degrees from the university in engineering and architecture and was a lecturer of both there. He was involved with coaching and the development of rugby, soccer, sailing, and hockey programs at McGill.

Rodger remembers both Forbes and Phelan as down-to-earth people who would help at church events and had no pretensions about their military achievements.

“They didn’t brag about it. They had no airs about them,” said Rodger.