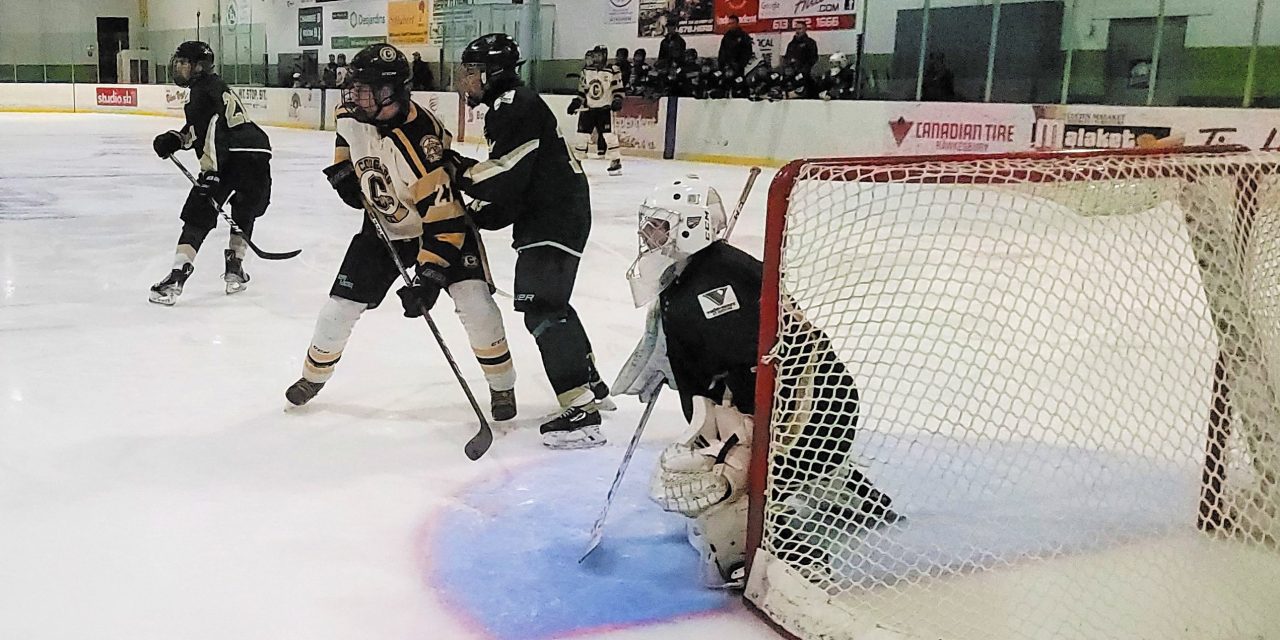 St-Isidore netminder Tristan Trudel was the star of the game, stopping 46 of 48 shots, as the Eagles took a 4-2 road win over the Vankleek Hill Cougars on Sunday evening (October 23). Photo: Reid Masson

The St-Isidore Eagles stopped the winning streak of the Vankleek Hill Cougars on Sunday, October 23, one day after the team had taken a solid road win over the Almonte Inferno.

The Cougars are now tied for second place in the National Capital Junior Hockey League (NCJHL) with the Clarence Castors. Vankleek Hill has only one game scheduled during the upcoming week, but it is a big one – a home contest against the defending NCJHL champion Castors at the Robert Hartley Sports Complex in Hawkesbury on Saturday, October 29. Second place in the NCJHL will be on the line when the two teams face off at The Bob at 7:30 p.m. 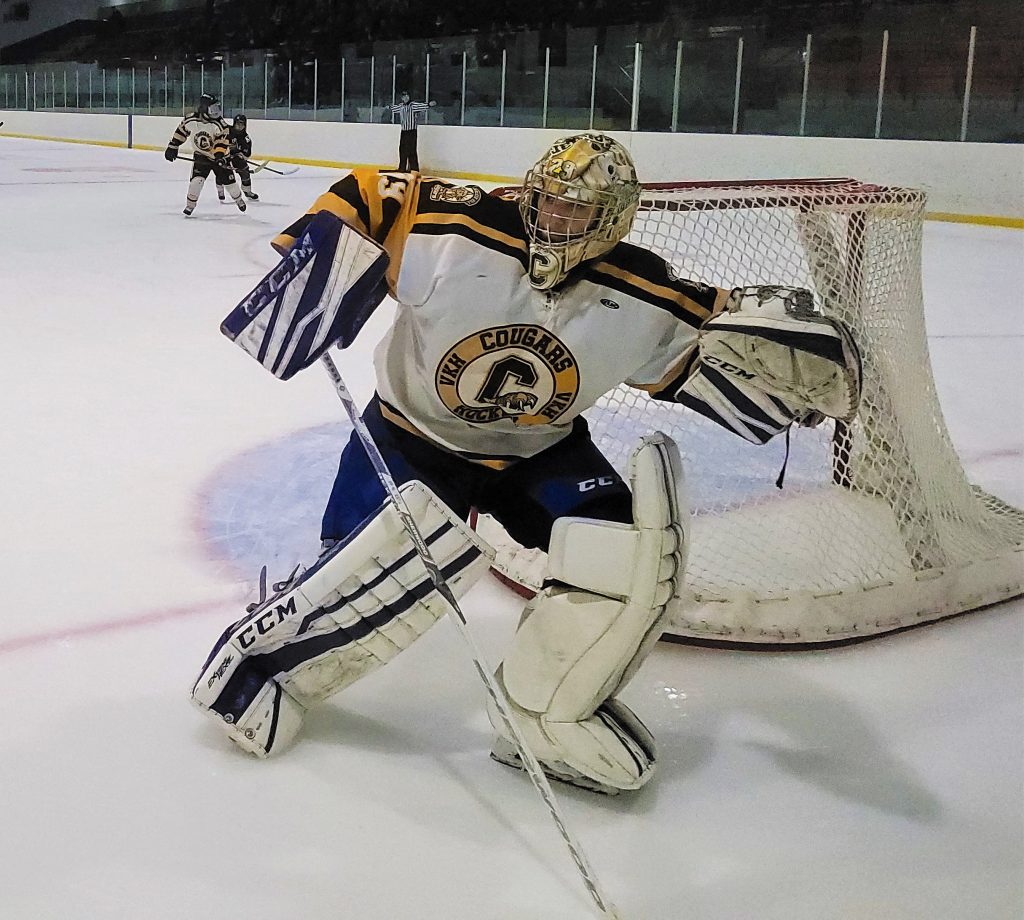 St-Isidore netminder Tristan Trudel was the star of the game, stopping 46 of 48 shots, as the Eagles took a 4-2 road win over the Vankleek Hill Cougars on Sunday evening (October 23).

The Cougars outshot St-Isidore 48-18 on the night, but each time the Vankleek Hill squad bore down on the Eagles’ net, Trudel stood tall. Vankleek Hill goaltender Frederick Duroucher-Bourdon also played well, but was undone by undisciplined play by the Cougars, which led to two St-Isidore powerplay goals.

The Eagles led 2-1 after the first period at Hawkesbury’s Robert Hartley Sports Complex and were fortunate to score the only goal in the second frame, despite being outshot 25-3. An early goal in the third period by St-Isidore put the game out of reach.

Alexi Gaudreau, Cedric Hughes, Arnaud Leroy and Tyler Proulx were the goal scorers for St-Isidore, while Jacob Levac and Cedric Pharand each had two assists. John Mahoney and Mathieu Lévesque replied for the Cougars.

The loss kept the Cougars in a tie for second place with the Clarence Castors in the National Capital Junior Hockey League (NCJHL) standings, with a record of six wins and two losses. With the win, the Eagles improved their record to five wins against three losses and are tied for fourth place in the NCJHL with the South Grenville Rangers and North Dundas Rockets.

The Inferno led 1-0 after one period, but the Cougars responded with three straight goals in the second by Joshua Desjardins, Andy Lightle-Blais and Saul to take a 3-1 lead. Almonte scored before the end of the period to get the game to move back within a goal at 3-2 heading into the third.

Saul scored his second of the game and the eventual winning goal less than five minutes into the third period. Almonte scored midway through the final frame, but the Inferno players were unable to get the puck by Tessier again despite a furious rush in the dying minutes of the game.

Alexandria Glens forward Nicholas Bell was named as one of three Eastern Ontario Junior Hockey League (EOJHL) Stars of the Week for the week of October 20.

Bell had two goals and three assists during the week. The 18-year-old forward has been a bright spot this season for the Glens, who have not won yet this season and sport a record of 0 wins and nine losses. Bell leads the Glens in scoring with seven points in nine games. 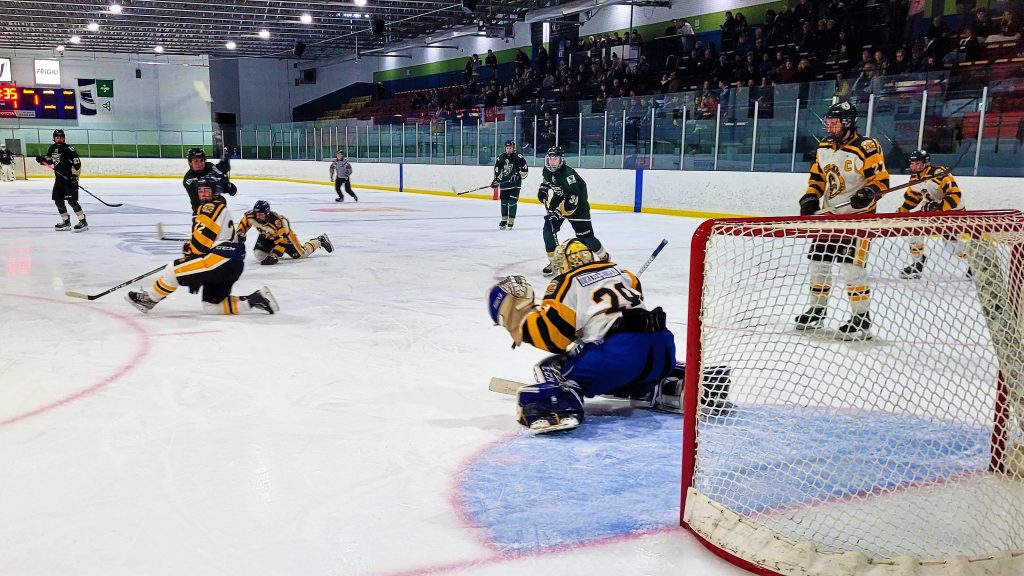