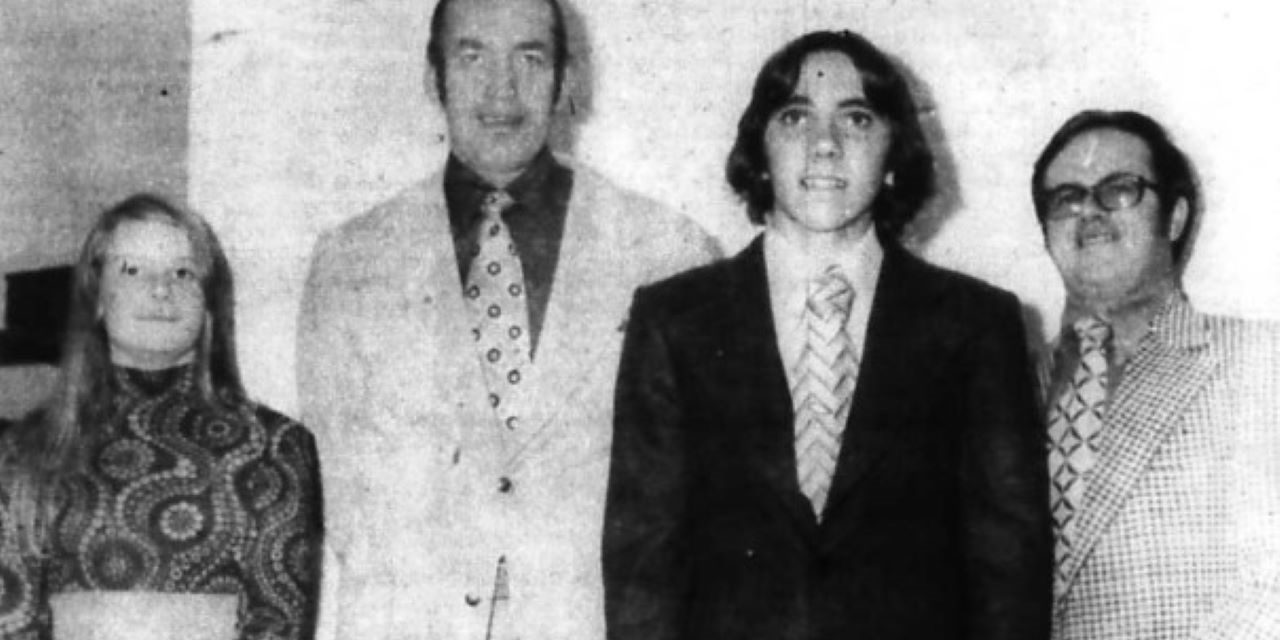 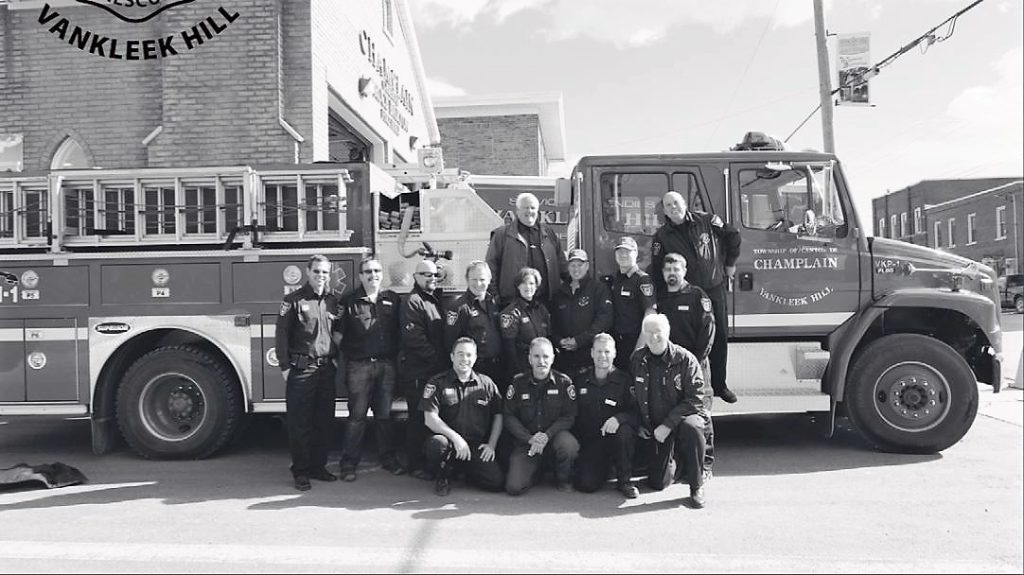 A special section was published in October 31, 2012, edition of The Review to commemorate Vankleek Hill Fire Chief Bruce Barton (top centre), who was retiring at the end of the year after 45 years with the Vankleek Hill Fire Department. The fire station in Vankleek Hill was renamed after Barton in honour of his years of service to the community. Photo: Review Archives

The Review, October 31, 2012 – VANKLEEK HILL – It’s no small thing to stay the course for 45 years. In 2012, as Vankleek Hill’s fire chief, Bruce Barton, prepares to retire, you could think about the numbers. One practice, every two weeks for two hours and 45 years, is 2,340 hours – not counting the hours spent in training, fighting fires, assisting at accidents, volunteering at events, or visiting children in schools. The lack of equipment and training when Barton first joined the force almost a half century ago meant that firefighters had to rely completely on each other. Decades ago, firefighters received a coat, hat, and rubber boots as their safety equipment. Barton says things have changed a lot – and for the better: “Everything is about safety now and there are a lot more rules.”

The Review, October 29, 1997 – HAWKESBURY – Town taxpayers will save at least $375,000 and benefit from improved police protection under an Ontario Provincial Police takeover of Hawkesbury’s police force. Years of controversy and debate ended last Tuesday, when town council approved a five-year OPP service contract. The problem-plagued municipal force will be absorbed by the OPP, which will set up an integrated detachment in an expanded town police station. “I am extremely happy,” said Hawkesbury Police Association president Jacques Laflamme, a longtime advocate of the OPP takeover.

The Review, October 30, 1947 – CHUTE-À-BLONDEAU – Stewart Allen and Victor Paquette of the staff of Neil Fraser & Son Transport, of Vankleek Hill, suffered severely burned backs, legs and arms and narrowly escaped death when their truck and trailer overturned and the fuel tanks exploded near Chute-à-Blondeau, on Route 17 early Tuesday morning. The truck collided with a horse and cart during a heavy fog, as the driver was attempting to pass when he noticed a vehicle without lights coming in the opposite direction. The driver’s cab was crushed down to within a foot of the floor and Paquette was first out of the cab unhurt, but received burns when he opened the door to allow the driver, Allen, who was trapped inside, to escape. The men were taken to Dr. T.W. Smith’s Hospital in Hawkesbury and are recuperating.

You can’t please everyone, or anyone – Review editor

The Review, October 27, 1922 – VANKLEEK HILL – Getting out a newspaper is no picnic. If we print jokes folks say we are silly; if we don’t they say we have no sense of humour. If we publish original matter they say we lack variety; if we publish things from other papers they say we are too lazy to write. If we don’t go to church we are heathens; if we do we are hypocrites. If we stay in the office we ought to be out rustling news; if we are out rustling news we are not attending to our business at the office. What in thunderation is a poor editor to do anyhow? Like as not, some will say we swiped this from an exchange. We did.

A poetic plea for football at VCI

O where are they? The football lies, deserted on the entry floor

And shall the game so long renowned enpractised be where boys are found?

We’ve boys enough should we select; But some think tennis is more fun

Of two such pastimes, why neglect the nobler and the manlier one?

Though tennis lures one now and then, think ye ’twas meant for boys and men?