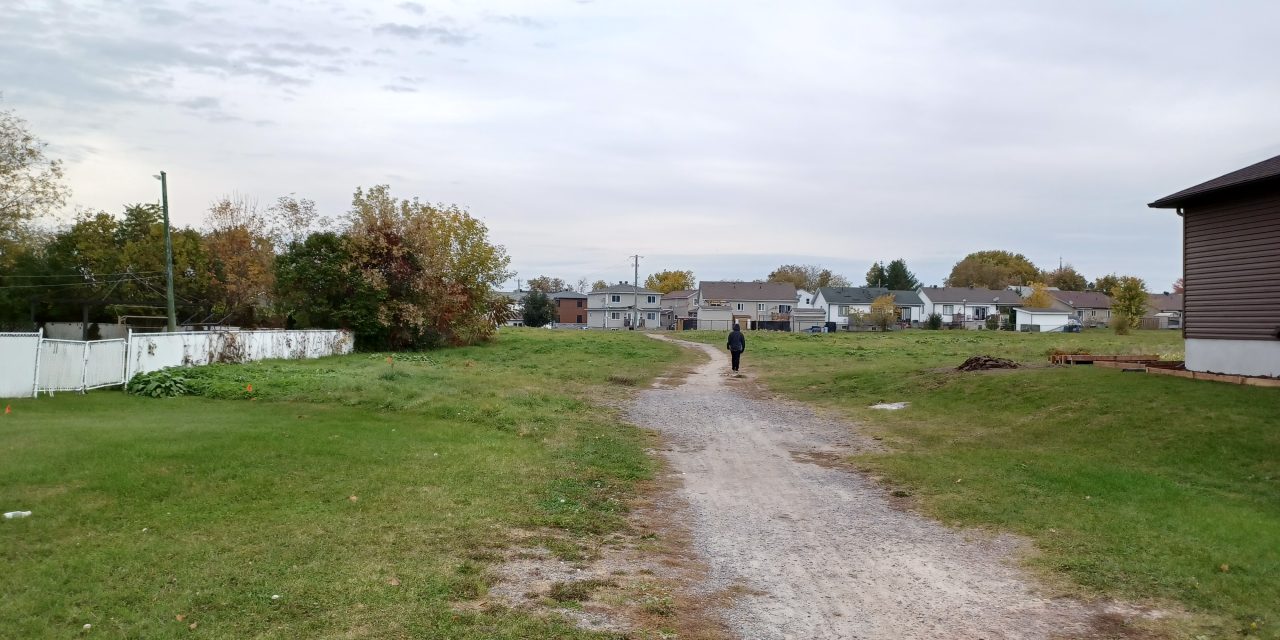 This path connecting the two sections of James Street between Higginson and Nelson streets in Hawkesbury is the site of the proposed Place de la station residential development. Photo: James Morgan

The approval of the ZBA’s on October 11 followed a presentation at a public meeting held on September 29, where the application was presented by developer DevCore to construct 95 rental apartments and seven blocks of townhouses totaling 34 main townhouse units and 21 secondary dwelling units located in four of the seven townhouse blocks. The apartments will be for tenants aged 55 and older.

The development, known as Place de la station, is located on vacant land between Higginson and Nelson streets, using the unopened section of James Street as a pedestrian-only thoroughfare. The project is called Place de la station, because Hawkesbury’s former railroad station was located at the site.

On September 29, DevCore Director of Development and Planning Daniel Landry appeared at the public meeting to discuss the project. He explained how the Gatineau-based company has developments across the National Capital Region, in Russell, Limoges, Casselman, Thurso, and Cornwall.

“I know the town well,” remarked Landry, in reference to previous work experience in Hawkesbury.

“I’ve walked a lot at the site in question,” he said.

Landry listed several advantages to the location of the proposed development, including that it is close to the Robert Hartley Sports Complex, the town hall, businesses, La Cite golf course, and schools.

“It’s a neighbourhood with a very well-placed site,” said Landry

He further commented how the existing James Street right-of-way is treeless and not well-lit.

“It’s a trail, which is very, very utilized,” Landry said.

He described the Place de la station proposal as an “ecoquartier”, or eco-village, due to its density, emphasis on social inclusion, and connectivity.

Under the current proposal, as much greenspace would be preserved as possible in the neighbourhood. The James Street right-of-way will remain a pedestrian-only route, with townhouses fronting it.

Landry said the apartment building in the proposed Hawkesbury development will be similar to the one constructed in Thurso. He noted how 25 per cent of the Thurso tenants are on a fixed income and the project was developed in cooperation with the federal Canada Mortgage and Housing Corporation.

The proposed townhouses will also have separate basement accesses to permit a separate rental accommodation.

Landry said that DevCore’s rationale for the development is that Hawkesbury needs housing, it is a welcoming community, and a new approach is being taken to urban planning.

There were no questions or comments from the public at the meeting, but written comments were read by Clerk Myriam Longtin.

Landry said the project could not function as planned if the street was open, because it would diminish the connectivity of the neighbourhood.

“Will there be an impact on municipal taxes for the homes already constructed?” asked another resident in a written comment.

Landry said the development would be good for the surrounding neighbourhood and the town’s tax base.

Another of the written comments was from Employment Services Centre of Prescott-Russell Executive Director Caroline Arcand.

“The Employment Services Centre of Prescott-Russell supports the project initiated by DEVCORE,” said Arcand, adding it will help address the local housing shortage.

Hawkesbury Chamber of Commerce President Murielle Huneault-Pilon told The Review the chamber of commerce is in full support of the development.

“We have a big lack of apartments in Hawkesbury,” she said.

Huneault-Pilon added it is difficult to attract new employment to town if there is insufficient housing for workers.

He said it will help merchants in the downtown area.

Mayor Paula Assaly said the development will be good for Hawkesbury’s housing and employment needs and will also grow the property tax base.

“Residents are complaining about the high rate of taxes; yet the underlying problem is such that the same residents have been sharing the load of the taxation repeatedly and will continue to do so unless there is growth within the perimeters of the town,” she told The Review.

At the council meeting on October 11, there was support from all councillors for the project.

Councillor Robert Lefebvre thanked the residents for their previous comments and assured them there are still details to be worked out in site plan preparation before construction begins.

“The zoning change is not the last step,” he said.

Councillor Antonios Tsourounakis was pleased consultation and cooperation resulted in a plan for such an irregularly shaped piece of land, and he commented on the economic benefits the development will hopefully bring.

“It would bring a lot of revenue and much needed housing to the town,” said Tsourounakis. 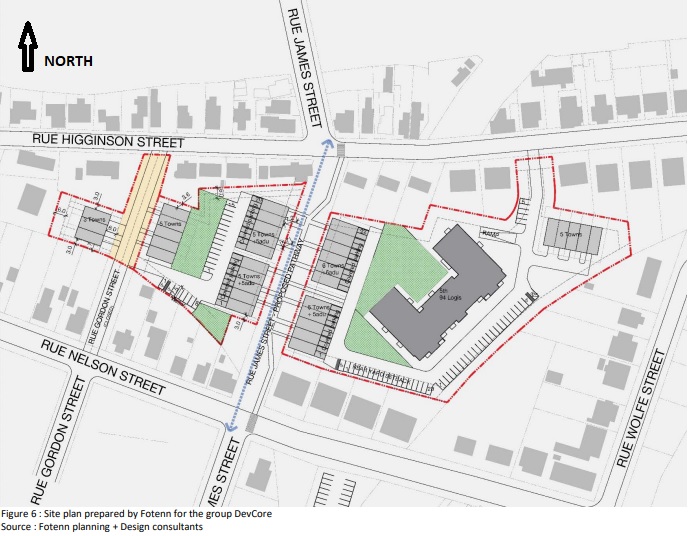 Map of the proposed Place de la station development in Hawkesbury. From Town of Hawkesbury documents