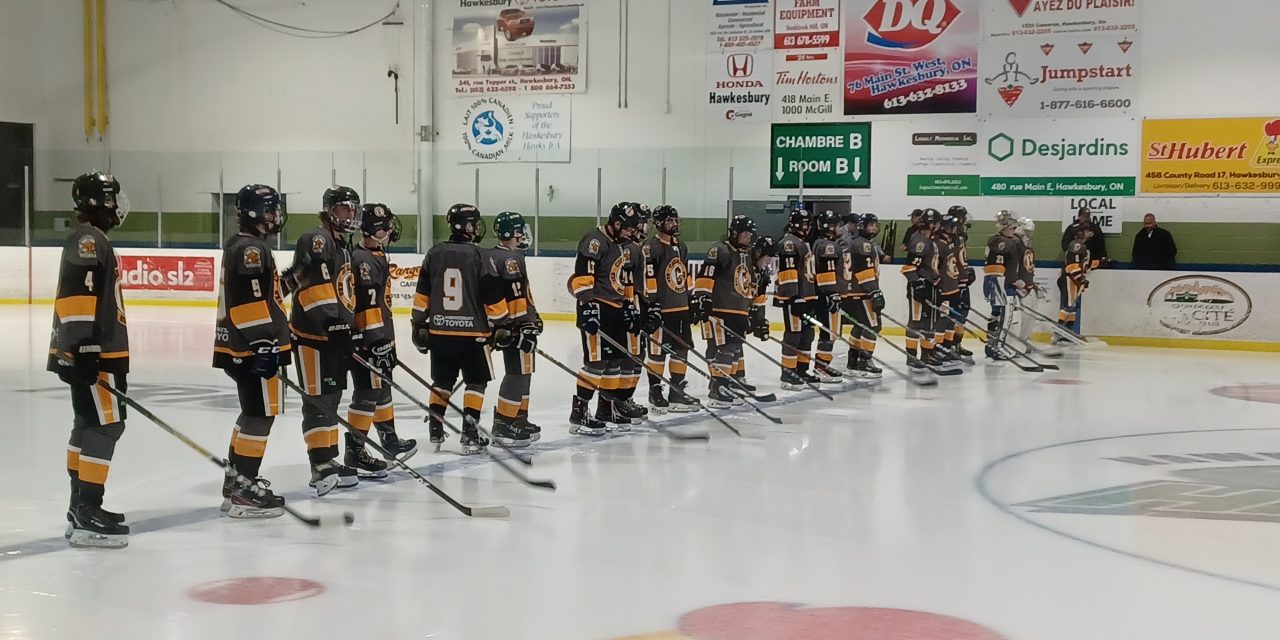 The 2022-2023 Vankleek Hill Cougars are introduced to the crowd at their temporary home at the Roberty Hartley Sports Complex in Hawkesbury during the team’s home opener against the Morrisburg Lions on Sunday evening (October 9). Photo: James Morgan

The Vankleek Hill Cougars enjoyed a stellar debut in the team’s temporary Hawkesbury home on Sunday, scoring two goals in the third to take a 5-3 win over the Morrisburg Lions in front of a large crowd at the Robert Hartley Sports Complex.

Andy Lightle-Blais fired home two goals, including the winner midway through the third period, as the Cougars improved to three wins against one loss on the season. Mikael Bissonnette also scored twice, while Joshua Desjardins added a single marker along with two assists and was named player of the game. Frederick Duroucher-Bourdon took the win in net, as the Cougars outshot the Lions 55-25 on the night.

The game was played in front of a crowd of more than 300 spectators, as the team’s followers who travelled from Vankleek Hill were joined on the night by new fans from Hawkesbury.

“It was a really good game, a great crowd and a great atmosphere,” said Cougars head coach Franky Dopelhamer, of the team’s home debut in Hawkesbury. “The players really enjoyed it.”

“It was different, but once we started it felt like we were at home. The crowd made us feel at home.”

With the win on Sunday, the Cougars sport a record of three wins against a sole loss and sit in fourth place in the National Capital Junior Hockey League standings.

It’s a really good start,” said Dopelhamer, who noted the Cougars are still playing without the team’s full roster. “Our big players have played big.”

Sunday’s game was a bounce-back performance for the Cougars, who were flat-footed the previous night in a 5-2 road loss to the North Dundas Rockets. Desjardins and Bissonnette scored the only markers for Vankleek Hill in the loss.

“It’s not fun, but it happens at all levels,” Dopelhamer said of the team coming out flat against North Dundas.

The Cougars are at home again in Hawkesbury this coming Saturday (October 15), when they face the Metcalfe Jets. Puck drop at the Robert Hartley Sports Complex is 7:30 p.m. On Sunday, October 15, Vankleek Hill travels to St-Isidore to face the Eagles in a 7:30 p.m. start at the St-Isidore Arena.

The Cougars will be bolstered in the team’s upcoming games with the addition of two top players. Alexandre Chenier was acquired from the Rockland Nationals last week and is expected to join the team for games next weekend. The Rockland native played last season for the Hawkesbury Hawks U18 AAA squad.