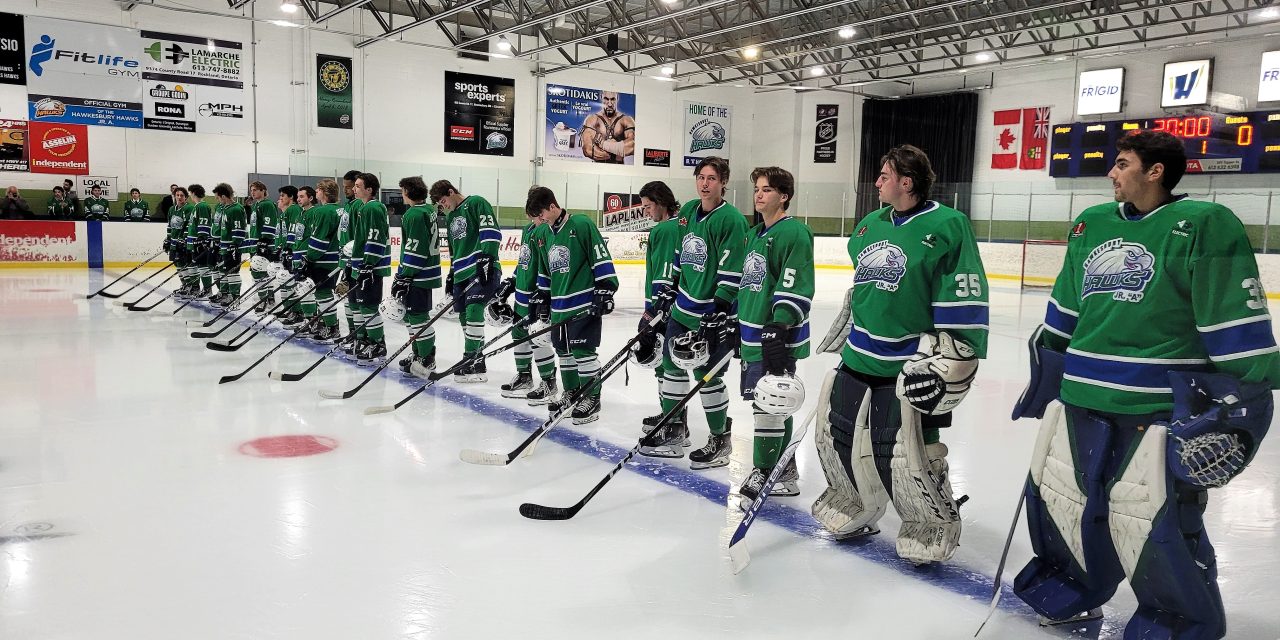 It was a tough weekend for the Hawkesbury Hawks, as the team dropp three straight games. File Photo: Reid Masson

The Hawkesbury Hawks will look to get back on the winning track in front of their hometown fans this Friday night (October 14), as they face the Pembroke Lumber Kings. Puck drop at the Robert Hartley Sports Complex is 7:30 p.m.

The Hawks finished with a record of one win and two losses in last weekend’s Central Canada Hockey League Showcase at the Bells Sensplex in Kanata, after a 3-2 loss on Monday (October 10) to the Brockville Braves closed out the team’s three games in three days over the Thanksgiving weekend. The Hawks now sport a record of three wins, three losses and one overtime loss and one shootout loss in eight games played and sit in fourth place in the CCHL’s Yzerman Division.

Nathan Gagne and Remi Gagne scored for the Hawks less than a minute apart midway through the third, but Hawksbury was unable to get any closer. Dimitri Pelekos stopped 41 of 45 shots in the loss. The loss left the Hawks exiting the CCHL Showcase with a 3-3-1-1 record on the season.

Pier-Olivier Allard, Noah Leithman, and Jeremy Tremblay scored goals, while Dimitri Pelekos made 18-saves, as Hawkesbury improved to 3-2-1-1 on the year. Brockville, which fell to 2-4-0-0, had goals from Colin Elliott and Thomas Haynes, while Philip Rondina made 29-saves in the loss.

Nicolas White had a hat-trick, Adriano Lombardo-Tullo, Kyle Leonard, Guillaume Labre, and Yanic Crete scored singles, while Hadyn Gould made 34-saves as Rockland improved on the year to 4-0-1-0.

Hawkesbury, which fell to 2-2-1-1, had two goals from Remi Gelinas, singles from Alex Fournier, Jakson Kirk, Nathan Gagne, and Jeremy Tremblay, while Dekon Randell-Snow made 37-saves in the loss.