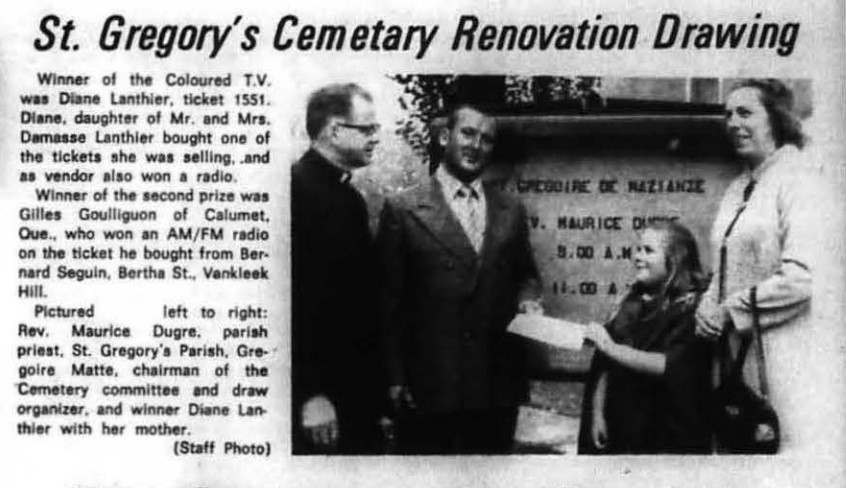 Photo and article from the October 11, 1972 edition of The Review.

The Review, October 10, 2012 – ALFRED – The United Counties of Prescott-Russell (UCPR) is taking steps to protect the Alfred Bog. Next year the UCPR will reclaim the last of the commercial peat lands adjacent to the bog, which is located off Peat Moss Road outside of Alfred. For years, a number of environmental groups have been lobbying to have the peat extraction stopped. Plans for the land are still up in the air, but this reclamation of land is expected to create a brighter future for the bog.

The Review, October 8, 1997 – VANKLEEK HILL – The Vankleek Hill Farmers’ Market may not be big, but it’s a growing enterprise, says organizer Audrey Sarrazin, an organic grower herself. The Saturday morning market at the Vankleek Hill fairgrounds was a pilot project this year that will become a regular event in 1998, Sarrazin said.

The Review, October 11, 1972 – QUEEN’S PARK – Ontario has announced plans to issue multi-year passenger car plates starting in 1973. Multi-year plates are expected to last three to five years, but registration fees will still be payable on an annual basis. The annual cost for an eight-cylinder car will be $40; a six-cylinder vehicle $32; and $23 for a four-cylinder car. The plates will have blue letters and numerals, three of each, separated by a crown on a white background, with the name ‘Ontario’ above and the slogan ‘Keep it Beautiful’ below.

The Review, October 16, 1947 – VANKLEEK HILL – The teenagers of Vankleek Hill have organized a recreational club and elected a new executive. The new executive is comprised of Phil Leader, president; Russell Conway, vice-president; Ines MacCaskill, secretary; Robert MacDonald, treasurer; and Joan Barton, program convenor. At last Thursday’s meeting of the club, the name of the organization was changed from ‘Jacks and Jills’ to ‘Teen Town’.

The Review, October 13, 1922 – HAWKESBURY – Daniel Timmins, aged 32 years of Hawkesbury, while walking across the Canadian National Railway bridge between Hawkesbury and Grenville, was struck and killed instantly by an eastbound passenger train at about 6:50 o’clock Sunday night. The unfortunate man had been to Grenville and had started to walk back to Hawkesbury over the railway bridge when he met with the accident. An inquest will be held.

The Review, October 15, 1897 – VANKLEEK HILL – Mr. and Mrs. John Hunter were seriously injured on Wednesday when they were thrown from their buggy. They were driving to East Hawkesbury and a little way east of Mr. Denis Hurley’s when something caused the horse to shy. Mr. Hunter suffered a broken collarbone and Mrs. Hunter a broken arm. Mrs. William Flood of Caledonia was painfully injured on Friday afternoon when she was thrown from her buggy. She was with two of her children in front of John McCallum’s hardware store and C. Raesbeck drove out of the Dominion Hotel yard and unable to control his horse collided with Mrs. Flood’s buggy, upsetting it as well as his own. Besides Mrs. Flood’s injuries one of the children was slightly hurt and Raesbeck received a bad cut on his head as well as face bruises and cuts.