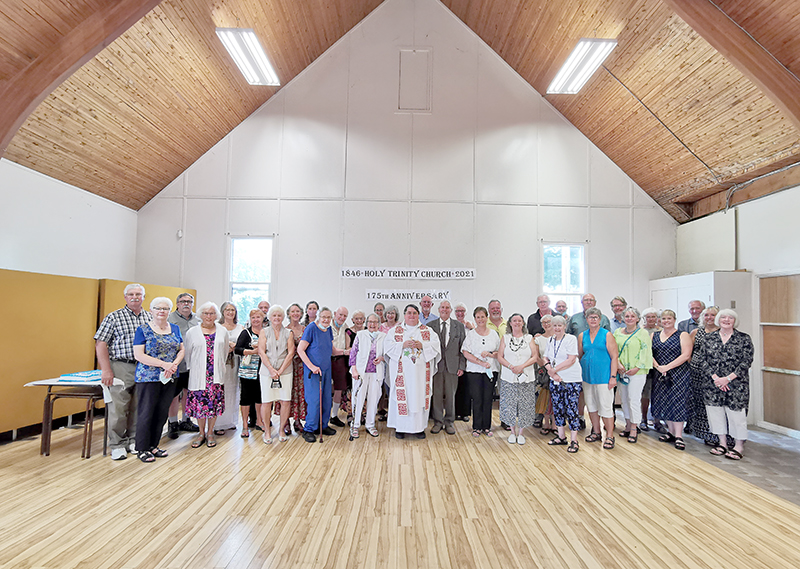 A service to celebrate the 175th anniversary of Holy Trinity Anglican Church in Hawkesbury took place in 2021, with attendees from various points of the five-church parish. Presiding at the anniversary service was the Venerable Frank Kirby, who attended church there as a child. Recently, the Reverend Bob Albert has taken leadership of the five-point parish. Photo: Louise Sproule

While the future of many church congregations is uncertain, the past is filled with memories of busy and vital times for church communities.

Holy Trinity Anglican Church in Hawkesbury celebrated its 176th anniversary on July 24 with a church service, followed by a luncheon where current and former parishioners reminisced while looking at displays of memorabilia.

We asked long-time parishioner 91-year-old Frances (Frankie) Higginson, who now lives in Ottawa, what the church had meant to her.

“It meant everything to me,” said Mrs. Higginson, adding that the religious aspect as well as the community were important.

“In those days, it was how we kept in touch with the community. Sunday was church and we were always there,” she recalled.

Trained as a teacher, she enjoyed teaching Sunday School, using her skills to share stories about God and Jesus, she explained. As a child herself, she recalls walking two-and-a-half miles to church to attend Sunday School in Cumberland, Ontario. “We walked there and back and didn’t complain; that is just the way it was,” she laughed.

Years later, attending services at Holy Trinity Anglican Church was a priority for her, her husband Randolph and their 10 children. “I got their clothes ready on Saturday, so we would be ready in time for church on Sunday,” she recalled.

Going to church was “a duty we put on ourselves. It was important to us. It was a different world back then,” she says.

Another steadfast member of the Holy Trinity Church congregation reflected on the past.

Mary Ellinor Partridge became an active member of the Holy Trinity Anglican Church congregation about 70 years ago, when she married Byers Partridge, whose family was part of the congregation. 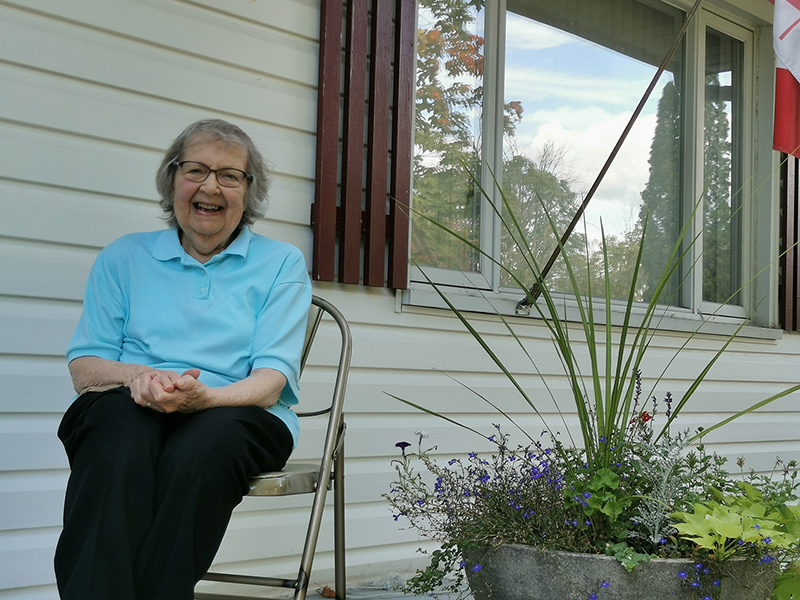 We spoke with Mary Ellinor Partridge about her involvement as part of the Holy Trinity Anglican Church congregation. She is seen here outside her Hawkesbury home.
Photo: Louise Sproule

“I wasn’t a ‘cradle’ Anglican,” recalls Mrs. Partridge, who had been a member of the United Church, but she says her mother-in-law was instrumental in introducing her to the Anglican community.

“I wasn’t confirmed for two or three years, but I gradually met the people and became involved in the newly-formed St. Monica’s Guild, a women’s group that met in the evenings,” Mrs. Partridge said. (St. Monica is the patron saint of married women).”

The group was for stay-at-home moms, Mrs. Partridge recalls. When children began going to school, the Ladies Guild was an option; that group met in the afternoon and was known for organizing the annual church bazaar, wreath-making and other fundraising efforts for the church.

“It was the fellowship and conversation around the table,” says Mrs. Partridge, recalling gatherings, meetings, wreath-making and more.

She thinks that while the world changed, church organizations did not.

“From a time when everything was closed on Sundays and there was little to do, it became a busier world, with mothers working outside the home, stores open on Sunday and various activities like hockey practice or tournaments happening on Sundays. If you’re working, you might have lots to do on the weekend. Home life had to be attended to,” Mrs. Partridge commented.

The sense of constancy, and being part of a group with traditions and routines created a bond between those who attended church together. But the changing world and workplace may have removed the focus from church connections and the recent pandemic made those bonds, among already-smaller congregations, even more tenuous.

“You can’t change a lot of what has already changed; you have to do what you can around what is happening now,” Mrs. Partridge said. “The world has changed but we still have 24 hours in a day,” she joked. “It’s what we do in those 24 hours that has changed.”

The Holy Trinity Anglican church community had marked its 175th anniversary at a church service in July 2021, but deferred gathering together socially at that time due to pandemic restrictions.

The church opened for its first service on August 16, 1846, and dates back to when Hawkesbury was a small cluster of homes and shops at the centre of which was Hawkesbury Mills, owned by the Hamilton family.

The stone church was built under the supervision of master stonemason William Allison, who had been involved in the area’s canal building project. Between 1857 and 1859, the church was changed with the addition of the side entrance, the addition of stone buttresses and a bell tower, making it reminiscent of 13th-century-style churches of Northampton. This work was entrusted to John W. Higginson, who was also involved in the construction of the adjacent rectory in 1873.

Today, Holy Trinity is part of a five-point parish, which includes Holy Trinity, Hawkesbury, St. John’s in Vankleek Hill, St. Michael of All Angels Church in Maxville; the Parish of Grenville/Calumet and the Chapel of St. Paul’s in Fenaghvale.

(Note: Historical references were taken from a brief history of the church written by the Reverend Bill Byers, included in the church’s 150th anniversary book called ‘Memories’, published in 1996. 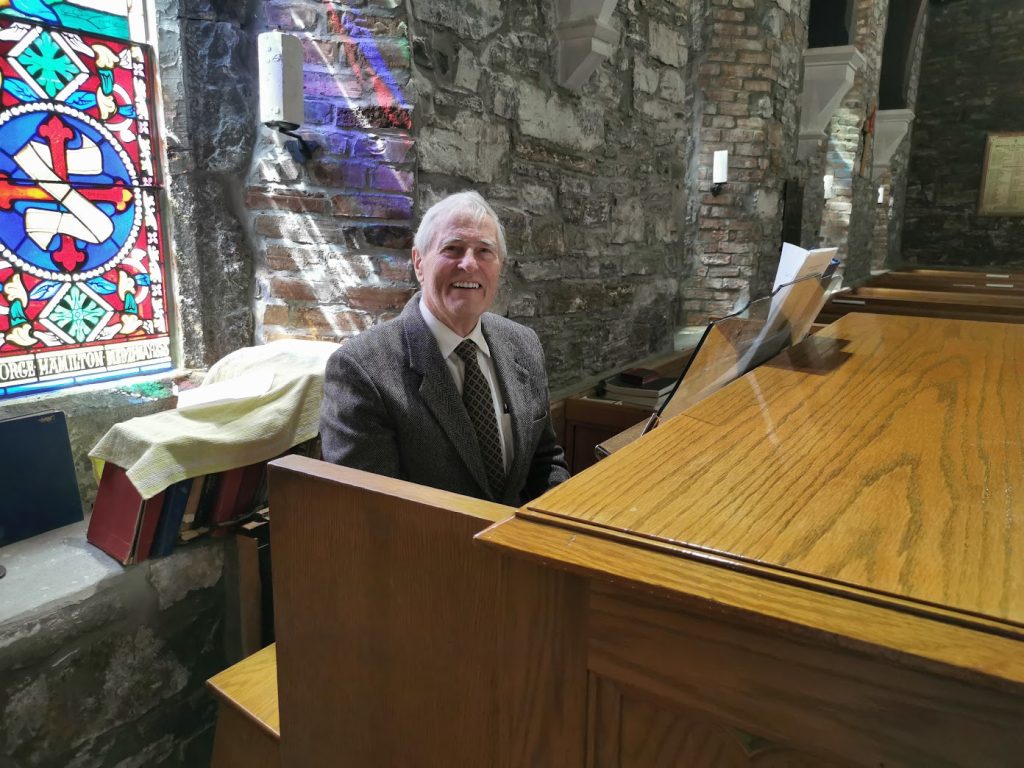 Michael Whetstone has been the organist at Holy Trinity Anglican Church for more than 50 years.
Photo: Louise Sproule 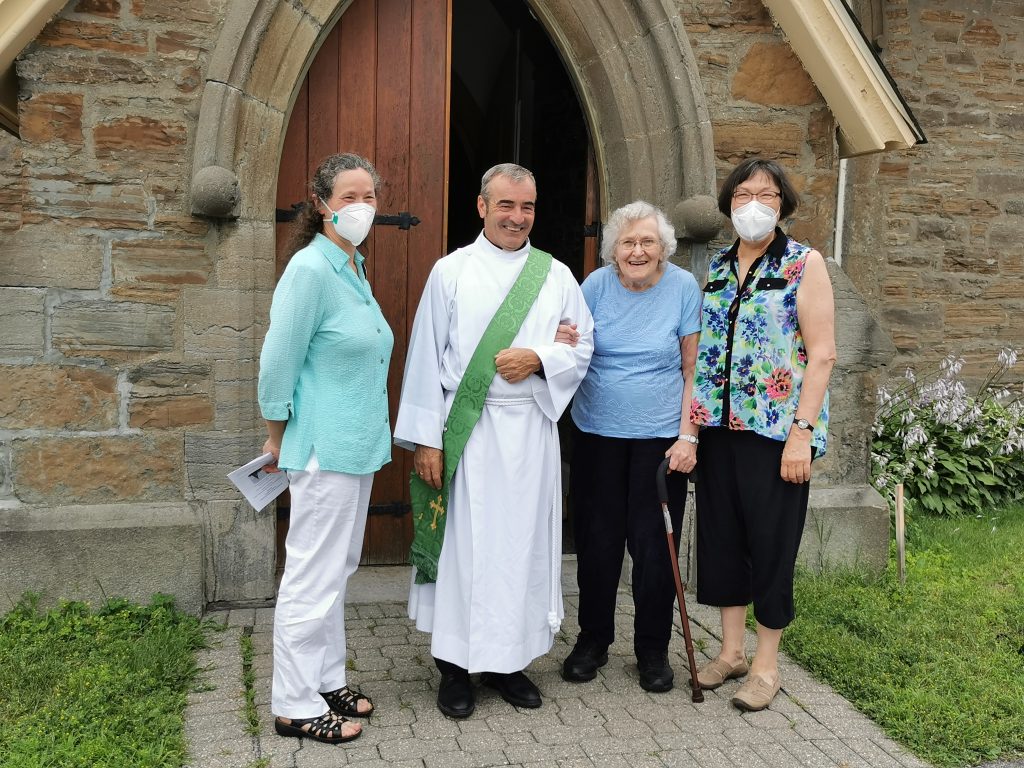 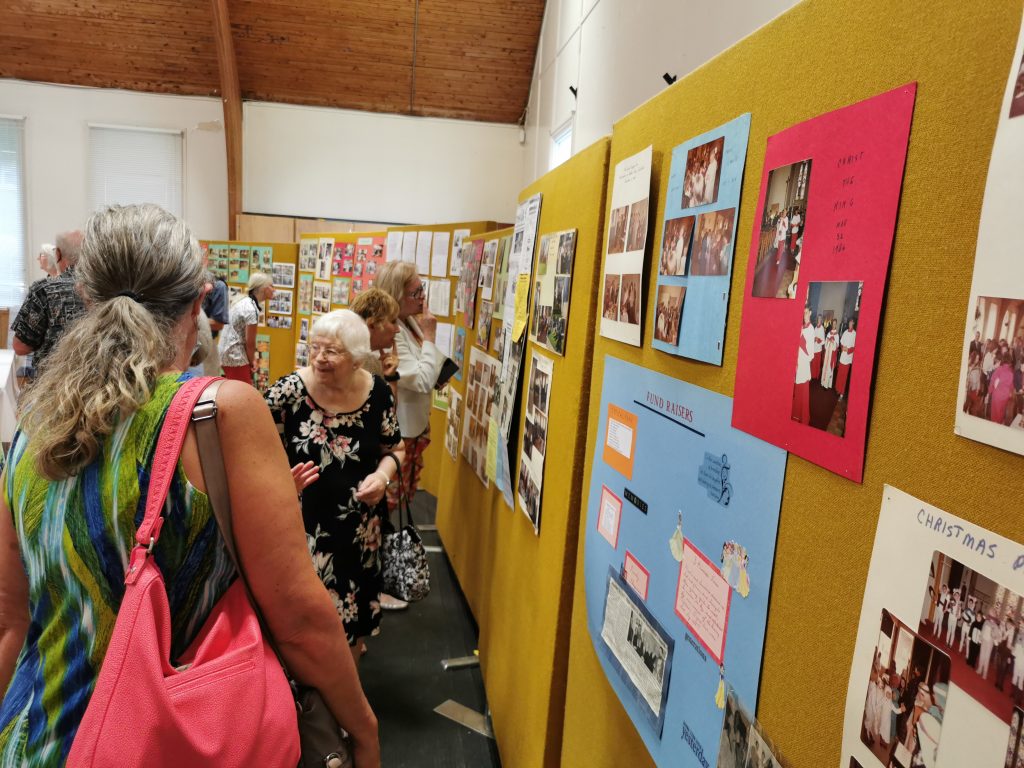 Photographs and items of interest from the church’s past, along with historical information, were part of a display set up in the church hall for parishioners to enjoy as part of an after-church luncheon. Photo: Louise Sproule