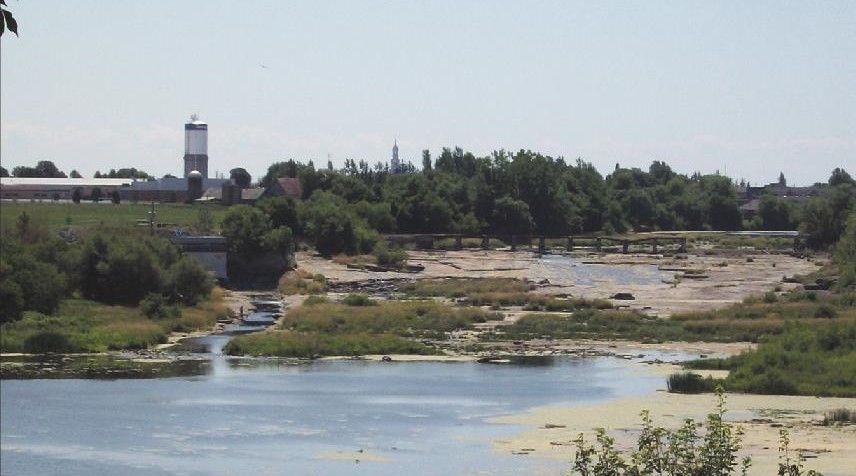 Water levels on the South Nation River in Casselman were less that 30 per cent of normal in 2012. Photo: Review Archives

Water levels less than 30 per cent of normal

The Review, September 12, 2012 – PRESCOTT-RUSSELL – Despite recent rain the South Nation Conservation’s (SNC) Response Team says the watershed remains in a Level 2 low water condition. Weather conditions have decreased stream flows throughout the watershed to less than 30 per cent of normal levels for this time of year. Dry wells have been reported by property owners. Thinning tree canopies and disconnected water streams have also been observed by residents and SNC staff.

The Review, September 17, 1997 – LEFAIVRE – The Ontario government is being urged to stifle a forestry firm’s conversion of large tracts of Alfred-Plantagenet Township farmland into tree plantations. Farmers fear their livelihoods will be sapped by Avenor Inc., a huge international forest products company which has bought 2,000 acres in Alfred and North Plantagenet Townships and has plans to buy more acreage in the area. “There are about 30,000 acres of agricultural land in Alfred Township and Avenor already has 10 to 15 per cent of that land,” says Alain Malette, a Lefaivre milk producer and cash crop operator, who fears Avenor’s trees will choke out existing farms, produce no economic benefits and create a multitude of problems.

The Review, September 13, 1972 – VANKLEEK HILL – Gordon Allen of Vankleek Hill won both Premier Breeder and Premier Exhibitor awards for the fourth year in succession as the Holstein breeders of Prescott County held their Black & White Show on Friday, September 1, at the Vankleek Hill Fair. J.H. and J.W. Cunning of Vankleek Hill stood second for the Premier Breeder honour and Horace Nixon, of L’Orignal was runner up for Premier Exhibitor. Allen’s first prize aged cow, Elm Lane Dynamo Peggy was also a four-time winner when she was named Senior and Grand Champion.

The Review, September 13, 1947 – CUSHING – The fire seen at a distance by Cushing residents, caused by Saturday night’s electrical storm, is reported to have been the house and barns of Trafford Little, a man well known in Cushing – his former home having been on the Ontario side of the Ottawa River from Cushing West. It is recalled a tragedy was enacted at his former home, before his parents owned it, when several of the Cook family were murdered there by an irate hired man.

The Review, September 22, 1922 – LACHUTE – That the Argenteuil Fair promises to be the best yet is evidenced from the fact that neighbouring counties are trying to wrest the laurels from our county breeders. Although new horse, cattle and sheep buildings have been erected, every available space has been taken.

The Review, September 10, 1897 – VANKLEEK HILL – The directors of the Country of Prescott Agricultural Society have added entertainment to be given on Wednesday evening. All the attractions given during the day will be repeated besides many specially secured for the concert. The stage and grand stage will be brilliantly illuminated and Barrett’s orchestra will furnish music.