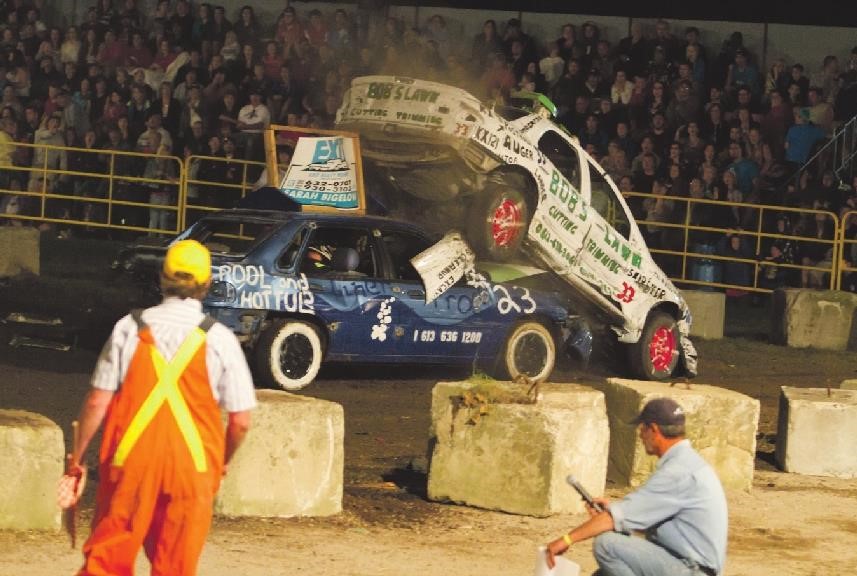 A car rides on top of another at the demolition derby during the 2012 Vankleek Hill Agricultural Fair. Photo: Review Archives

County Road 17 – Cross at your own risk

The Review, August 22, 2012 – L’ORIGNAL – Even public works staff exercise extreme caution when crossing Country Road 17 at its intersection with Cassburn Road. This is why Champlain Township is urging the United Counties of Prescott-Russell (UCPR) to install amber ‘prepare to stop’ lights on either side of the intersection to warn motorists of the impending red light ahead. There is a similar problem at the intersection of Country Road 17 and John Street and Mayor Gary Barton said amber ‘prepare to stop’ lights could be an asset there as well.

The Review, August 27, 1997 – VANKLEEK HILL – The Hawkesbury Ontario Provincial Police detachment offered a salute to good samaritan Ernie Roebuck, captain of the Vankleek Hill Fire Department. Roebuck used his personal vehicle to drive a family to Mirabel Airport after they were involved in a three-vehicle accident near Vankleek Hill recently. Investigating officer Constable John Amell also thanked Vankleek Hill Hydro and the fire department for their assistance at the scene.

The Review, August 30, 1972 – VANKLEEK HILL – Barry Mooney was declared top rider of the day and winner of the Annual Club Trophy at the Vankleek Hill 4-H Horse Club’s Achievement Day on Saturday, August 25. Diane Mode was the high point lady rider. Karen Mooney won a lovely trophy for the winner of the Western Pleasure class. A trophy donated by Gerald Mooney of Toronto was awarded to Douglas Cowan on winning the Barrel Race. The fourth trophy of the day went to Micheal Haughton, winner of the Flag class.

The Review, August 28, 1947 – HAWKESBURY – The Official Opening Day of the Hawkesbury Flying Club was held here on August 17, following the completion of the Webster Memorial Trophy Competition. A very large crowd gathered at the Hawkesbury Aerodrome to witness a spectacular show which included a glider exhibition and a parachute jump. About 25 aircraft visited the Hawkesbury airfield, being various types of light airplanes, including an amphibian, the first aircraft of this type to land at Hawkesbury.

The Review, August 25, 1922 – L’ORIGNAL – What might have been a serious accident occurred in L’Orignal on Sunday afternoon, when an auto driven at excessive speed completely turned over at Messrs. Schetagne’s corner and the five passengers were pinned under the car. Passers-bye were soon on the spot and after three managed to extricate themselves the other two were freed when the car was lifted. They were fortunately uninjured other than severe scratches and all able to return home the same day.

The Review, August 27, 1897 – VANKLEEK HILL – It is time the town authorities took action to officially stop the discharging of firearms within town limits. Last week a bullet broke a window in Mr. John Hunter’s residence. This is the second time the same thing has occurred and Mr. Hunter feels quite rightly that something should be done to stop the practice. Recently Rev. Father Duserre was sitting on his verandah and a bullet passed so near him that its music was startlingly distinct and caused the rev. gentleman to seek safety within his residence. Stop it.