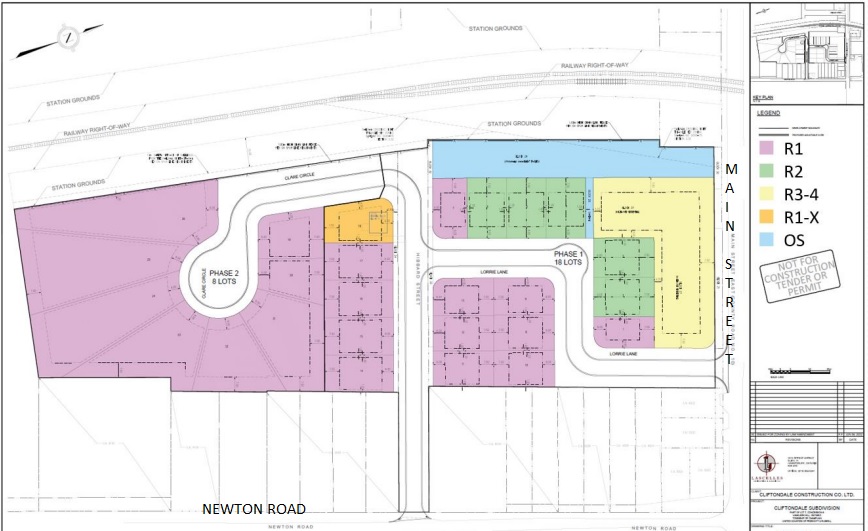 A Zoning By-law Amendment (ZBA) application is before Champlain Township Council for a new subdivision in the southeast corner of Vankleek Hill.

On August 11, a public meeting was held for the Cliftondale Subdivision. Council has already granted Draft Plan Approval for the project, but the ZBA is required for it to proceed. The ZBA would change the zoning on the land from the current R1 and R3-4 to R1, R1-7, R2, R3-4 and OS (Open Space). If approved, the ZBA would facilitate the construction of 20 single detached homes, 10 semi-detached homes, and a multi-unit dwelling block in two phases. The subdivision will also include space for stormwater management.

The location of the proposed subdivision is on the south side of Main Street, between the CN railway tracks and Newton Road. The subdivision will include Hibbard Street and add new streets, to be named Clare Circle and Lorrie Lane.

Consulting Planner Tyler Duval of J.L. Richards and Associates told council the proposal conforms to the Provincial Policy Statement on land use planning and is within permitted settlement area lands under the United Counties of Prescott and Russell Official Plan (OP). Duval said the area is designed for low density residential development under the Champlain Township OP.

During the public meeting, there were no questions or comments from the public in support of the ZBA. However, a resident of Newton Road did ask for clarification about if the development will result in the permanent closure of Hibbard Street at the railway tracks. Currently, Hibbard Street crosses the tracks and connects Newton Road to Main Street. No answer was immediately available to the question, but Director of Public Works Sebastien Levesque said he would inquire to find an answer.