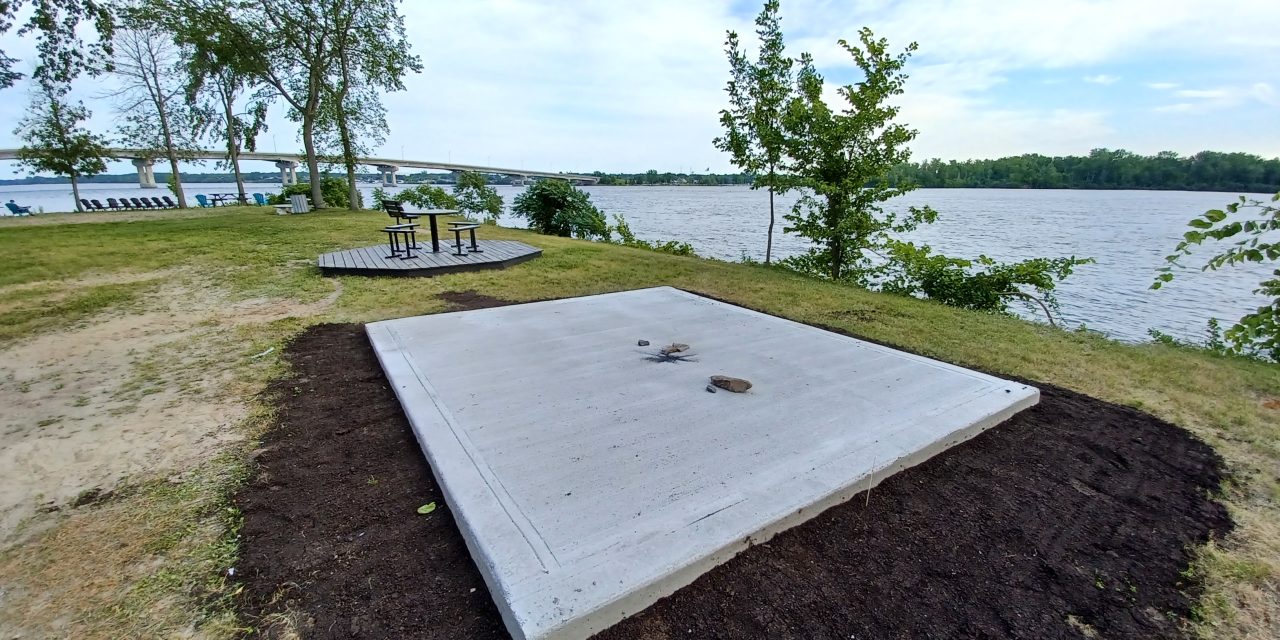 A gazebo formerly stood on the wooden platform with the table and chairs shown here in the park between the Ottawa River and canal in Grenville. However, the gazebo was destroyed in the severe storm on May 21. A concrete slab, also shown here, has been poured for a new shelter. It will be one of four shelters the village is purchasing for its parks and trails. Photo: James Morgan

Grenville village council met on July 4 and several decisions were made affecting infrastructure and public safety.

A roof was constructed over the outdoor rink at Parc Normand-Woodbury in Grenville in the spring of 2022, and hockey players using the rink will be able to enjoy it at night during the winter ahead.

On July 4, Grenville village council approved the purchase of a lighting system to be attached to the roof of the rink at a cost of $31,505, plus taxes.

The municipal garage on rue du Moulin in Grenville will be receiving a new roof this fall. Village council approved the $129,806.78 cost when it met on July 4.

The Village of Grenville did not receive any bids for a project to build an access ramp on the village office building. On July 4, council approved establishing a committee to divide the components of the project with the intent of attracting more interest from contractors to bid on various parts of the ramp construction.

Four new outdoor shelters for rest and relaxation will be added to parks and recreational paths in Grenville.

At the July 4 village council meeting, it was decided to purchase four wood post and beam shelters at a cost of $3,099.99 each. One of the new shelters will be located in the park between the canal and the Ottawa River, where a former gazebo shelter was destroyed during the severe storm that hit the village and surrounding region on May 21. A concrete slab foundation for the new shelter has already been poured.

The red, white and blue Crevier signage will disappear sometime soon from the gas station at the corner of rue Maple (Route 344) and rue Principale in Grenville, by the approach to the Long Sault Bridge.

In its place, a redesigned Ultramar gas station will open. The local planning committee has approved the design, but Grenville village Director General Alain Léveillé said there is no approximate date for when construction work will begin.