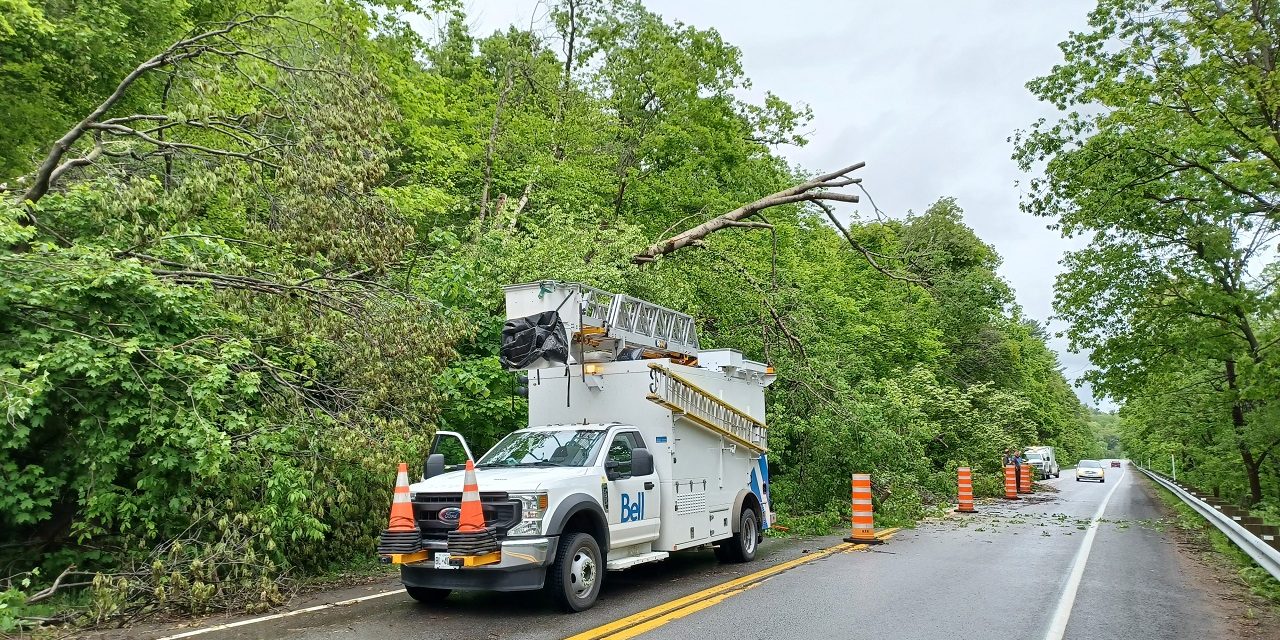 Fallen trees due to the May 21 storm caused the Bell telephone line along Route 148 between chemin Kilmar and Pointe-au-chêne to fall to the ground. This photo was taken on May 27. Photo: James Morgan

Due to widespread damage and continuing power outages from the storm on May 21, Grenville-sur-la-Rouge council held a special meeting on Friday, May 27 and extended the municipal state of emergency for another five days. The emergency was originally declared shortly after the storm hit the region six days earlier.

Mayor Tom Arnold said the worst damage was in the area of chemin Rawcliffe and Concession 6.

“It’s like a bomb went off on top of a whole valley,” Arnold said.

Trees along an entire forested hillside near where Autoroute 50 crosses Rivière Rouge were destroyed.

Arnold said that as of Friday evening, most of the municipality north of Autoroute 50 remained without electricity.

Hydro-Québec personnel and K-Line contract workers from New Brunswick remained on the job in Grenville-sur-la-Rouge into the weekend. On Friday, Route 148 remained closed between chemin Kilmar and chemin Avoca due to trees on the highway which had also caused power and telephone lines to fall to the ground. Municipal public works staff also continued the job of removing debris from roads. The municipality is hoping to receive financial assistance from the Québec government to help cover the cost of the cleanup.

As of Friday, the Avoca Community Centre was still open for residents without power, and the municipal administration building in Calumet remained open for residents requiring drinking water or to charge mobile phones. Arnold said municipal staff, firefighters, and citizens have all come together to help.

Lachute had mostly recovered from the storm by May 27. Mayor Bernard Bigras-Denis said the situation was stable and power remained out on just one street in the urban area, and in the area of Dunany and Lac Sir John. After the storm hit, the urban area of Lachute west of Rivière du Nord was where damage was the worst, according to Bigras-Denis.

According to Bigras-Denis, the Centre d’entraide d’Argenteuil distributed food baskets to vulnerable residents in the Ayersville neighbourhood.

Bigras-Denis said after the storm, municipal staff and firefighters immediately got to work on clearing roads and assisting municipalities such as Wentworth and Harrington where there was extensive damage. 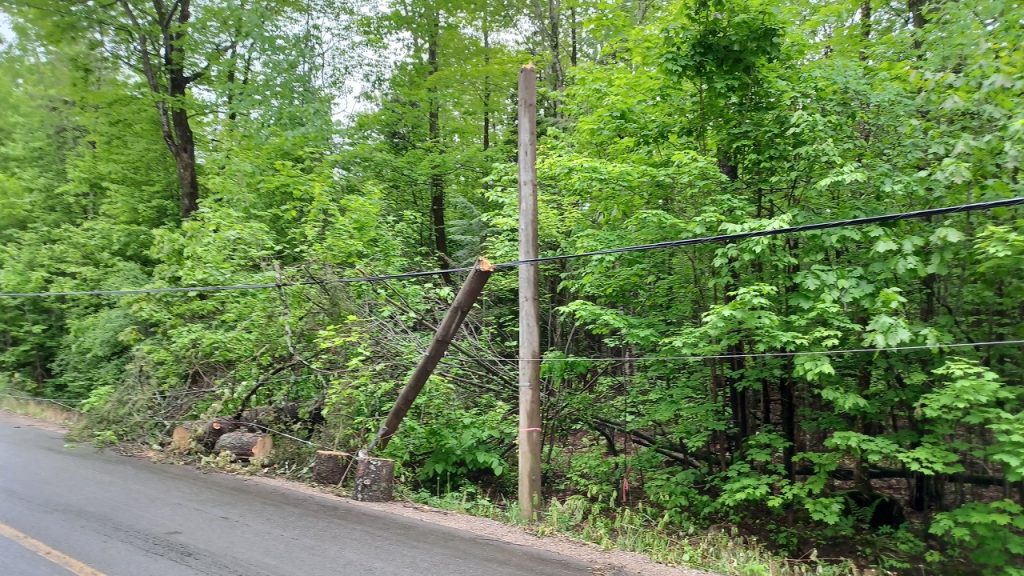 Power lines along chemin Rawcliffe in Grenville-sur-la-Rouge remained damaged on May 27, six days after the storm caused considerable destruction in the area. Photo: James Morgan