Long recovery in Clarence-Rockland, one week after storm 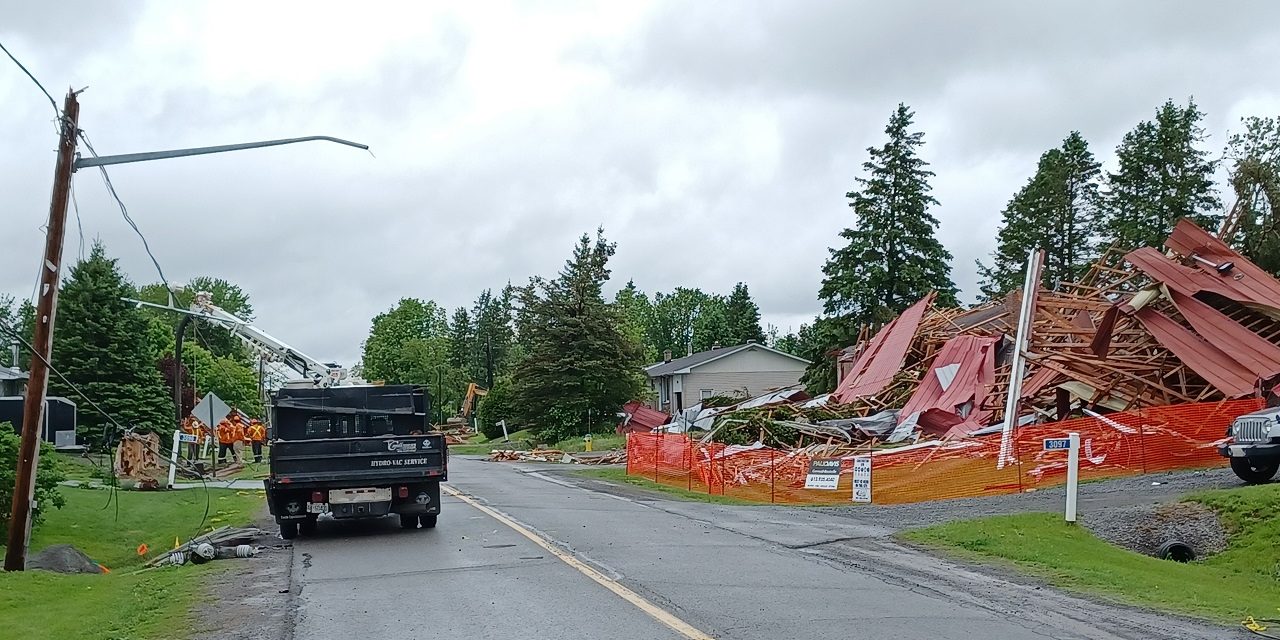 Extensive storm damage on Gagné Road in Hammond on May 27, one week after the violent storm hit the area. Photo: James Morgan

One week after a violent wind and thunderstorm left a trail of damage across Eastern Ontario and Western Québec, considerable damage and power outages remained, particularly in Clarence-Rockland.

On Friday, May 27, Clarence-Rockland Mayor said more than 200 poles across the city’s territory were down as a result of the storm. Municipal crews were also constantly working on cleaning up debris.

In addition to Hydro One crews from across Ontario, 50 trucks from powerline contractor K-Line in Fredericton New Brunswick were in Clarence-Rockland helping to rebuild lines and restore power to customers. Zanth said the travelling crew from New Brunswick had come straight from another job in Timmins. He met up with them at a local restaurant when they arrived in Clarence-Rockland.

“I went over there with the CAO to thank them for their work,” Zanth said.

The Canadian Red Cross did briefly set up an emergency shelter with overnight accommodation for residents at the Clarence Creek Community Centre. However, no residents were staying overnight so the Red Cross discontinued the service. 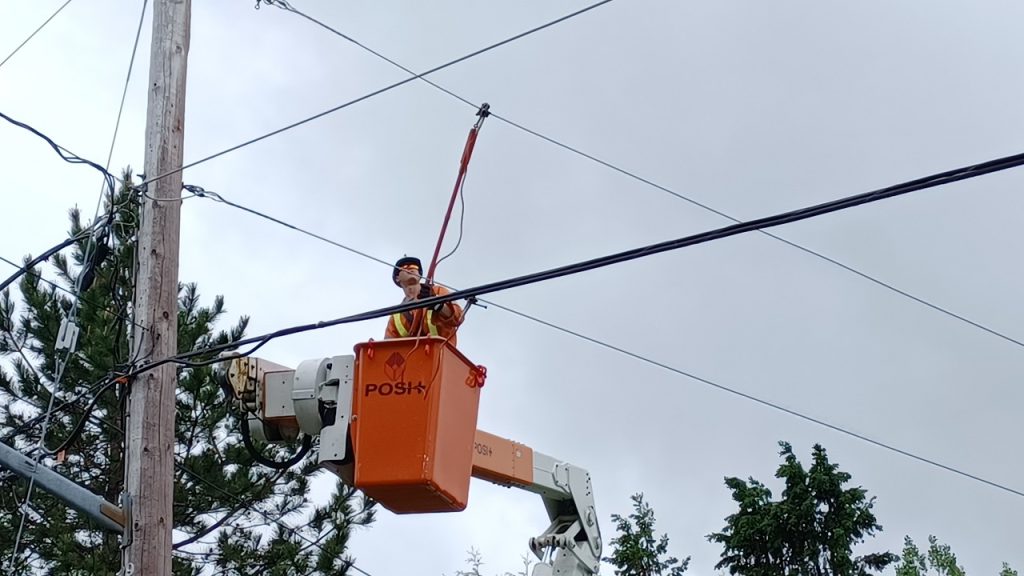 A Hydro One-line worker using a live line “hot stick” along Gagné Road in Hammond on May 27. Photo: James Morgan

Hammond and St-Pascal-Baylon were among the areas of Clarence-Rockland hardest hit by the storm.

“The houses have been completely decimated,” said Zanth.

On Friday, Hydro One crews were working along Gagné Road in the northern part of Hammond, and the New Brunswick crew was working along Gendron Road (County Road 21) south of the village. Some buildings were completely destroyed while others had moderate to severe damage. 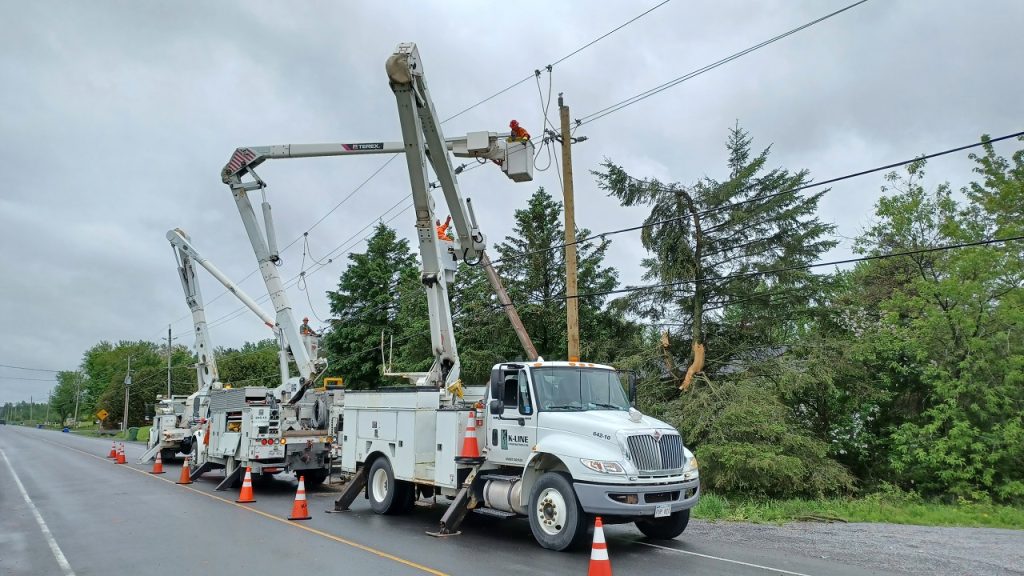 Line workers from Fredericton, New Brunswick rebuilding a power line damaged by the May 21 storm on Gendron Road in Hammond on May 27. Photo: James Morgan

Zanth is hopeful the Ontario government will assist Clarence-Rockland with the cost of storm-related cleanup and repairs. However, Zanth said the city’s calls to both the Office of the Premier and the Office of the Minister of Municipal Affairs and Housing had not been answered. Zanth said a formal letter requesting provincial assistance was being sent on May 27.

A State of Emergency was also declared by the city soon after the storm hit on May 21. The declaration allows for union rules to be suspended so city employees may be transferred to work in other departments where their help is most in need.

“Our employees have been absolutely spectacular,” Zanth said of city workers.

A 24-hour emergency command centre was set up at the Rockland fire station.

“We have not stopped,” said Zanth.

Due to the extent of the storm damage and its prolonged effects, Zanth said the city could re-examine its resiliency and response to natural disasters.

“This is the third natural disaster in our city in five years,” he remarked.

Clarence-Rockland was also affected by severe flooding along the Ottawa River in 2017 and 2019. Zanth said a conversation is needed about policies and building codes, especially since climate change could increase the frequency of natural disasters.He also commented that grocery stores and gas stations could be required to have generators so they can keep serving residents when the power is off in the rest of the city.

The May 21 storm followed travelled in a northeasterly direction. In Alfred and Plantagenet, efforts to restore power to areas of the municipality continued during the weekend. Unfortunately, a power transformer in Plantagenet blew on Saturday morning, again leaving many residents without electricity. No definite date had been set for returning power to the rural areas but Hydro One was hoping it would be at the beginning of the week. Shower facilities at École secondaire catholique Plantagenet were made available for residents.

In La Nation, residents in the north-central part of the municipality were most affected by storm damage.

“We got hit around Riceville and Pendleton,” said Mayor François St-Amour.

In Champlain Township, the situation was less serious one week after the storm.

“Things are getting back to normal,” Mayor Normand Riopel said.

The township received special permission to open the landfill site and allow residents to bring debris and waste resulting from the storm.

Riopel said there was a lot of tree damage, but work continues to clean it up.

“Champlain crews are doing their best to clean up the roads,” he said.

Cleanup of tree damage continues in the Town of Hawkesbury, and municipal workers are conducting a thorough removal of debris from all streets.