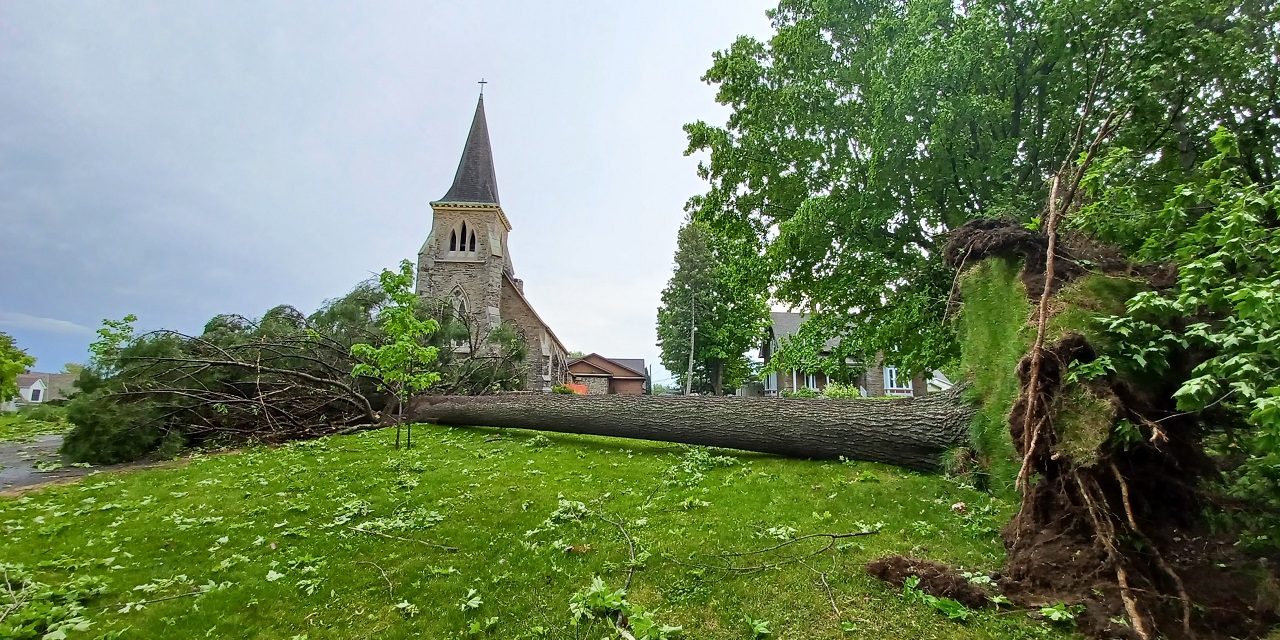 A big white pine fell during the storm on May 21 and narrowly missed the historic Holy Trinity Anglican Church building on McGill Street in Hawkesbury. Photo: James Morgan

The usual May long weekend fun blew away quickly late in the afternoon of Saturday, May 21 when an extremely severe thunderstorm hit Prescott and Russell and Argenteuil between 4 p.m. and 5 p.m.

From Clarence-Rockland in the west to Lachute in the east, there were fallen trees, power lines, and extensive damage to buildings. The bell towers and spires were severed from historic churches in Sarsfield and Fassett, and a giant white pine tree fell in Hawkesbury, narrowly missing the historic Holy Trinity Anglican Church.

In Grenville, where the electricity went off just before 4:30 p.m., there were many trees and branches down throughout the village. Village firefighters were out with chainsaws, helping property owners remove hazardous trees and diverting traffic around hazards. Deck furniture from balconies at the Habitations 55 condominium complex was strewn about the yard. 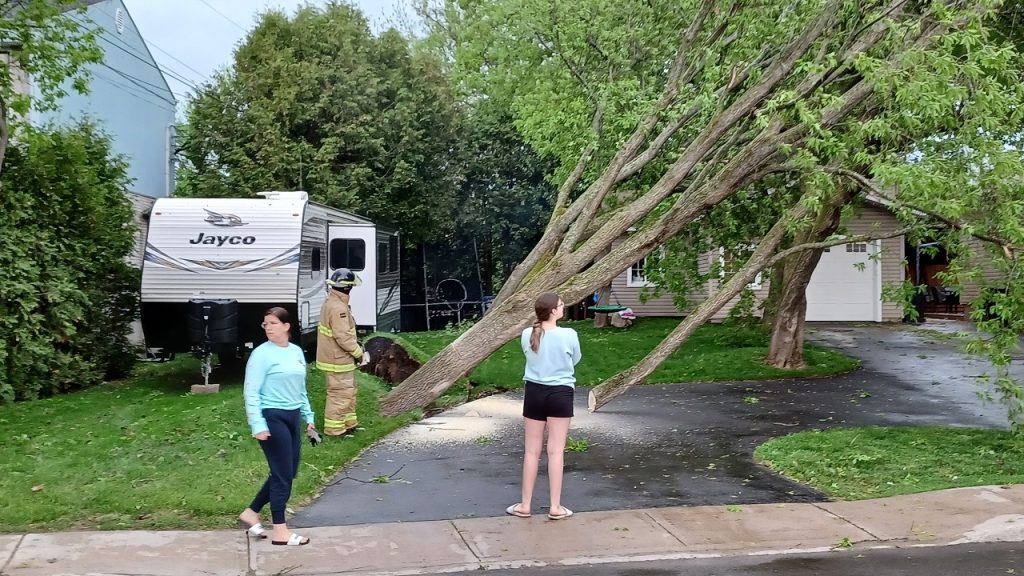 Fallen tree damage along rue Principale in Grenville following the storm on May 21. Photo: James Morgan

At Confederation Park on Chenail Island in Hawkesbury, several trees were uprooted and the outdoor art exhibit beside the cultural centre was destroyed. The Welcome to Ontario signage beside John Street laid flat on the ground. Most of the traffic lights at the corner of John Street and Chenail Boulevard were torn from their poles and smashed on the pavement. 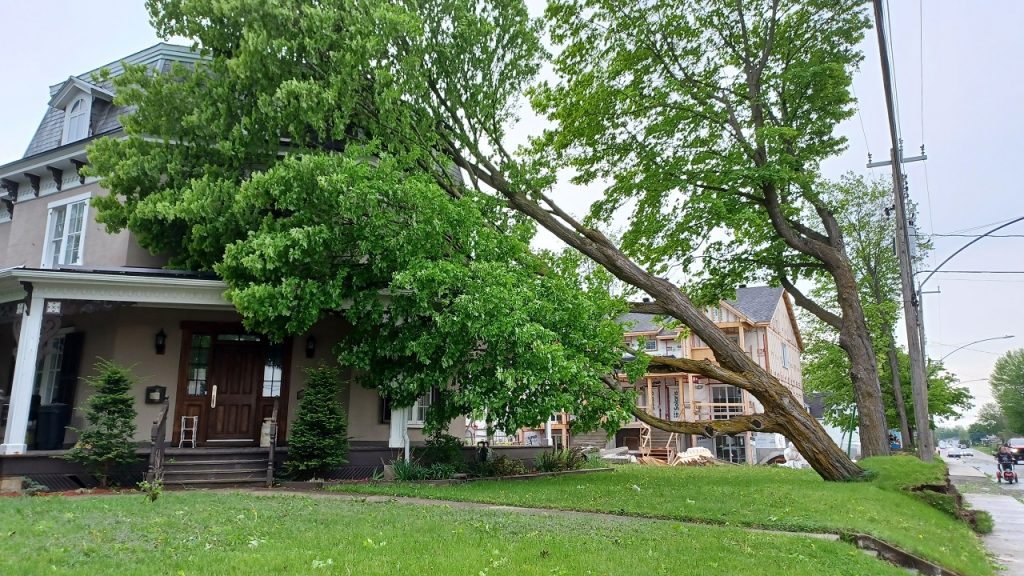 In residential neighbourhoods of Hawkesbury, many trees were uprooted, shingles were stripped from roofs and laid all over streets and lawns. Many homeowners and neighbours instantly got to work trying to reattach shingles or covering the exposed boards with tarpaulins to protect their homes from rain damage. Similar damage from trees occurred in Vankleek Hill and L’Orignal. 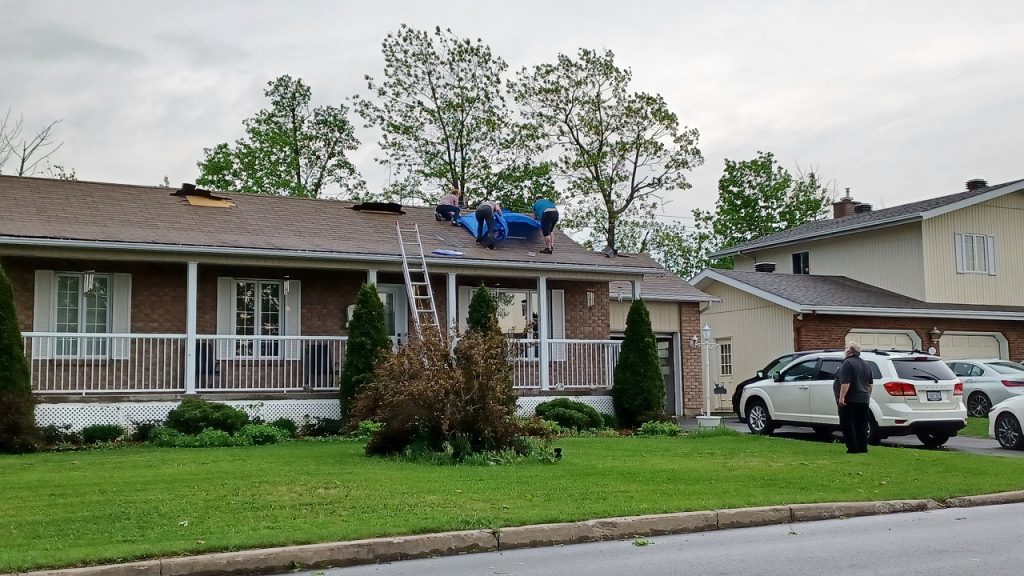 Roofs throughout the region were heavily damaged by the storm on May 21. Shingles were strewn about many streets and yards. Some people got to work right away making repairs or putting tarps in place to protect their homes from further rain. This group of people at a house on Edmond Street in Hawkesbury were hammering shingles back on or laying tarps to protect the plywood underneath. Photo: James Morgan

In Lachute, power was lost in the entire town, but tree damage appeared to be less severe, except for at the golf course and in front of Laurentian Regional High School. The IGA supermarket on avenue Bethany has a generator and was one of the few stores in town open. In the hours following the storm, it was crowded with customers looking for food that could be prepared without cooking. Many people were stocking up on potato chips and beer. One customer said she helped remove seven trees from local roads when she drove into Lachute from Wentworth.

Power was restored in Vankleek Hill early in the day on Sunday. Both gas stations in Vankleek Hill, and one gas station in Hawkesbury were open. There were long lines of cars along the streets in front of each station from people waiting to fill tanks or gas cans for generators at home. 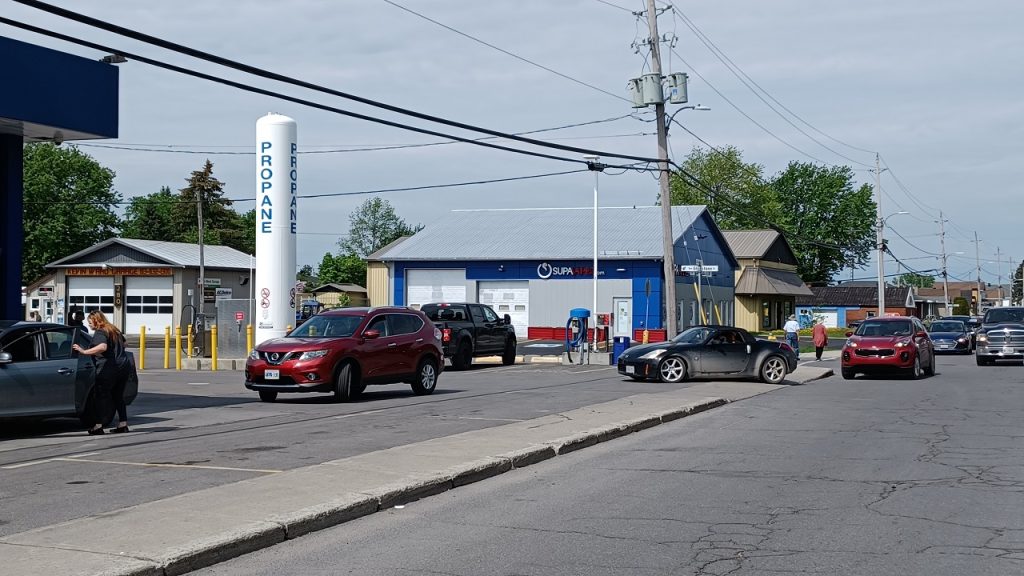 The Crevier gas station on Main Street East in Hawkesbury was one of the few places open on Sunday, May 22. There was a long line of cars on the street of drivers waiting to fill up. Photo: James Morgan

At one point, Hydro Hawkesbury projected power to return in town late Sunday evening, but restoration was delayed to Monday. Tree removal work is still required in the area of Ghislain, Stevens, Jerome, Thorne, and Smerdon streets.

For continued, reliable, official updates on power outages, Hydro One customers in Ontario may always check stormcentre.hydroone.com . Hydro 2000, the municipal utility in the village of Alfred, also receives power from Hydro One. Therefore, the Hydro One website is also the reliable source of outage information for Alfred residents. All customers of Hydro-Québec may check the status of outages at:

In the Town of Hawkesbury, municipal employees were working all day on Sunday and Monday removing debris from streets. Residents without power or water were able to go to the Robert Hartley Sports Complex to use the showers, obtain drinking water, and recharge electronic devices. 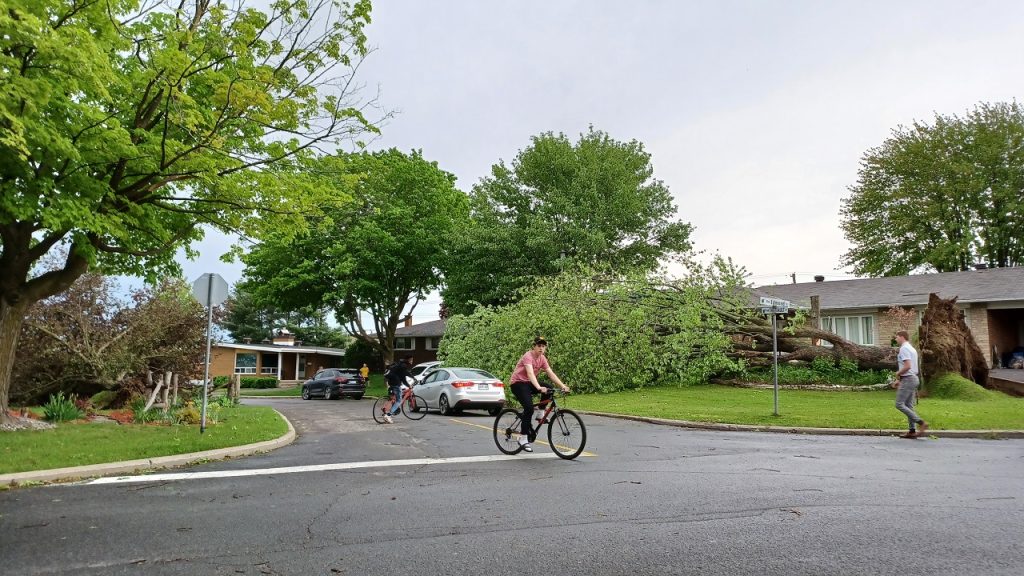 There was considerable damage to properties at the intersection of Edmond and Thériault Streets in the Mont-Roc neighbourhood of Hawkesbury from Saturday’s storm. Photo: James Morgan

Alfred and Plantagenet Township was allowing residents to place two extra bags of garbage and food waste by the roadside on Tuesday, May 24 to assist residents who have had to throw away spoiled food from freezers and refrigerators. Dumpsters were also placed outside the township office building in Plantagenet and at the Lucien-Delorme Community Centre in Wendover for the day on May 24.

In Grenville-sur-la-Rouge, a municipal state of emergency was declared. The municipal office building in Calumet was open for residents to use to obtain water, use the wifi signal, and recharge mobile phones.

In Lachute, showers and charging facilities were made available for all residents of the MRC d’Argenteuil at Aréna Kevin-Lowe—Pierre-Pagé and at the municipal swimming pool. The Lachute Public Works Department is organizing a special collection towards the end of the week to pick up branches and plant debris. However, no cutting will be done on private land. The branches must be deposited at the edge of the road, on your property, in a compact package for collection.

For Lachute residents needing water, a filling station was installed at the municipal garage at 507 rue Catherine.

In Clarence-Rockland, the city declared a municipal State of Emergency following the storm. The municipal landfill site on Lalonde Road in Bourget was open for extra hours on Tuesday and Wednesday for people wanting to get rid of branches, stumps and trees.

An emergency shelter was opened at the Clarence Creek Arena for residents to recharge devices, take a shower, get drinking water or rest.

The United Counties of Prescott and Russell administrative office in L’Orignal was closed on Tuesday, May 24.

The storm caused an extended long weekend for many local students. All schools in the Conseil scolaire de district catholique de l’Est ontarien (CSDCEO) were closed on Tuesday, May 24. The CSDCEO administration office in L’Orignal was also closed.

École Bouchard in Brownsburg École l’Oasis in Lachute were also closed on Tuesday.