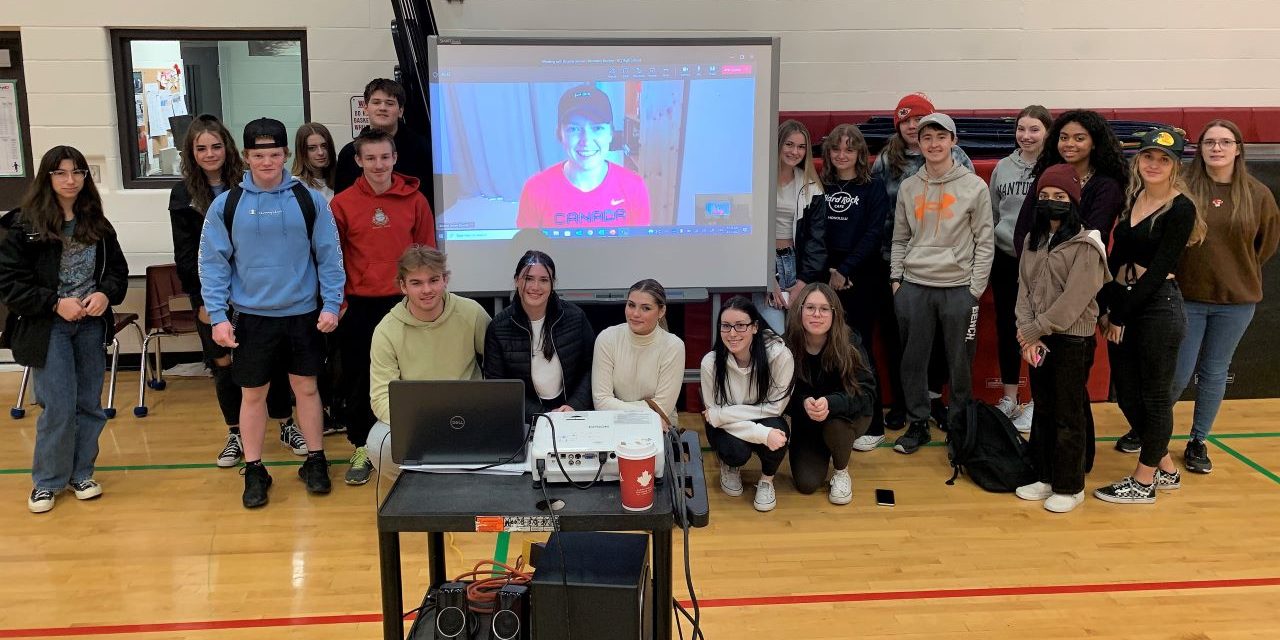 On Wednesday April 27, my class at Vankleek Hill Collegite Institute (VCI) was lucky enough to have another Olympic gold-medalist speak to them. Brianne Jenner – a two-time gold medalist – talked to students about her journey to the Olympics, mental health, her successes, and disappointments, her project with the new professional league, and the reasons she thinks this Canadian national women’s hockey team was so successful at the Olympics this year.

Jenner began by explaining to the students how she prioritized school from an early age. She spent countless hours on her game while she was in high school, but her goal was always to obtain a scholarship. She said that boys usually have a dream to play in the NHL but unfortunately, girls don’t always have that same dream or opportunity. This is something that Jenner is trying to change.

Lucky enough to have a few offers from NCAA Division 1 schools, Brianne decided to go to Cornell University, after a campus visit and conversation with the hockey coach. She said that this is where she really needed to develop some better time management skills. Balancing a hockey schedule with the workload and expectations of an Ivy school was not something that you can just breeze through. She explained to students that these are the type of skills that they should be working on now. Developing these types of habits now can become lifelong skills.

At Cornell, Jenner formed very strong friendships with many people. She credits the facts that team sports do that to most people who play them. She talked to students about the importance of communication in anything you do. Whether it’s school, work, sports, or any other extra-curricular activity, having good communication is an absolute must.

The two-time Olympic gold medalist credits having such a good Olympic tournament on the fact that the team’s culture has really changed over the last few years and said communication was one skill that made a huge difference. She also talked about the lack of hierarchy among new players and veterans, which made an enormous difference in allowing younger players to feel welcome and comfortable within the team.

Equality was also very important to the team concept. Younger players were given great responsibilities which allowed them to shine. Brianne said they needed to try something new after earning only a silver medal in 2018. They had five newcomers on defense which meant that if they were not comfortable within the team, their chances of being successful would greatly decrease.

Jenner also credited the increased amount of funding that the national team was able to get that now allowed them to spend more time training and more time practicing mental skills, such as visualization and being ready for any challenge. She referenced the games at the 2022 Olympics, where everyone needed to play with masks on. She said that because of their preparation, no one was bothered or rattled by the fact that they were in this situation. She made another parallel here about how students need to be able to develop this type of skill and that it doesn’t always need to be done professionally.

Jenner concluded by explaining to students the project that she, along with a few other women, are currently working on. She said that there was no good reason that this country (and the United States) could not have a professional women’s hockey league, just like the men. She was very optimistic that the project will take off and that we should be able to see the best women from around the world come to Canada and the United States to play in the new league. This would certainly allow the sport to grow, and more players to develop and showcase their skills. It would also give young women something to dream about.

Of course, Jenner’s path was not always easy. She talked about the struggles and the disappointment to being the last player cut after being centralized for the Olympics in 2010. She said that she was only 18 and that this was something that she used as a learning experience. She credits her strong support system of family and friends for this. She was able to grow as a professional and use this as a learning experience and motivation tool. She did not get upset, blame others, or herself for this, but just took it as a growing and learning experience.

Brianne believes that the whole experience made her a better player today by allowing her to deal with disappointment properly and developing a strong character. It also made her realize that this was really something that she wanted badly and would continue to work very hard towards. That disappointment is often something that can be developed at a younger age. She talked about students getting cut from high school teams or not getting the desired mark on a test or exam. She continued by circling back to the development of certain life-skills as an adolescent. These types of disappointments are inevitable as you go through life so developing the abilities to deal with them properly at a young age is extremely important.

Throughout the conversation, students got to ask Jenner questions, which varied from her SAT scores to her thoughts about the new lululemon clothing line for the Olympics. Brianne is a wonderful role model who should be regarded as a pioneer (along with others) in the development of women’s hockey in Canada. VCI students said they felt lucky to get the opportunity to speak with her.