Hawks look to win first CCHL title in 16 years, as they face off against Ottawa in finals 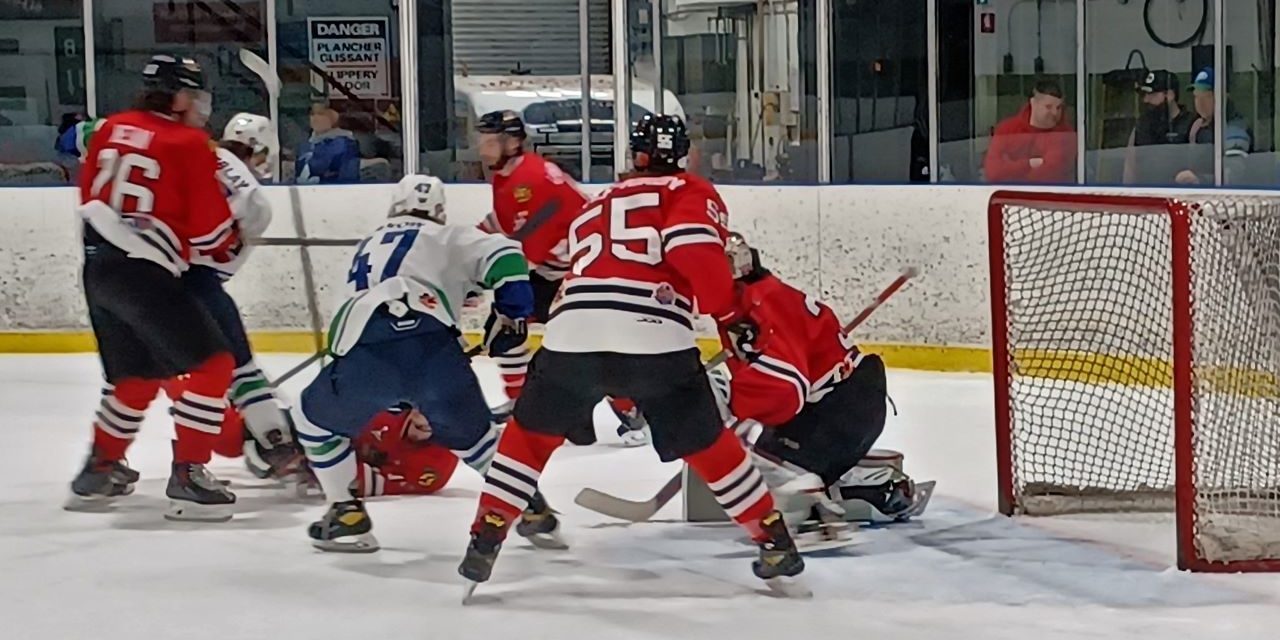 After the first three games were settled by just a goal, the Hawks took control of the semi-final series with the Braves by outscoring Brockville 11-3 over the final two games to take the series four games to one and move onto the CCHL finals. Photo: Reid Masson

The Hawkesbury Hawks will face off against the Ottawa Junior Senators in the Central Canada Hockey League (CCHL) finals, beginning this Thursday, May 5.

The Hawks, who finished in second place overall in the CCHL, booked their tickets to the finals with a convincing 5-1 win over the Brockville Braves at the Robert Hartley Sports Complex on Saturday night (Saturday, April 30) to take the series in five games. The Junior Senators – the top seed in the playoffs and sixth-ranked team in the country – also wrapped up their series the same night, with a 4-0 shutout of the Renfrew Wolves.

The series will kick off this Thursday, May 5, with the Junior Senators hosting Hawkesbury at the Jim Durrell Complex in a 7:30 p.m. start. Game 2 will go in Hawkesbury on Friday, May 6, with a 7:30 p.m. puck drop at the Robert Hartley Sports Complex.

Hawks head coach Rick Dorval said his team is prepared for a tough series against the talented Junior Senators squad.

“We’ve got some work to do,” Dorval commented on Monday (May 2), before the Hawks’ scheduled morning practice. “We’re excited about the opportunity.”

Hawkesbury began the 2021-2022 CCHL campaign with three straight losses, but key additions turned the team’s record around and the Hawks and Junior Senators were the cream of the crop of the CCHL by season’s end. The Hawks head coach said the additions were key to the organization’s goal of winning its first CCHL championship in 16 years.

“(The championship) was a goal of ours once the deadline acquisitions were made and now that we’re here we’re going to try to bring it home,” Dorval said.

The Hawks have had good fan support throughout the playoffs, but the team is hoping to see the Robert Hartley Sports Complex arena packed to the rafters for Hawkesbury’s home games in the CCHL finals.

“We’re hoping that the fan support will just continue to grow,” Dorval said. “I remember playing in Hawkesbury in the playoffs 20 some years ago and it was standing room only. I’m hoping for the same.”

“It’s a good way for the community to get together and support something local. We’re hoping it will be jammed.”

The Hawks were challenged in the first round by the Navan Grads, finally winning the series in six games – four of which went to overtime. After the first three games were settled by just a goal, the Hawks took control of the semi-final series with the Braves by outscoring Brockville 11-3 over the final two games. Below is a summary of the final two games of the semi-final series.