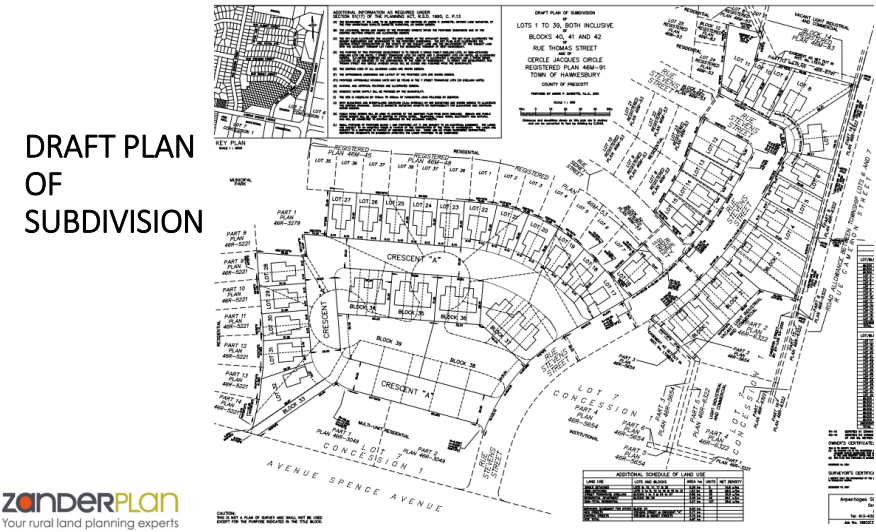 Drawing of the proposed Plan of Subdivision for the Gateway to Mont-Roc subdivision in Hawkesbury. Drawing from presentation by Tracy Zander to Hawkesbury council.

A change of plans for a proposed residential subdivision in Hawkesbury has lead to questions from nearby residents.

The developer of the Gateway to Mont-Roc Subdivision – which is to include extensions of Sidney and Stevens streets, and a new street called Mont-Roc Crescent, connecting to Spence Avenue – is to be built on land between Edmond and Cameron streets. The original Plan of Subdivision was for only single-detached houses, however the new plan would allow for increased building density on the 10-acre site, ,including single- detached dwellings, 48 semi-detached units, 30 townhouse units, and two blocks for 44 apartment units – a total of 127 new dwellings.

A public meeting was held on the proposed changes on March 28.

“What he would like to do is bring a broader range of housing types and units to your community,” said Planner Tracy Zander, who represents the developer.

If the changes are approved by the UCPR, further zoning changes would be required to accommodate the increased density. Construction of the subdivision is to take place in two phases.

“When is the phase one and phase two? Hawkesbury Councillor Lawrence Bogue asked. “How long is there in between (each phase)?”

“I think my client would like to get in the ground as soon as he can,” Zander replied.

Two residents of nearby Royal Avenue expressed concern about the proposal. They are uncertain about high-density development next to an established single-family neighbourhood and believe Hawkesbury already has a balance of housing types. They also questioned if all nearby residents are aware of the proposal.

UCPR Planner Dominique Lefebvre said notices were sent to residents within the required 120-metre distance from the property and a notice was also posted as required Spence Avenue.

Sidney Street resident Vanessa Higginson is concerned about increased traffic and an alleged inadequate notice to the public about the proposed development.

“It’s quiet, we don’t have any traffic,” Higginson said, of current traffic on Sidney Street.

Mayor Paula Assaly said there is already a mostly semi-detached subdivision in the area near Tupper Street and described it as a nice neighborhood.

Hawkesbury municipal planner Céleste Cordonnier noted all housing types are needed across Ontario, including in Hawkesbury.

“I think you’re going to see similar architecture to what you already have in the community,” Zander said in response to the concerns.

“I would be surprised if your community doesn’t have a demand for that,” Zander remarked.

Lefebvre said additional notices from the UCPR about the proposal would be added in upcoming weeks on other area streets, so more residents will be aware and able to provide comments.

If the Plan of Subdivision is approved by the UCPR, the public may appeal the decision during the following 20 days.