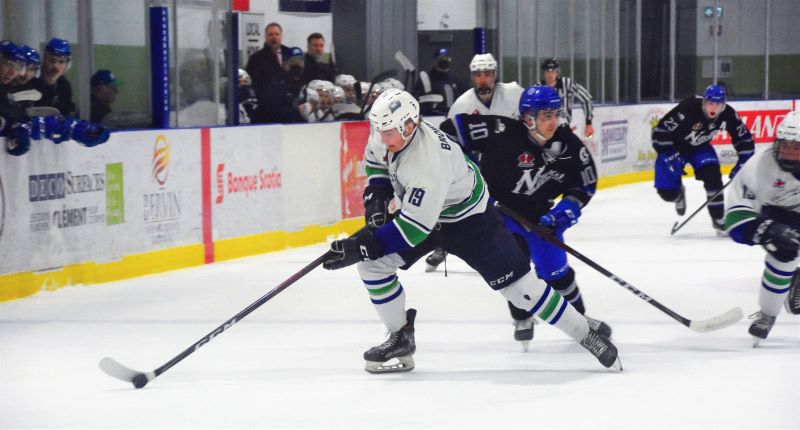 The Hawkesbury Hawks stayed on the winning track with two wins last weekend, including an exciting 3-2 shootout win over the Navan Grads at home and a 6-2 road win over the Carleton Place Canadians. 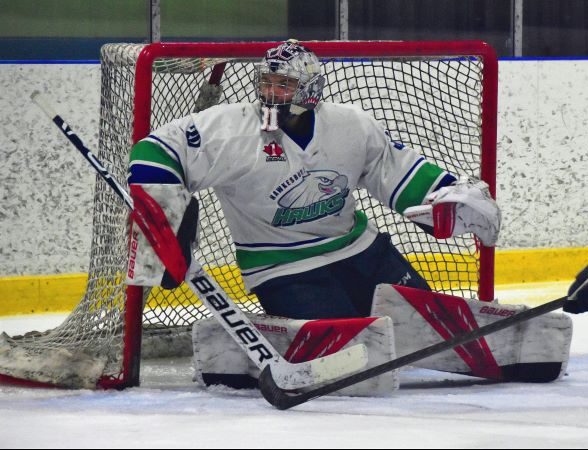 Goaltender Matthew Tovell earned the win in both of Hawkesbury’s games last week and was named first star in the team’s shootout win over Navan. Photo: Sylvain Lauwers

Defenceman Mark Cooper ignited a Hawks four-goal outburst in the second period, as Hawkesbury overcame an early 2-0 deficit to storm back and beat the Carleton Place Canadians 6-2 on the road on Sunday, March 27.

Cooper scored at 8:34 of the second to trigger the comeback, with Jakson Kirk tying the game just over a minute later.

Just 39 seconds after Kirk’s goal, Cooper again found the back of the net to score his 10th of the season and give the Hawks their first lead of the game. Rylee Hlusiak added a late goal in the final minute of the period to send the Hawks into the third frame with a 4-3 lead. Jeremy Quesnel and Kerfalla Touré – with his 21st of the season – sealed the game for the Hawks by scoring in the third.

Cooper was named the game’s first star, while Kirk, with a goal and two assists, picked up the second star for Hawkesbury. Matthew Tovell stopped 22 shots for the win, as Hawkesbury outshot Carleton Place 34-24. 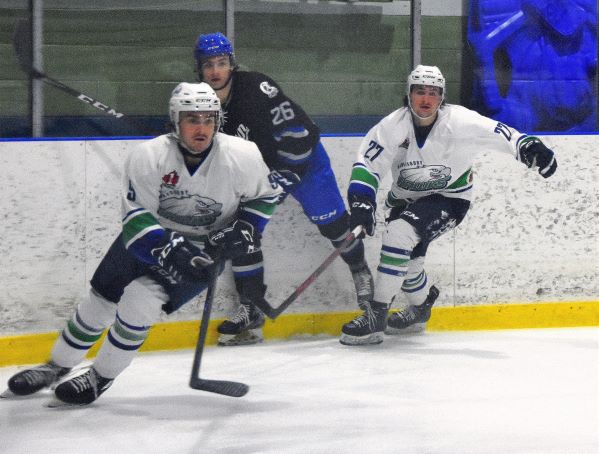 Rylee Hlusiak (9) and Thomas Cusson (27) against Navan. Cusson (27) had a goal and scored the winner in a shootout, as Hawkesbury beat Navan 3-2. Photo: Sylvain Lauwers

Goaltender Matthew Tovell was the hero for the Hawks at home on Friday, March 25, stopping 38 of 40 shots, and stoning Navan’s top scorers in the shootout, as Hawkesbury beat the Grads 3-2.

Thomas Cusson sealed the game away with a shootout goal winner, after William Gendron scored on the Hawks first attempt and Tovell stymied the Grads’ first two shootout attempts. Tovell and Cusson were named the game’s first two stars.

Forward Landon Brownlee got the Hawks a 1-0 lead with a goal at 16:33 of the first, before the Grads came back with two goals in the second to take a 2-1 lead into the final frame. Cusson tied the game at 14:48 in the third to set up his shootout goal for the win. Hawkesbury was outshot 40-38 by the Grads on the night.

The Hawks are in Ottawa on Wednesday, March 30 to face the league leading Ottawa Junior Senators, who have wrapped up first place in the CCHL’s Yzerman Division and in the league’s overall standings. The Hawks, who trail Ottawa by nine points, sit in second overall in the division and the league with a record of 35-11-5. Hawkesbury can clinch second overall with one more win in the four games the team has remaining.

On Friday, April 1, the Hawkesbury will be back home at the Robert Hartley Sports Complex to face the Nepean Raiders. Game time is 7:30 p.m. 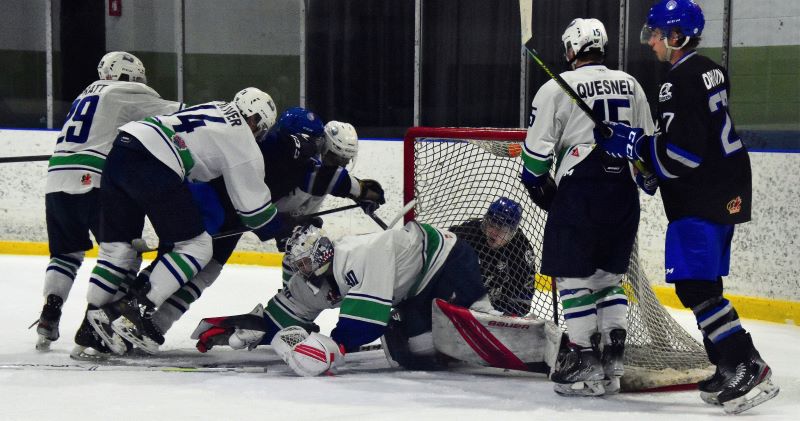 Hawks forward Rylee Hlusiak, who leads the team in scoring, just misses on an attempt against the Grads. Photo: Sylvain Lauwers