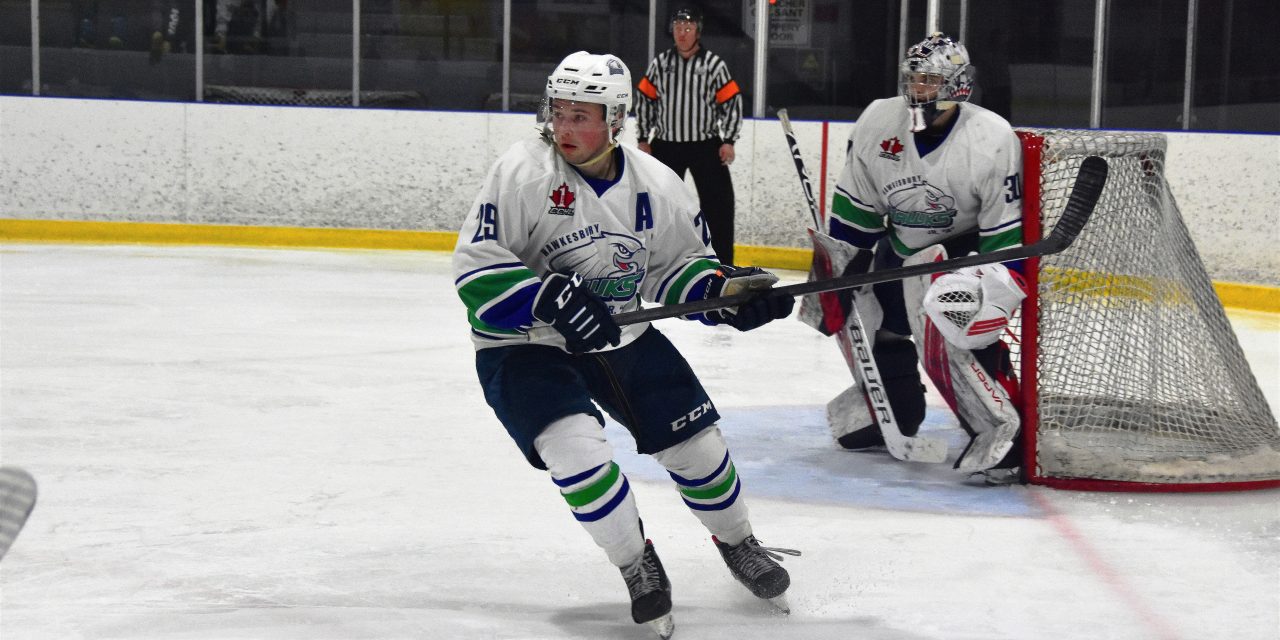 Hawkesbury forward Josh Spratt (29) was named the game’s first star, while goaltender Matthew Tovell (30) was the second star in the Hawks 5-1 win over the Brockville Braves on Friday, February 25. Spratt had a goal and an assist in the contest, while Tovell stopped 29 of 30 Brockville shots for the win. Photo: Sylvain Lauwers

The Hawkesbury Hawks extended their winning streak to 10 games with both home and road wins last week.

Jakson Kirk scored the winner with just over a minute left in the third period, as the Hawks topped the Kemptville 73s 4-3 in a road game on Sunday afternoon (February 27).

Thomas Cusson, Curtis Sturgeon and William Gendron also scored for Hawkesbury, who led 3-2 before Kemptville tied the game up by scoring with just under four minutes left in the third period. Dimitri Pelokos stopped 18 of 21 shots to earn the victory, as Hawkesbury outshot the 73s 31-21.

Sunday’s win followed a 5-1 victory over the Brockville Braves on Friday, February 25, in front of the Hawks’ home crowd at the Robert Hartley Sport Complex. Cusson, Kirk, Jeremy Tremblay, Josh Spratt and Tyler Samodral all scored for the Hawks, while netminder Matthew Tovell stopped 29 of 30 shots for the win. Spratt and Tovell were named as the game’s first two stars.

Despite the winning streak, the Hawks fell to nine points behind the Ottawa Junior Senators in the race for first place in the Central Canada Hockey League’s Yzerman Division, as Ottawa made up two games in hand last week.

Hawkesbury is scheduled to play a rematch against the Braves in Hawkesbury on Tuesday, March 1. The Hawks are also home to the Smiths Falls Bears on Wednesday, March 2.