Site plan in works for Ford warehouse property, watermain being tested between Cheney and Limoges 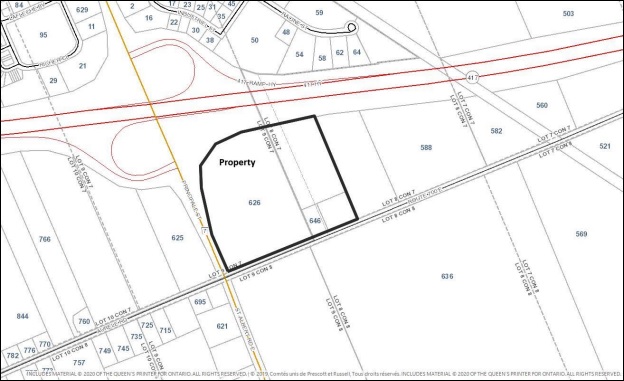 Map of the property and surrounding area for the new Ford Motor Company of Canada distribution centre in Casselman. La Nation municipal document

A site plan agreement is being developed for the property where the new Ford Motor Company of Canada distribution centre is being constructed on the southern boundary of Casselman with La Nation.

The site is located between Highway 417 and Route 700, southwest of the interchange with St-Albert Road and Principale Street. The facility will have three driveway accesses from Route 700.

At the February 10 La Nation council meeting, Planner Guylain Laflèche said the site plan is being developed jointly between both municipalities. He said a full presentation of the site plan agreement was to be made at a later time once revisions were complete. Lafleche said the plan was to be ready by February 15, but La Nation’s next regular council meeting is not until February 28. Council agreed to hold a special meeting before that time to give consent to the plan.

Construction on the 540,000 square foot facility is to begin soon. According to municipal documents, construction costs are estimated at $60 million. Construction is to be complete in February 2023.

The construction project to connect Limoges with a new municipal water supply from Cheney in Clarence-Rockland is on budget. La Nation Director of Water and Wastewater Doug Renaud presented an update to council on February 10.

The watermain is now in the testing and commissioning stage and is 90 per cent complete overall. The new chlorination facility is to be completed in March and commissioned shortly after.

Renaud said there have been 19 change orders during the engineering and construction of the watermain which have led to a combination of credits and additional costs. A contingency fund of $1.04 million was budgeted when the project began and 20.2 per cent of the amount has been used.

More than 10 kilometres of pipe has been laid in the ground for the $10,447,995 project, which connects the Cheney water tower to the Limoges system, mostly following Indian Creek Road. The work began in August 2021.

St-Amour called the update on the Cheney to Limoges watermain project good news.