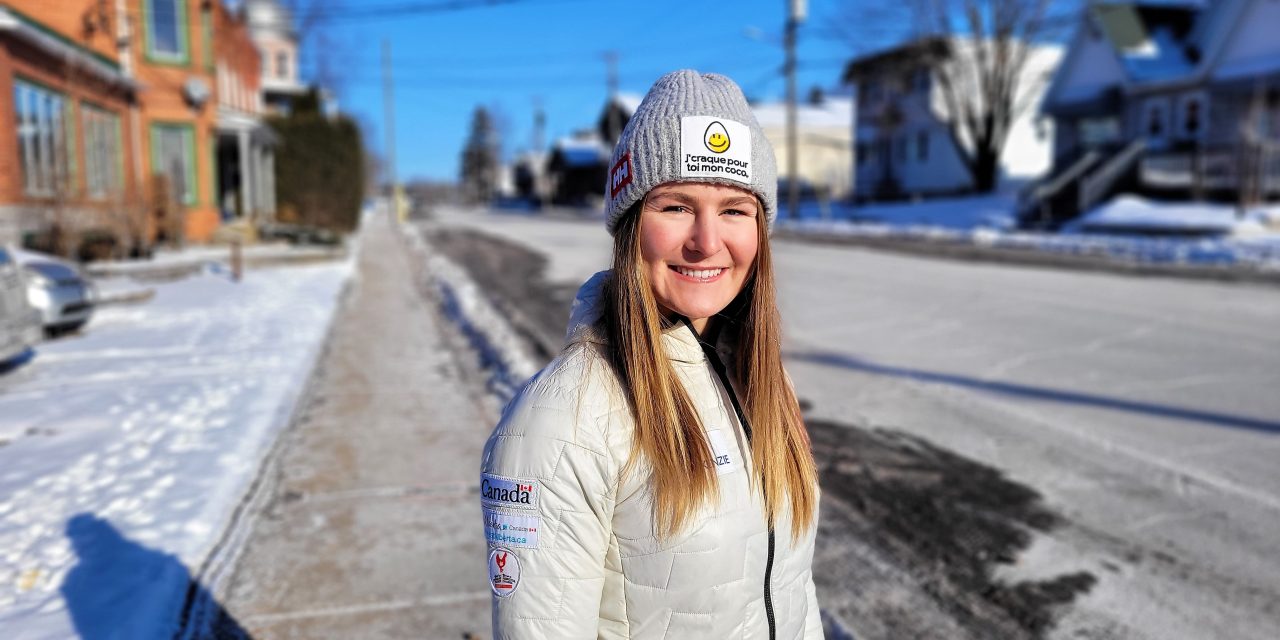 Winter Olympic hopeful Valérie Grenier was able to spend a few days back at home in L’Orignal in between stops on the World Cup Women’s ski circuit. Photo: Reid Masson

Valérie Grenier has a legitimate medal shot in Women’s GS

Area residents will have a local hero to cheer for when L’Orignal’s Valérie Grenier hits the slopes at the upcoming Winter Olympics in Beijing, China.

With the best results of her World Cup career, Grenier, who grew up in St-Isidore, has established herself as a solid medal contender in Women’s Giant Slalom (GS) – posting a career-best fourth-place finish in the women’s World Cup GS race in Slovenia just two weeks ago. And she did it under considerable adversity, with minimal training, after missing three races due to injury.

“It was pretty amazing finishing fourth, especially after everything that happened,” said Grenier last week, while home in L’Orignal during a break in the World Cup season.

In the season-opening Women’s World Cup GS race in Austria on October 23, 2021, Grenier raced to a seventh place finish – at the time a personal best. But on December 11 her entire season was suddenly put in doubt, when Grenier crashed during a training run in Livigno, Italy and fractured the tibia plateaus in both of her knees.

“They were very minor fractures, but it was still an injury,” she recalls. “It really upset me and I didn’t really know what was going to happen.”

After missing three GS races in a row, Grenier was able to resume training again and felt healthy enough to enter the World Cup GS in Slovenia on January 8. Finishing eighth in the first run, the 25-year-old racer then streaked down the mountain and posted the third fastest time in second run. From there it was a tense wait for the top seven skiers from the first run to complete their second attempts.

“When I came down in the lead I was very excited, because I knew I would keep my eighth spot or maybe move up – but then I just kept moving up and up and up,” Grenier remembers. “I was staying in the leader box and we just kept looking at each other and they were saying ‘maybe you’re going to podium’.” 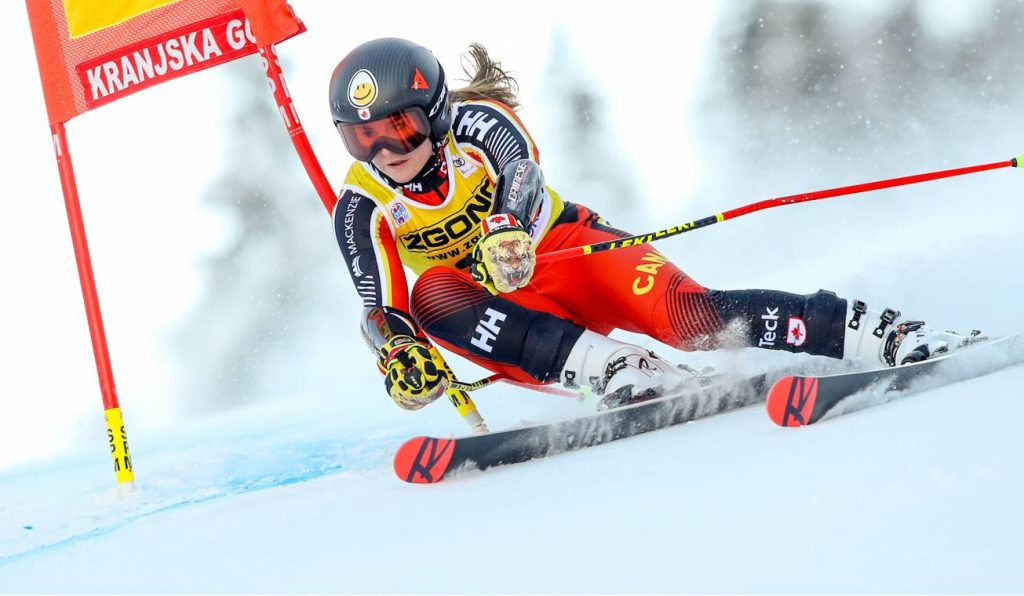 Grenier admits to a mixed bag of emotions after being bumped off the podium by the top three skiers and missing out on a medal by .07 of a second.

“I was already so happy with my results, but then to miss the podium by seven one-hundredths of a second – it’s so little that it was a pretty big sting. It’s like ‘man, I was so close’. But I’m still extremely happy. It really proves to me that I’m doing things right now and my skiing is right there. It really give me a lot of confidence for the next races.”

The 2022 Winter Olympics will be held in Beijing from February 4-20, where Grenier will represent Canada in the Women’s Giant Slalom competition on February 7. The graduate of École secondaire publique Le Sommet in Hawkesbury says competing in the Olympics has been a dream since she first began skiing as a young child with her parents Gabriel and Natalie at Mont Tremblant.

“From the beginning I always dreamed of going to the Olympics and being on the World Cup circuit – it was always my goal,” Grenier says, before breaking into laughter. “I’m not sure how it happened.”

So exactly how does one become a world-class ski racer growing up in St-Isidore? 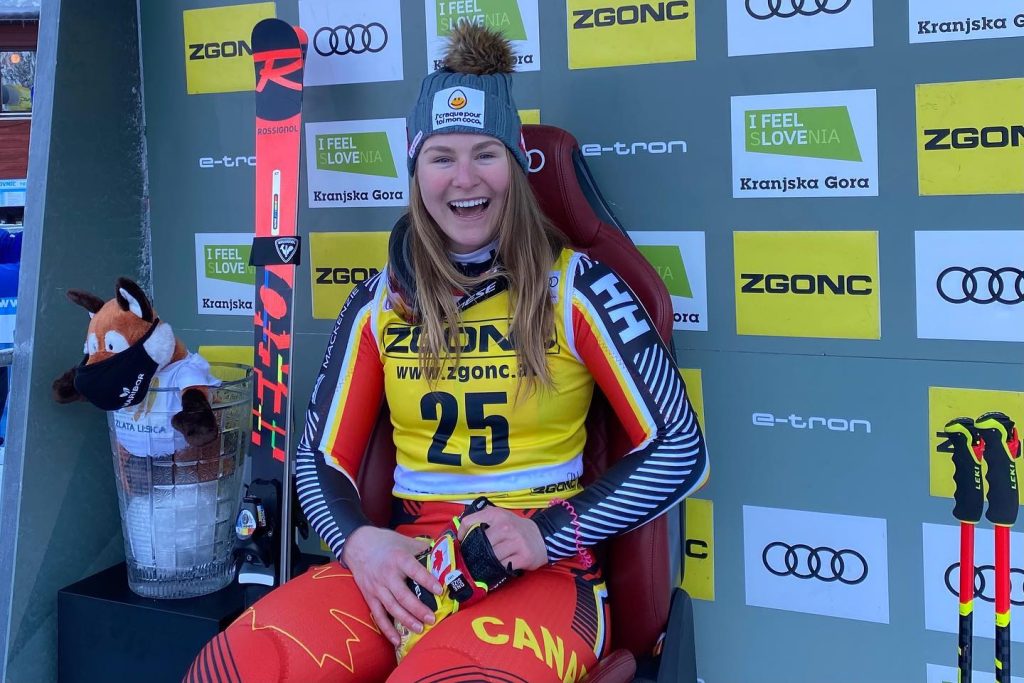 “I started skiing in Tremblant because my parents really loved the sport when I was around two. I just really fell in love with it right away. I did it more and more and they put me in ski lessons and a racing group. At first I wasn’t going very fast, but then I started going pretty fast and enjoying it.”

Grenier burst onto the international ski racing scene when she captured a bronze medal at the 2015 World Junior Championships. A few years later, at 21, she competed in her first Olympic Games at PyeongChang in 2018, starting in the giant slalom, super-G, downhill, and alpine combined.

Injuries then derailed Grenier’s skiing career, forcing two major operations on her right leg after she suffered multiple fractures (tibia, fibula and ankle) to it during downhill training at the World Championships in February of 2019. She was forced to sit out the entire 2019-2021 season while recovering.

Back with a vengeance

Grenier returned to the slopes with a vengeance in 2020-21, skiing to four top-30 finishes, as she focused on giant slalom. In 2021-2022, Grenier is currently tied for 14th in Women’s GS standings, despite competing in only two of the five events.

She credits her recent personal bests to experience and being more consistent in her technique. 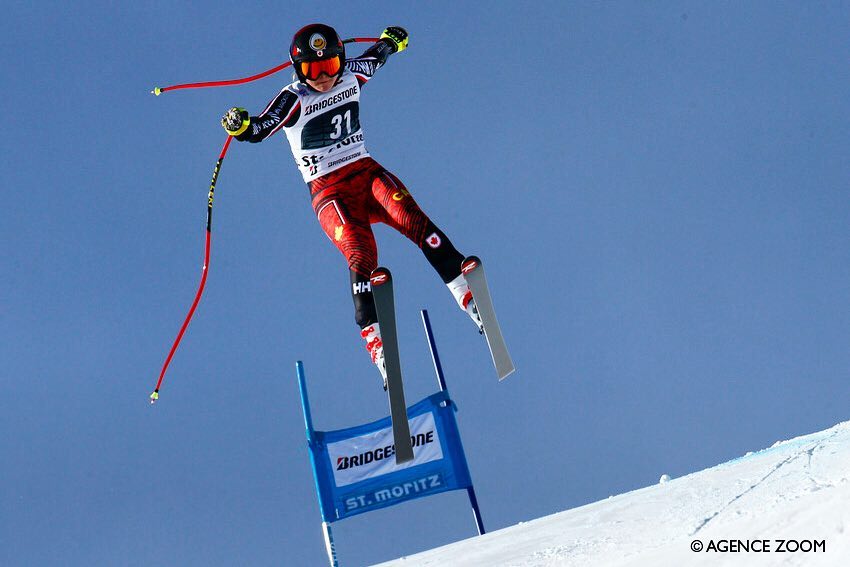 Grenier, seen here in 2018, says her technique is more solid today: “I used to go out a lot and DNF – either fall or not finish the course. Now I feel like I’m more solid and I really stay strong until the end of the course.” Photo: Valérie Grenier Facebook

“I used to go out a lot and DNF – either fall or not finish the course,” Grenier explains. “Now I feel like I’m more solid and I really stay strong until the end of the course.”

I used to get a little bit back seat and now I’m more on top of it. I’m more in control instead of trying to catch up all the time.”

After her brief trip back home to L’Orignal, Grenier headed back to Europe, where she finished eleventh in her final tuneup for the Olympics on January 25 at the Women’s World Cup Giant Slalom in Kronplatz, Italy. Although she has high hopes for the rest of the season and the Olympics, Grenier notes this year is just another step in her journey.

“I really want to be a part of the best girls in the world,” says the determined athlete, who posts videos of her workout routines on her Instagram page. “I want to be consistent and always pushing.”

“I really want to be on the podium.”

In need of wheels

Most of all, she needs wheels to travel to her trainer and training location at Mont Tremblant, as well as back and forth to the Robert Hartley Sports Complex in Hawkesbury, where she does many of her workouts.

“I have a pretty old car and I’m really looking for a car sponsorship from a dealership,” Grenier says. “I think it would be a cool opportunity if somebody is interested.”

While she competes around the world, Grenier says she has little time to enjoy the spectacular locations she visits. The same goes for when she is at home, where she spends most of her hours either training, hanging out with her fellow skiers, or spending time with family.

“My friends are mostly my family and the girls on the team,” she says, adding that few people recognize her while she is training, even in her hometown. “I’m not famous. Some people recognize me, but I think it’s because they know me from high school.”

“Maybe more in Tremblant when they see me on the hill,” Grenier says, adding with a laugh, “they recognize my suit!”

Grenier (right) with her alpine teammates after being officially named to Canada’s ski team at the Beijing Winter Olympics. Photo: Valérie Grenier Facebook 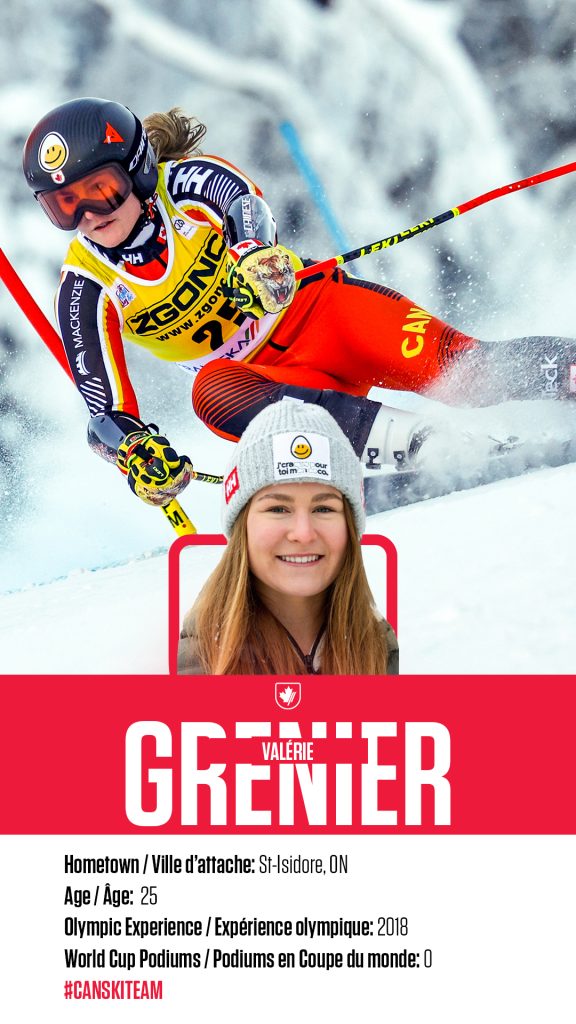