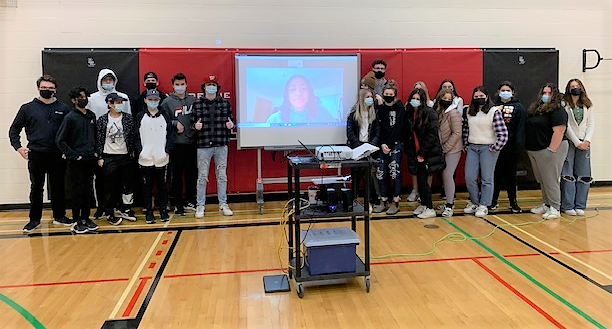 Physical Education students at VCI were inspired by a talk from Canadian Olympian Jayde Riviere on Monday, November 29. SUBMITTED PHOTO

Physical education students at Vankleek Hill Collegiate Institute had the opportunity to listen to Jayde Riviere talk about her career as a young athlete and member of Canada’s gold-medal-winning women’s Olympic soccer team, on Monday November 29.

Riviere spoke to the students from her room at the University of Michigan, where she is currently playing soccer on a full scholarship. Herself just 20 years old, Riviere talked to the students about her high school experience, her first few years of university, COVID-19, work ethic, and of course, the 2021 Summer Olympic Games in Tokyo.

Riviere was fortunate to have a strong support system and she mentioned that her father had always stressed the importance of having a strong academic career. She turned down a few opportunities to play professionally at a younger age, instead choosing to play for the University of Michigan.

While her high school career was probably a lot different than that of VCI students, Riviere noted there were still some similarities. She was fortunate enough to attend Bill Crother High School in Pickering which, she described as a “sport-school”, where you need to apply and be accepted to attend. Because of this, she was able to move to Vancouver for a few months at the age of 16 to join the Senior National soccer program. Riviere first made her appearance with Team Canada at the age of 14.

The Team Canada player talked about all the opportunities that soccer has given her to travel around the world and feels very fortunate. She also mentioned that none of this would have been possible if she had not been dedicated to her studies and demonstrated a level of maturity above and beyond the expectations.

Riviere reminded students of the importance of being humble. She spoke from experience and said that she saw this happen firsthand, where “players were great on the soccer field or on the basketball court, but their mouth got them in trouble”.

Honoured to be chosen to be part of the women’s Olympic soccer team this summer, Riviere said that on her “bucket list” she wanted to be an Olympian as a teenager, however because of the delay to the 2020 Olympics, caused by the pandemic, she had to settle for being an Olympian at the age of 20. It was worth the wait, Riviere said.

Hannah Jackl asked about the whole Olympic experience and asked her about her favorite and most difficult memories at the Olympics. Riviere said that her favorite moment was definitely winning the gold medal in a shootout versus Sweden. She also mentioned that the Olympic gold medal has not really sunk in just yet. 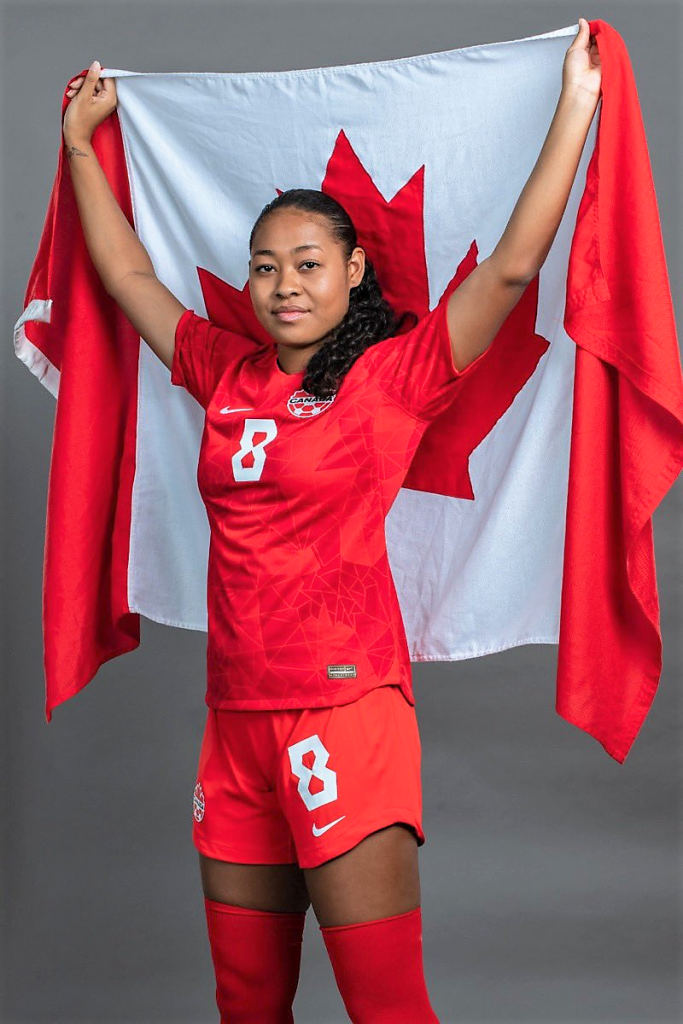 “It was a great moment for me, but it was amazing to see how it affected returning players who had been there before, like Christine Sinclair, and the wave of emotion and effect of changing the bronze-coloured medal to a gold one had on them,” the Olympian explained.

Spencer MacKinnon asked Riviere about her commitment to training and the amount of time she needs to dedicate to the sport to stay at that level. Riviere said that in high school she would spend 4-5 hours a night practicing after school with her competitive team and her father.

Mitchell Durocher asked about the preparation that was needed prior to her Olympic Games and if it was different during “big games” such as the Olympic gold medal game. Riviere mentioned that she was a big believer in mental imagery. She has been trained for many years to “turn things off when the whistle blows to start the game”. She stressed the importance of being focused and having a good routine that works for you, so you don’t get surprised. However, she did say that it can sometimes be difficult when there are thousands of people in the stadium (Olympics) vs a few hundred at some high school or university games.

Riviere noted her pathway to success has not always been easy, as she has needed to deal with some bullying and some racism along the way. Showing maturity and overcoming those hurdles is something of which she is very proud.

“It was quite an honour to have a strong young woman speak so eloquently to students who are only a few years younger than she is,” said VCI physical education teacher Dan Tremblay. “High school students who had the opportunity to listen to Jayde speak certainly were treated to not only a great Canadian athlete, but a very humble and down to Earth person who can certainly be viewed as a role model for people of any age.”