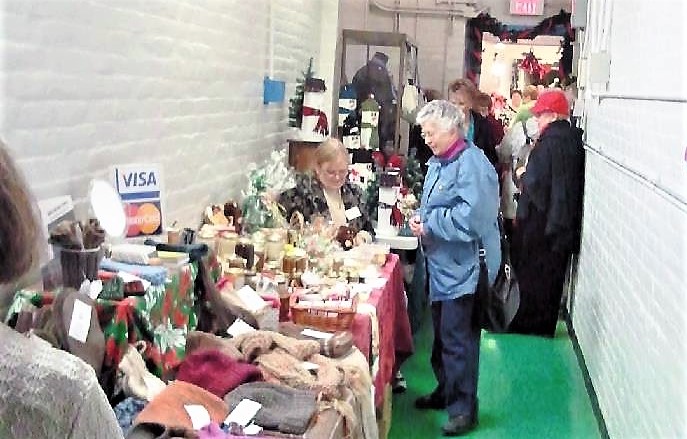 Hundreds turned out for the Christmas market at L'Orignal Jail in 2011. Photo Review Archives

10 Years ago
St. Amour named new UCPR Warden
The Review, November 23, 2011 – THE NATION – The Nation Mayor Francois St. Amour will be the next warden for the United Counties of Prescott-Russell (UCPR). St. Amour is one of several newcomers around the counties’ council table. The only veteran mayors left after the election were Alfred-Plantagenet Mayor Jean-Yves Lalonde, Champlain Township Mayor Gary Barton and East Hawkesbury Township Mayor Robert Kirby.

25 Years Ago
Bank robber offers season’s greetings
The Review, November 27, 1996 – HAWKESBURY – The Caisse Populaire on Main Street was held up at gunpoint on Thursday afternoon, by a bandit who expressed season’s greetings before leaving with a bag of cash. The robber, wearing dark jeans, a black bomber jacket and what appeared to be a false beard and wig, vaulted the front counter’s gate, approached the main cashier and asked for money. The French-speaking man left with a bag of money, wishing everyone a Merry Christmas and a Happy New Year.

50 Years Ago
Former Laniel Garage gutted by fire
The Review, November 24, 1971 – HAWKESBURY – Fire which broke out around 3 a.m. Tuesday completely gutted a garage owned by P. Ouimet & Sons Construction at 170 Main Street West in Hawkesbury. Lost in the blaze were nine fully equipped construction trucks, along with equipment and materials. The loss is estimated at $150,000. The building across from CIP Research was purchased from Laniel Auto Limited in 1969.

75 Years Ago
New ‘Regent’ theatre to open in Hawkesbury
The Review, November 27, 1946 – HAWKESBURY – A new movie theatre to be known as the ‘Regent’ will soon open in Hawkesbury. Situated on Main Street, the building is modern in all respects and is entirely made of fireproof construction. To satisfy the ever-increasing demand for talking pictures, Oscar Legault, the owner, started the construction of this up-to-date building during the past year. The town will soon be served by two modern theatres, the ‘Regent’, opening a few days before Christmas, and the ‘Ottawan’, both being situated on Main Street.

100 Years Ago
Heard on the streets in 1921
The Review, November 25, 1921 – VANKLEEK HILL – With three candidates in the field in Prescott County, this election should have some choice in the selection of their Member of Parliament. The funniest thing about the whole business is its fascination. It is just as much sport for us to watch the activities of each candidate, listen to their insincerity and admire their ability to turn a corner sharply, as it is to watch a horse race. It certainly is a great game if you do not weaken.

125 Years Ago
Store owner teaches culprit a lesson
The Review, November 20, 1896 – VANKLEEK HILL – A scrap took place on Main Street Wednesday at noon, during which a pane of glass in P.T. Saucier’s jewelry store was broken by an object thrown by one of the combatants. This aroused the ire of Mr. Saucier, who went out and administered to the culprit a little physical instruction that will no doubt be remembered by him for a day or two. The two travelers appeared before His Honor later in the day and were released from custody after promising to leave town forthwith for good and all.