Cougars moving up in NCJHL standings after pair of weekend wins 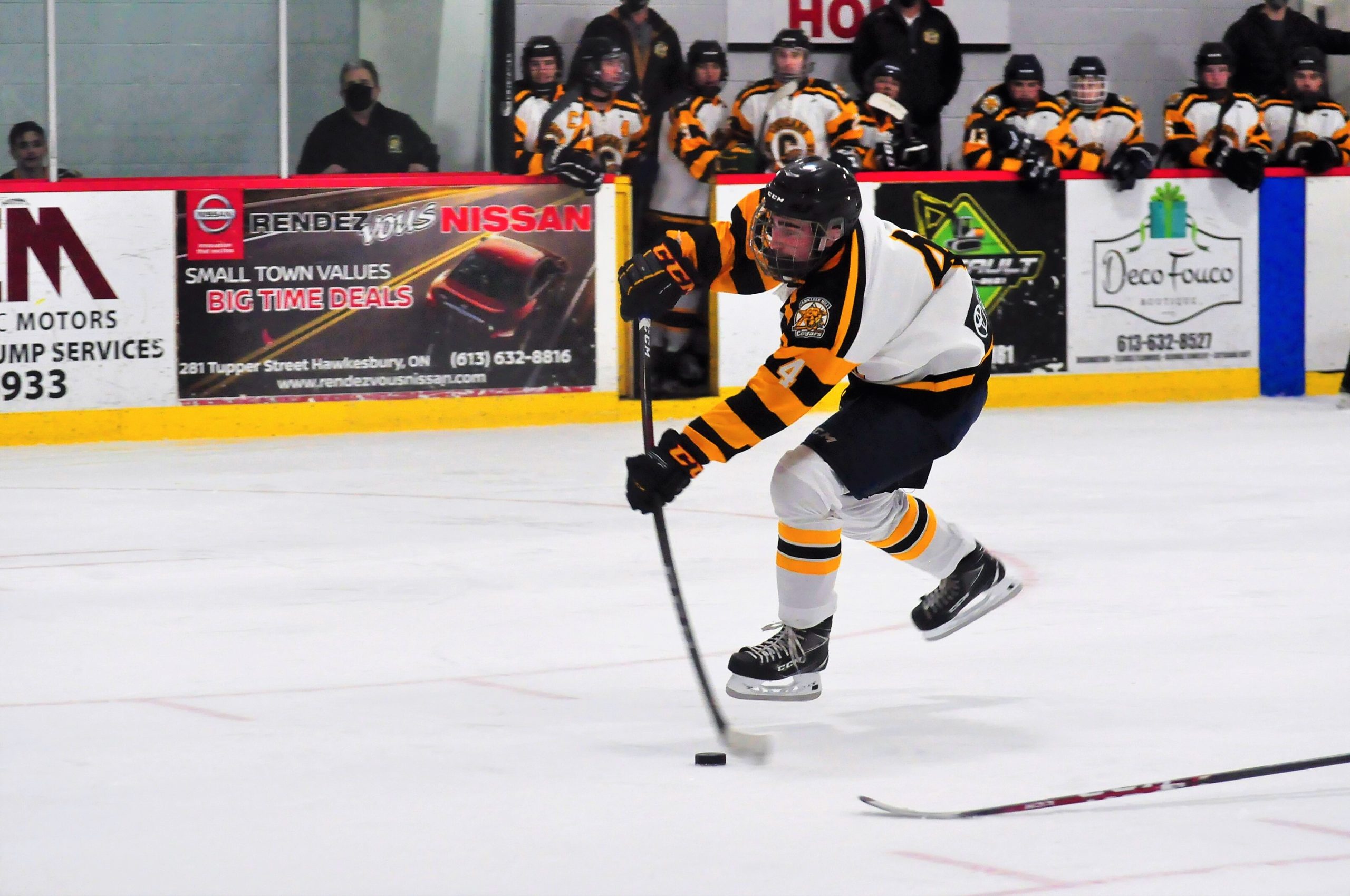 Cougars forward Jérémy Marcotte (4) fires home one of his three goals against the Metcalfe Jets, in an 11-1 victory for the home squad at the Vankleek Hill Arena on Saturday, November 13. Marcotte was named player of the game for his performance. PHOTO: BARRY GOUDREAU

It’s a modest two-game winning streak, but the Vankleek Hill Cougars will take it.

The Cougars came out flying after their week off, notching a pair of wins last weekend, including a comeback 4-2 win over the St-Isidore Eagles in a road game on Sunday, November 14. The win made it two in a row for the Vankleek Hill squad, after their 11-1 pounding of the Metcalfe Jets the previous night at home.

On Sunday, St-Isidore jumped out to a 2-0 lead in the first 10 minutes, as things looked bleak for the visiting Vankleek Hill squad, which was back on the ice less than 24 hours after beating the Jets. The Cougars stormed back however, tying the game with two goals in the second period, and then notching two more in the third for the 4-2 win.

“We finished the first period with lots of momentum and what we started in the first carried over into the second,” said Cougars Head Coach Franky Dopelhamer.

Justin Chaumont fired home the winner for the Cougars at 13:48 of the third and Zack Labbé sealed the deal for the visitors with an empty-net goal late in the final minute of the game while Vankleek Hill was shorthanded. Jonathan Campbell and Nathan Sauvé started the comeback for the Cougars with single markers in the second period. With a goal and an assist in the game, Chaumont moved into second in league scoring, with 21 points, including 11 goals in just 11 games.

Frederick Duroucher-Bourdon was outstanding in net to earn the victory, stopping every shot he faced in the second and third periods after surrendering two in the first.

“(Duroucher-Bourdon) played his best game of the year when we needed it,” said Dopelhamer, who was also extremely pleased with the play of the Cougars’ defensive core. “We didn’t give up any breakaways, we didn’t give up any odd-man rushes and we were responsible defensively – our defence played excellent.”

On Saturday, November 13, the Cougars showed little mercy against the winless Jets, as both Jérémy Marcotte and Joshua Renaud notched hat tricks in an 11-1 victory on home ice at the Vankleek Hill Arena. The game was scoreless in the first period, before the Cougars turned on the jets, with five goals in the second period and six more in the third.

With the two wins, the Junior C Vankleek Hill team made a big jump in the National Capital Junior Hockey League (NCJHL) standings. The Cougars remain in sixth place, but are now just one point behind the fifth-place Eagles, with a game in hand. Vankleek Hill also moved within two points of the North Dundas Rockets, who currently occupy fourth.

The Cougars added an important piece to the puzzle this week, as local player Andy Lightle-Blais joined the team and recorded an assist in his first game last Saturday against the Jets. Lightle-Blais, who is from Vankleek Hill, had been playing with the Alexandria Glens of the Junior B Eastern Ontario Junior Hockey League, where he recorded five goals and eight assists for the Glens in 43 games during the 2019-2021 season.

“He’s a high-calibre  player and we’re expecting big things from him,” Dopelhamer said. 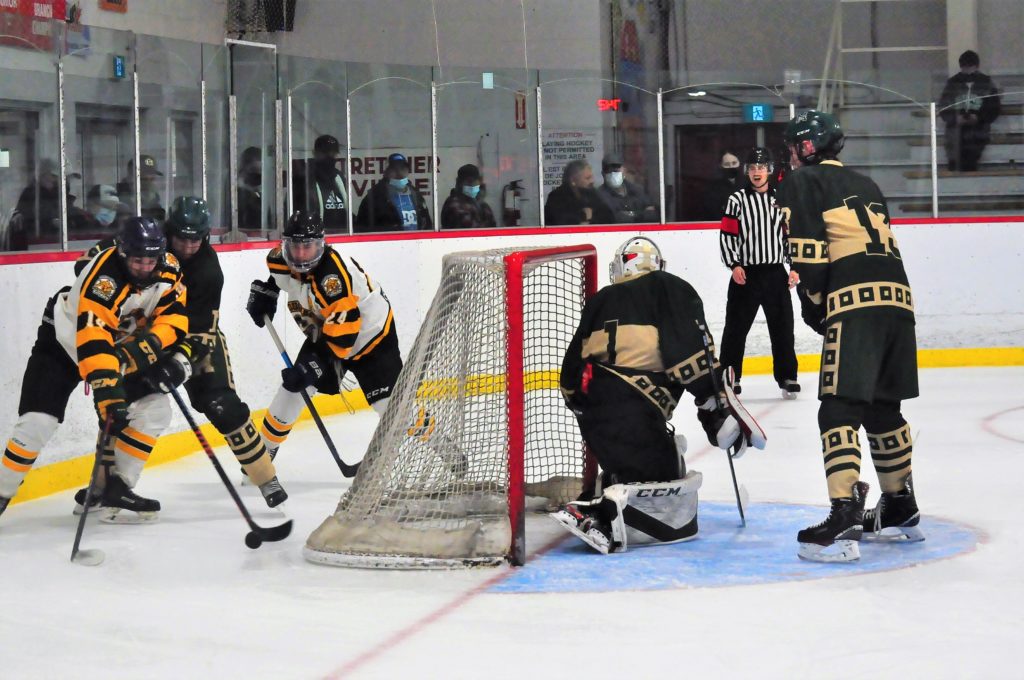 Cougars forwards Nathan Sauvé (14) and Joshua Renaud (24) battle for the puck behind the net against the Metcalfe Jets on Saturday, November 13. Renaud scored a hat trick and added an assist in the game, while Sauvé notched a goal and an assist in the Cougars’ 11-1 win. PHOTO: BARRY GOUDREAU 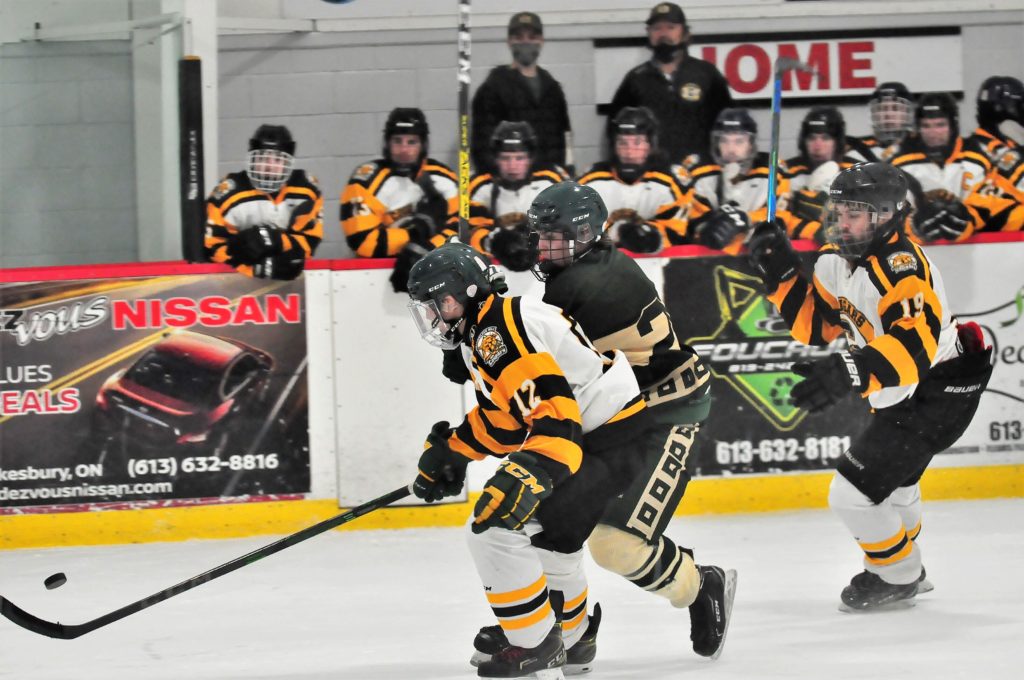 Zachary Bigras (12) and Maxim Lalonde (19) battle for the puck alongside the home team’s bench during Vankleek Hill’s game against Metcalfe on Saturday, November 13. PHOTO: BARRY GOUDREAU