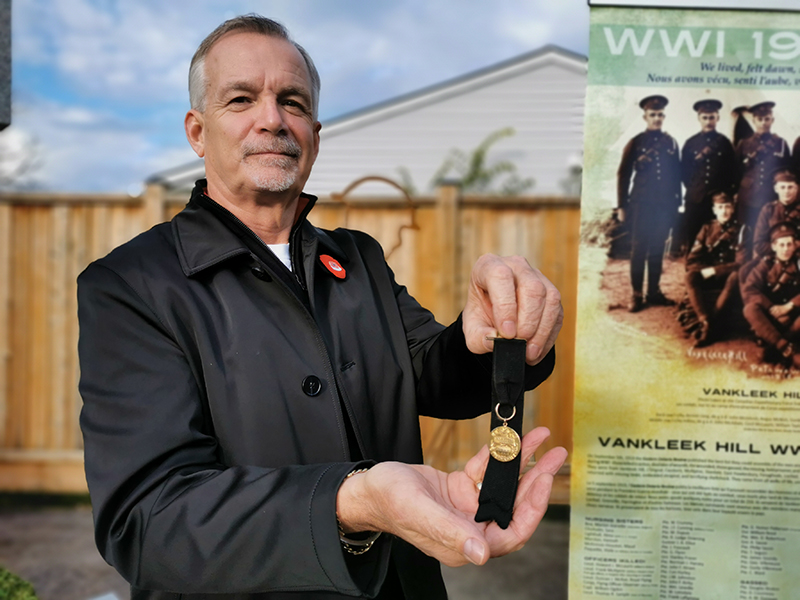 World War I soldiers were commemorated on a banner created by the Vankleek Hill Historical Society. Doug Rogers is seen here showing a medal presented to his grandfather–William Taylor “Willie” McIntosh–in September 1919 at a reception in Vankleek Hill. PHOTO: LOUISE SPROULE

It was a banner day in every sense of the word at this year’s Remembrance Day ceremony in Vankleek Hill.

A banner commemorating 259 World War I soldiers was unveiled after the community’s Remembrance Day ceremony and descendants of World War I veteran William Taylor “Willie” McIntosh–a native of Vankleek Hill–were in Vankleek Hill for the occasion.

Although World War I ended in 1918, it was 100 years later when Guy Rogers, a descendant of McIntosh, was driving through Hawkesbury one day and recalled that his grandfather was from nearby Vankleek Hill.

“I googled Vankleek Hill and this photo popped up. And my grandfather was in it,” said Rogers, referring to the photo on the banner called the “Vankleek Hill Boys.”

And so began the Rogers’ family research into the photograph to find out the names of the other soldiers.

Guy says he visited Vankleek Hill and as he walked the streets, he thought about his grandfather and whether he had walked the same streets a century ago.

In the ensuing months, he contacted the Vankleek Hill Historical Society and began researching in The Review’s online archives to find out more about his grandfather and the photograph. When he learned that medals had been presented to 95 returning soldiers and nurses in September 1919 at a celebration in Vankleek Hill, he mentioned it to his brother.

“And my brother had the medal,” says Guy, who brought it along to Vankleek Hill on Sunday.

Guy says his grandfather returned to Vankleek Hill and went on to become a doctor and a dentist. He built a house at 160 Main Street East.

Guy recounts that in 1939, his grandfather was once again ready to enlist and serve his country, this time as a member of the Canadian Army Dental Corps, which had been established in 1915.

Although he was told he didn’t have to go back, “That’s just the kind of person my grandfather was,” Guy says, adding that he regrets not knowing him better. Guy was 10 when his grandfather died.

The banner includes the photo of the “Vankleek Hill Boys”, a list of 259 World War I soldiers and an image of the gold medal presented to William Taylor “Willie” McIntosh (seated on the blankets at the far right of the picture).

The history inspired historical society volunteer Michelle Landriault with the idea of a banner. Landriault enrolled graphic designer Ben Martin to pull the images together and create a design. When the Rogers family learned of the project, they offered to sponsor the cost of producing the banner.

The banner is available for short-term loans to schools and local events and is making the rounds as Remembrance Day ceremonies are celebrated locally.

The photograph which sparked this project was a photograph taken at a training camp in Petawawa; the photo belonged to the late Ken and Daisy Brock. 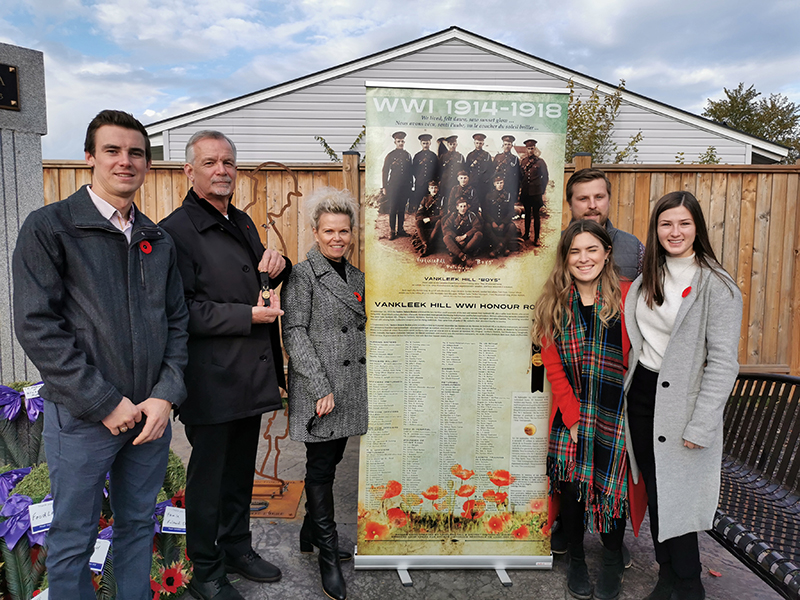 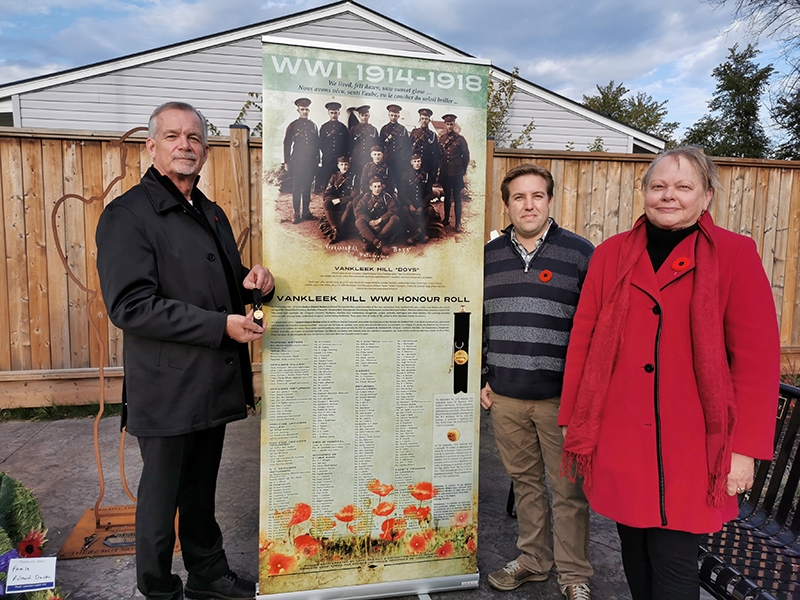 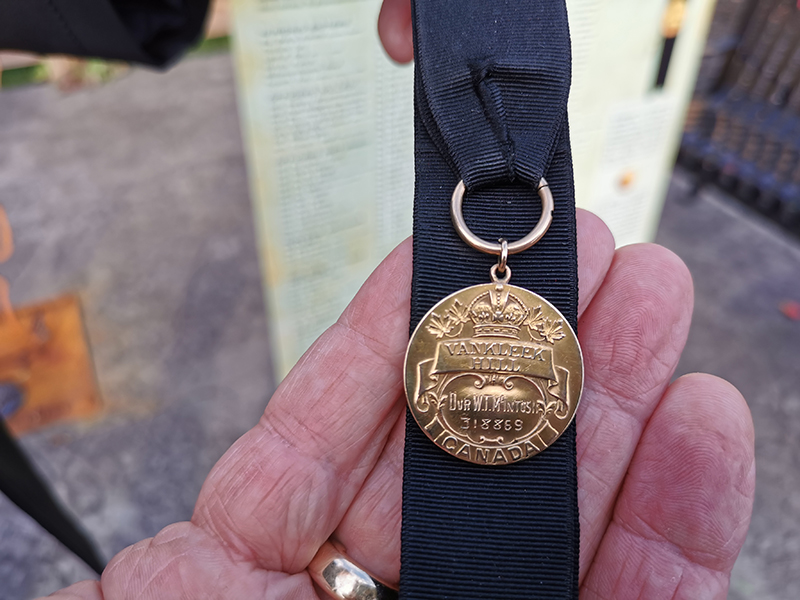 Gold medals like this one were inscribed with the names of World War I returning soldiers and nurses at a September 1919 reception in Vankleek Hill. PHOTO: LOUISE SPROULE 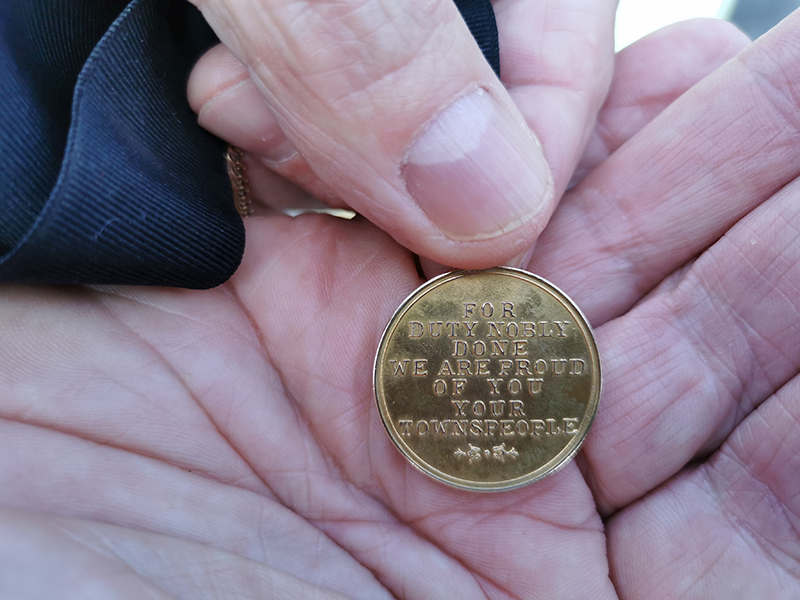 Gold medals like this one were presented to World War I returning soldiers and nurses at a September 1919 reception in Vankleek Hill. PHOTO: LOUISE SPROULE