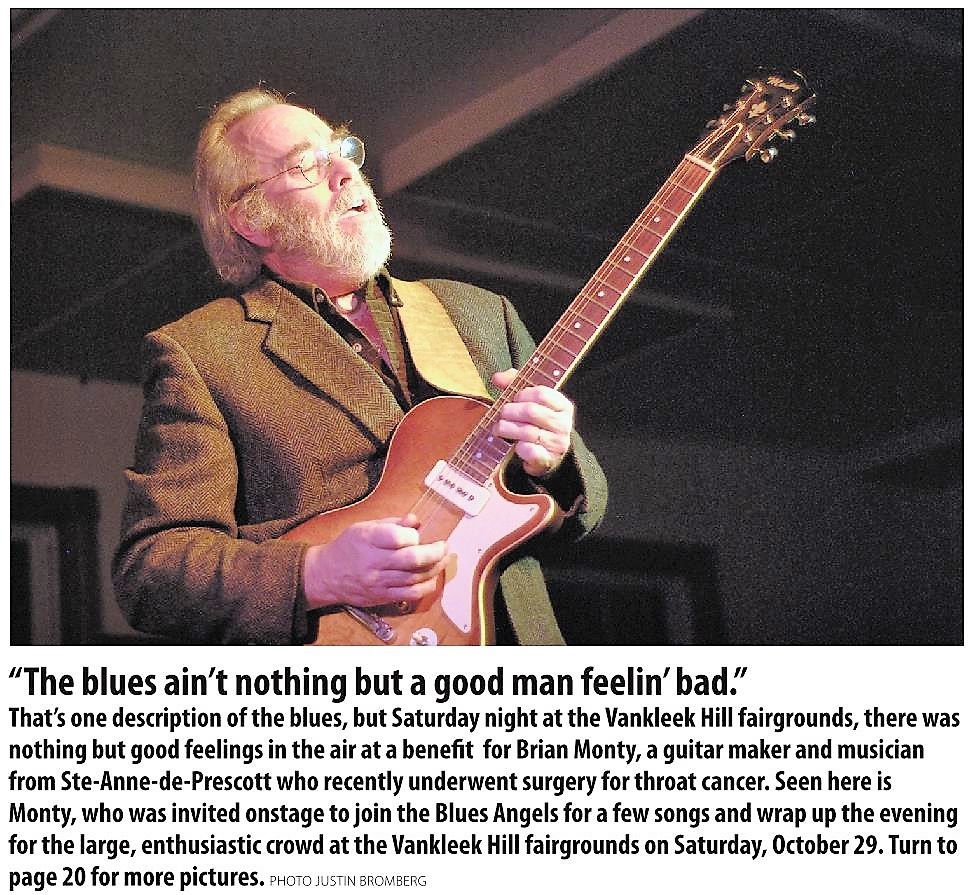 Local guitar maker and musician Brian Monty plays at a fundraiser held at the Vankleek Hill Fairgrounds in 2011. The event was held to raise funds for Monty, who had recently undergone surgery for throat cancer. Click on the photo to see the full caption as it appeared in the November 2, 2011 edition of The Review. Archive photo

10 Years ago
Crime spree ends with arrests
The Review, November 2, 2011 – HAWKESBURY – The Ontario Provincial Police detachment in Hawkesbury has closed the book on four robberies that took place in September. Two individuals, including a 16-year-old female, were arrested in connection with the robberies in Hawkesbury and Orleans. Two Tom Horton’s outlets in Hawkesbury were hit by the robbers, along with the TD Bank in Hawkesbury, and the Caisse Populaire in Orleans.

25 Years Ago
Four municipalities agree to merge
The Review, November 6, 1996 – L’ORIGNAL – Councillors of the Village of L’Orignal, the Townships of Longueuil and West Hawkesbury and the Town of Vankleek Hill have voted to merge into one municipality as of January 1, 1998. Each municipality will become a ward of the new, larger township, with each ward electing two representatives to serve on the new council. One mayor will be elected at large.

50 Years Ago
Hawkesbury honors sportsmen
The Review, November 3, 1971 – HAWKESBURY – Michel Leveille and Donald Prentiss were the toast of the Hawkesbury Minor Hockey Association’s Sportsman’s dinner last Friday. Leveille, star flanker with the University of Ottawa Gee Gees and the second draft choice of the British Columbia Lions, was named the town’s outstanding athlete and winner of the Noel Berthiaume Trophy. Prentiss, who has been active in minor sports programs in the town, was named as Sportsman of the Year.

75 Years Ago
Local young man in auto accident
The Review, November 7, 1946 – VANKLEEK HILL – While returning from Grenville, Quebec, in a 1946 Ford V-8 on Friday evening last, Wallace Waite, of Vankleek Hill, lost control of his car while meeting another vehicle near the residence of Clarence Sproule on John Street in Hawkesbury. The car turned over and landed in Mr. Sproule’s yard, causing an estimated $680 in damage. Arthur Dupuis, a passenger in the car, was taken unconscious to Notre Dame Hospital in Hawkesbury, but is now back home in Vankleek Hill. A charge of reckless driving has been laid against the driver.

100 Years Ago
VKH ratepayers thunderstruck
The Review, November 4, 1921 – VANKLEEK HILL – Our Town Council held two meeting this week and new rates were set that the ratepayers will be thunderstruck upon hearing the figures: 6.35 for public school supporters and 6.77 for separate school supporters. And the mayor thought that after this was done he could have all the money he wanted at the bank. But nix! Nothin’ doin’ yet.

125 Years Ago
Skating rink proposed for Alexandria
The Review, November 6, 1896 – ALEXANDRIA – A skating rink is being contemplated for Alexandria. There is every prospect of a first class skating rink during the coming winter. It is also proposed to run in connection with the ice rink a curling club and who knows by the end of winter many of our citizens may have proved themselves adept at the game.