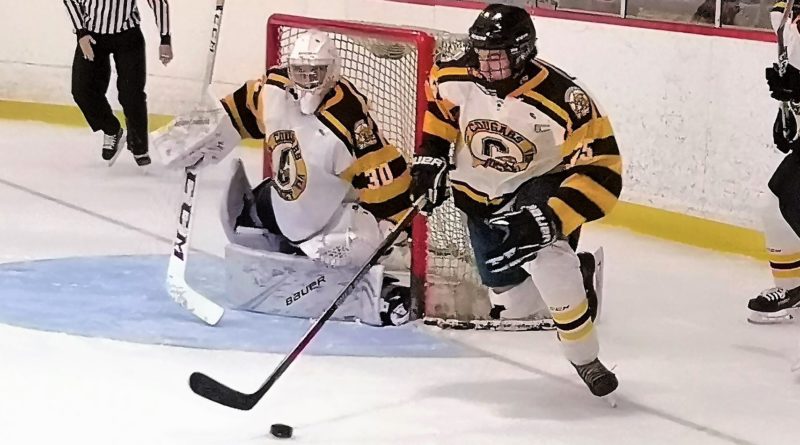 The Vankleek Hill Cougars snapped their three game losing streak in a big way last weekend, as Zach Bigras fired home the winner in overtime for an exciting 5-4 win over the Gatineau-Hull Volant in front of an enthusiastic home crowd on Saturday night, October 30.

The Cougars led 1-0 after the first period and 2-1 after the second, but the Volant stormed back with three goals to take a 4-3 lead late into the third period. With goaltender Frederick Duroucher-Bourdon pulled for an extra attacker, Justin Chaumont tied up the game to send the local crowd into a frenzy. That set the table for Bigras overtime winner to send the local fans home with smiles on their faces.

“We needed the win there – especially at home and with such a good crowd,” said Cougars Head Coach Franky Dopelhamer. “It was really fun to see the reaction of the (fans) and the players after we won the game.”

Chaumont had two goals and an assist on the night for the local Junior C squad, while Bigras, Simon Levac and Jérémy Marcotte added singles. Duroucher-Bourdon played all 60 minutes in net to get the win.

On Sunday, October 31, the Cougars fell 4-1 to the first-place Clarence Castors. Joshua Renaud scored the lone marker for the Cougars, who fell behind 2-0 in the first period and were never able to catch up.

“(Clarence is) going to be a good team this year,” said Dopelhamer, who noted the Cougars played well but were undone by a shaky third period, along with the stellar play of Castors netminder Corey Camirand.

“We matched up with them for two periods,” Dopelhamer sighed. “The last period was not too good.”

Despite the loss, the Cougars coach was pleased overall with the team’s play on the weekend.

“We played two of the top teams in the league and came out with a split,” Dopelhamer reflected. “Everyone wants to win all the games, but with a win and a loss against two top teams, we have to be happy with the way things came out.”

Vankleek Hill is currently in sixth place in the National Capital Junior Hockey League (NCJHL) with a record of three wins and six losses. Chaumont remains a bright spot for the team, sitting in third place in NCJHL scoring with 10 goals and six assists, for 16 points in just nine games.

The Cougars are idle this weekend and the team’s coaches will spend the next week and a half working on various areas where the team needs to improve. The players and coaches will also get to spend some bonding time together, with a bowling event scheduled for next weekend.

Dopelhamer said the team has received strong play from its veterans early in the season, as the younger members of the squad continue to develop. He is confident the Cougars will continue to improve as the season goes on.

“We’re going to be competitive – there’s no doubt in my mind,” the team’s head coach said.

The Junior C club returns to action on November 13, with a home date against the Metcalf Jets.