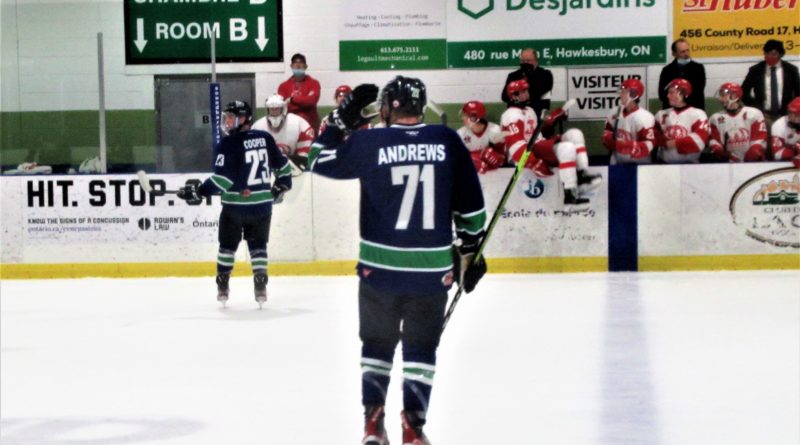 Defenceman Mark Cooper (23) and forward Michael Andrews (71) scored the first two goals, for the Hawks against the Pembroke Lumber Kings on Friday, October 15, as the team jumped out to a 2-0 lead in the first period. Photo: James Morgan

The Hawkesbury Hawks continue to roll, as the team stretched its winning streak to seven games with wins over Pembroke and Nepean last week.

The Hawks rolled over the Nepean Raiders 6-2 on Sunday, October 17, at the Nepean Sportsplex. Centre Josh Spratt had two goals in the victory, while, defenceman Mark Cooper, centre Jeremy Quesnel and forwards Rylee Hlusiak and Jakson Kirk each added single markers. Goaltender Max Donoso stopped 28 of the 30 shots he faced to earn the victory.

At home on Friday, October 15, the Hawks jumped out to a 2-0 first period lead over the Pembroke Lumber Kings before allowing two goals in the second period. The Hawks came out flying in both the third period and overtime, but were unable to beat Pembroke goaltender Reece Proulx.

Forward William Gendron finally sealed the victory for the Hawks by scoring the only goal in the shootout, as Donoso stopped all three Pembroke shooters.

With their seventh straight victory, the Hawkesbury Junior A squad solidified its hold on third place in the Central Canada Hockey League’s Yzerman Division. The team now sports a 7-3 record, after losing their first three games of the season, but Hawks Head Coach and General Manager Rick Dorval is expecting even more from his players as the season progresses.

“We got all four points, so you can’t complain from that standpoint, but we didn’t play our best hockey,” said the Hawks coach after the two weekend victories. “(Against) Pembroke we let them back into the game with two goals in the second period and I think we underestimated our opponent.”

“We made it a lot more interesting than we’d like, but at the end of the day we still got the two points.”

Dorval said the 6-2 score over the Raiders in Nepean was not indicative of the team’s level of play, noting the Hawks were outshot 30-37 by the home squad and were helped out by a great performance from Hawkesbury goaltender Donoso. However the Hawks coach added the season is still young and as the players develop as a group he expects these early struggles will help build character.

“On a positive note, we got four points and you come out with things as a team you need to work on – it builds chemistry and that bond in the knowledge of how we have to play for the team to be successful,” Dorval said. “It shows how good this team could be if we play the right way night in and night out.”

“We need to continue to get better. Even when you’re winning seven games and it seems like everything is rolling, it’s important to us that we still find the areas of our game that we need to improve on.”

The Hawks have two games again this weekend, including a home date against the Carleton Place Canadians on Friday, October 22. The start time for that game is 7:30 p.m. at the Robert Hartley Sports Complex.

On Sunday, October 24, Hawkesbury travels to Pembroke to face the Lumber Kings, in a rematch of last Friday’s narrow Hawks win. Dorval expects both games to be a test for the local squad, as Carleton Place will be looking to avenge two earlier losses to the Hawks this season, while the Lumber Kings will be out make up for last Friday’s loss.

“Both are going to be very tough games,” the Hawks coach noted. “We have to prepare to be up to the challenge.”

The Hawks are also hoping to grow fan support at home games. Last Friday’s crowd against Pembroke showed an increase over the first two home games and Dorval said team officials are hoping the Hawks’ current win streak will attract even more interest.

“Coming in at home on the weekend and having won five in a row, I think it intrigued people and I hope seven in a row will help engage even more fans to come out this Friday night and support the boys.” 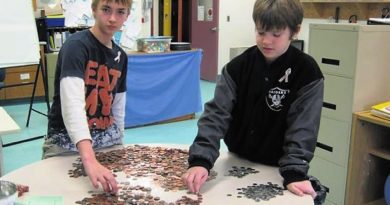